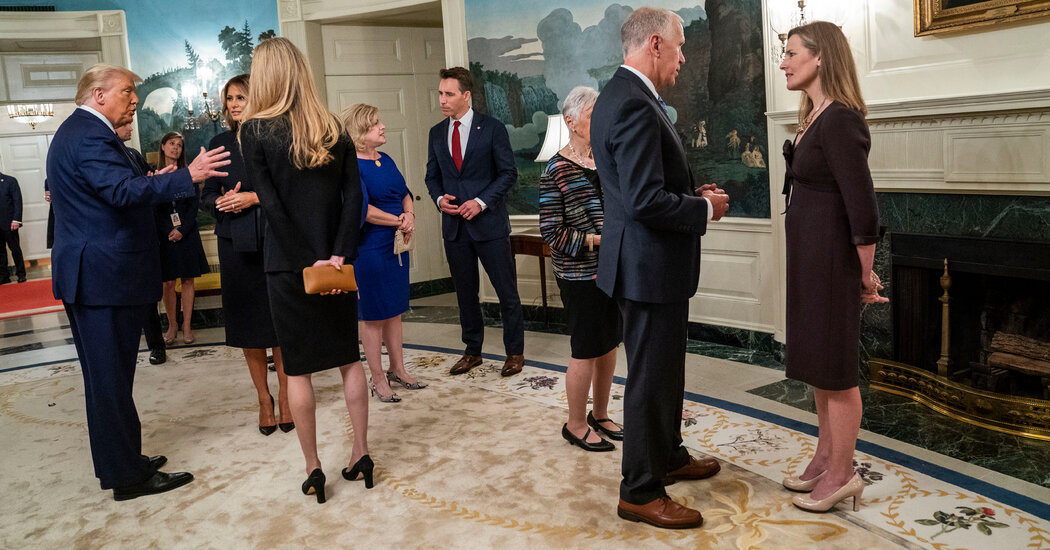 Two weeks after the Centers for Disease Control and Prevention took down a statement about airborne transmission of the coronavirus, the agency on Monday replaced it with language citing new evidence that the virus can spread beyond six feet indoors.

“These transmissions occurred within enclosed spaces that had inadequate ventilation,” the new guidance said. “Sometimes the infected person was breathing heavily, for example while singing or exercising.”

The incident was only the latest in a series of slow and often puzzling scientific judgments by the C.D.C. and by the World Health Organization since the start of the pandemic. Despite evidence that use of face coverings can help cut down on viral spread, for example, the C.D.C. did not endorse their use by the public until April, and the W.H.O. did not do so till June.

Regarding aerosols — tiny airborne particles — the C.D.C. lagged behind even the W.H.O. In July, 239 experts who study aerosols called on the W.H.O. to acknowledge that the coronavirus can be transmitted by air in any indoor setting and not just after certain medical procedures, as the organization had claimed.

Notably, the C.D.C.’s new guidance softens a previous statement referring to the coronavirus as “an airborne virus,” a term that may have required hospitals to treat infected patients in specialized rooms and health care workers to wear N95 masks anywhere in a hospital.

The new advice instead says the virus can “sometimes be spread by airborne transmission” and can be spread by both larger droplets and smaller aerosols released when people “cough, sneeze, sing, talk, or breathe.”

But while the virus can be airborne under some circumstances, it is not the primary way the virus spreads, the C.D.C. said.

The revisions arrived as President Trump received treatment at Walter Reed National Military Medical Center in Bethesda, Md., for what may be a severe case of Covid-19, the illness caused by the coronavirus. (Mr. Trump was to be discharged from the hospital on Monday evening.)

The administration is contending with a rising number of such infections among Mr. Trump’s inner circle. Kayleigh McEnany, the president’s chief spokeswoman, announced on Monday morning that she had tested positive for the coronavirus, the latest in a string of political figures heading into self-quarantine following what may have been a so-called superspreader event at the White House earlier this month.

That ceremony, a celebration of Judge Amy Coney Barrett’s nomination to the Supreme Court, involved close contact both indoors and outdoors by attendees who wore no masks.

Former Vice President Joseph R. Biden Jr., too, may have been exposed to the virus during the presidential debate with Mr. Trump. But he is continuing to campaign, his aides said, because he did not meet the C.D.C. requirement for close contact — less than six feet of distance from an infected person.

But in a press statement accompanying the new guidance, the C.D.C. said, “People are more likely to become infected the longer and closer they are to a person with Covid-19.”

Mr. Trump talked loudly and at length during the debate, which experts have said could have released 10 times as much virus as breathing alone.

At the time, C.D.C. officials said the document had been posted in error and had not yet been cleared through the agency’s rigorous scientific review.

In both documents, the agency emphasized the risk of infection in poorly ventilated indoor environments.

Under such circumstances, the amount of infectious smaller droplets and particles expelled by the people with Covid-19 “became concentrated enough to spread the virus to other people,” the agency said, even to those who arrived in a room shortly after an infected person left.

Some experts praised the softer emphasis on airborne transmission.

“This is consistent with what the epidemiological data has shown us — opportunistic and situational airborne events do occur, but close contact is really where it’s at,” said Saskia Popescu, a hospital epidemiologist at George Mason University in Fairfax, Va.

But on Monday, a group of aerosol scientists including Dr. Marr contended the opposite in a letter to the journal Science. “There is overwhelming evidence that inhalation represents a major transmission route,” the researchers wrote.

The new guidance takes on urgent importance as cooling temperatures send people back indoors, where risk of the virus spreading by air is highest.

The agency’s advice also guides managers of schools, offices, hospitals and other public buildings in preparing for the winter by improving their ventilation systems and taking other precautions.

Scientists disagree on the precise definitions of droplets and aerosols, and on their relative contribution to the spread of the virus. But they generally agree that droplets are heavier and fall more quickly to the ground, whereas lighter aerosols can linger in the air indoors.

Before it was taken down on Sept. 21, the previous version of the C.D.C. guidance was the agency’s first unambiguous acknowledgment that the virus spread by air. Before that, the agency had emphasized hand hygiene, wearing face coverings and maintaining six feet of distance as the primary ways for people to protect themselves.

Those things all do matter, experts said, but it has been clear for months that at least in poorly ventilated indoor spaces, the virus can travel farther than six feet.

In August, for example, scientists reported that they had successfully isolated live virus from aerosols collected at distances of seven and 16 feet from an infected patient in a hospital.

Some scientists have also said that spread by aerosols is the most likely explanation for superspreader events, such as a cluster of cases following a choir practice in Washington State — and perhaps the White House celebration for Judge Barrett.

Aerosol transmission indoors may also explain the surge in Southern states this summer as people stayed in air-conditioned indoor spaces.

But the C.D.C. had not openly acknowledged the risks of coronavirus floating in particles adrift in indoor air, beyond indirect nods to the importance of ventilation in schools and businesses.

After public outcry, the W.H.O. agreed to review the new evidence and updated its guidance a few days later to reflect that the virus may linger in aerosols in crowded indoor spaces. But the C.D.C. did not directly acknowledge this change, even though parts of its website have advised schools and businesses to upgrade their ventilation systems.

The reversal on Sept. 21 to language that emphasized only droplets as transmission vectors led some public health experts to speculate that the agency had been ordered to take down the acknowledgment of floating aerosols.

The agency had reversed its position on another recommendation, one that said close contacts of infected people did not need to be tested if they had no symptoms. After The New York Times reported that the language had been dictated by political appointees in the administration rather than by C.D.C. scientists, the agency reverted to more scientific phrasing and recommended that everyone who has been in contact with an infected person should get tested, regardless of symptoms.

Curfew ordered in Srinagar on August 4 and 5 on first anniversary of abrogation...