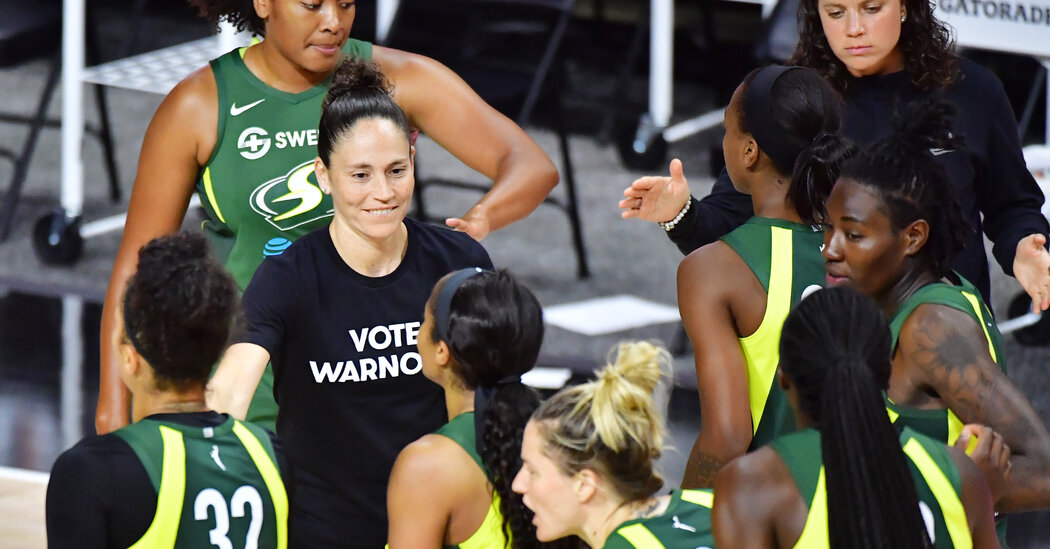 They will not say her name. Not now, after what these players have been through. It is important not to give her recognition.

Think of it as protest jujitsu.

The W.N.B.A. finals have begun. On Sunday, the Seattle Storm defeated the Las Vegas Aces, 104-91, to take a two-games-to-none lead in their best-of-five series. Game 3 is Tuesday night.

In its 24th year, the women’s league has some of the most incandescent players in basketball but still struggles for broad recognition and respect. In this strange season, which unfolded in a Florida arena without fans because of the coronavirus pandemic, the minimalist environment has provided a bright backdrop for the league’s evolving talent to shine.

The legacy of the 2020 season, however, will not only be about on-court action and a championship won. It will also be about the W.N.B.A.’s continued leadership in the battle for human rights.

In no way has this been clearer than in how its players have responded to brackish bullying from an unexpected source: the co-owner of the Atlanta Dream, Senator Kelly Loeffler of Georgia.

When they talk about her, they refuse to name her.

Think back to June, to the raw-edged days after the killing of George Floyd in police custody in Minneapolis. As the nation reeled and launched into self-examination, the W.N.B.A. was among the first professional leagues to say its upcoming season would be devoted to pushing for social justice and promoting the Black Lives Matter movement.

That was not a surprise. Nearly 70 percent of the league’s players are Black and a significant number of its stars are lesbian. They are women who know all too well the full brunt of discrimination. That is why they have been leaders in the justice fight for so long.

Nor was it a surprise when they faced blowback.

The surprise was that the blowback came from within. To be specific, from one of the league’s most influential voices, Loeffler, a Republican who is running to keep her seat in the Nov. 3 election.

Loeffler reacted by publicly scoffing at the league’s pledge to double down on social justice support in 2020. She scorned the decision to cover player jerseys with the slogan “Say Her Name,” meant to call attention to the deaths of Black women like Breonna Taylor at the hands of the police.

In a letter to the W.N.B.A.’s commissioner, Loeffler wrote, “I adamantly oppose the Black Lives Matter political movement,” before listing a series of inaccurate claims, including that it “promoted violence and destruction across the country.”

There was a method to Loeffler’s obstinate stance. She has been engaged in a hard-nosed battle for Republican voters in a conservative state. To gild her bona fides with the far right in her party, she cribbed from a well-worn playbook used by President Trump: To show toughness, verbally attack Black athletes and draw them into a fight.

Even if it meant attacking everything that the players on her team — along with the entire league — have stood for.

But things have not turned out as she planned. With each of the league’s dozen teams sequestered on a sports training campus near Tampa Bay, the players huddled together. They knew the W.N.B.A. commissioner’s office had denounced Loeffler’s views. They also understood that their cash-compromised league was not exactly in a prime position to demand she put her 49 percent stake in the Dream up for sale. Amid a pandemic and widespread economic calamity, who would be the buyer?

So the players strategized, and took her on in their typically thoughtful manner.

“We realized, ‘Oh, she wants us to get mad,’” said Sue Bird, Seattle’s veteran guard, remembering the moment as we spoke last week by telephone. “She wants us to try and kick her out. That would give her more attention. This is what she wants.”

“We had to find a better way.”

Instead of meeting force with force, providing fodder that would only fuel Loeffler’s campaign, the players decided to work around her.

Their first move was both decisive and quietly aggressive: In interviews, public pronouncements and on social media, they decided to stop saying the Atlanta co-owner’s name.

They refused to give her the dignity.

“Words are things,” said Nneka Ogwumike, the Los Angeles Sparks forward who is president of the league’s players’ association, as she walked me through the strategy. “Words have power. And to give energy to a name I think is very meaningful. So, we stopped saying that name.”

The next move was more to the point.

It began with leaguewide video calls featuring a cast of advisers including Michelle Obama and Stacey Abrams, who in her bid to become governor of Georgia in 2018 nearly became the first Black woman to be elected governor anywhere in the United States. The discussions centered on politics and power.

The players began vetting Loeffler’s political opponents in the upcoming election, looking for a way to insert themselves into a race that could end up altering the balance of congressional power. They homed in on one candidate: The Rev. Dr. Raphael Warnock, a Democrat and a pastor of Atlanta’s Ebenezer Baptist Church, where the Rev. Dr. Martin Luther King Jr. was co-pastor.

Once Warnock addressed the players over Zoom, there was no doubt. “It was clear to us immediately,” Bird told me. “He stands for everything that we stand for. You could literally go down the line of all the things we care about, and we were aligned with him. It was like, ‘Wow, we want this guy in the Senate. This is the candidate that we want in the Senate.’ ”

Within days, nearly everyone in the league began showing up for their nationally televised games wearing black T-shirts emblazoned with two words: Vote Warnock.

That kind of mass support for a single candidate opened a new chapter in the annals of athlete protests.

“It’s unprecedented,” said Amira Rose Davis, an assistant professor at Pennsylvania State University who specializes in race, sports and gender. Davis noted the many examples of individual athletes supporting politicians. That’s been the tradition in sports.

“But this is different,” she said. “The coordination. The strategic part. The specificity, taking the time to meet a candidate and then to back that candidate as a group. That has never happened before.”

After the player push, the Warnock campaign said it experienced a significant boost in enthusiasm and financial support: A spokesman said $236,000 flowed to the campaign in the days after the T-shirt endorsement began. Though it is impossible to draw a direct correlation with the W.N.B.A.’s activism, at least one major poll shows Warnock surging ahead of Loeffler and the other candidates for the first time.

This Senate race is far from over. If no candidate gets a majority of votes, there will be a runoff in January with the top two vote-getters.

“If Warnock wins and the byproduct is that a certain someone is not in the Senate, then, hey, we’re all happy,” said Bird, refusing, of course, to say that certain someone’s name.

No matter how this season or the election turns out, women’s professional basketball has once again helped lead the way. This time by showing the best way to work around a bully.

The Unconventional Convention Season: A Conversation About the 2020 Election