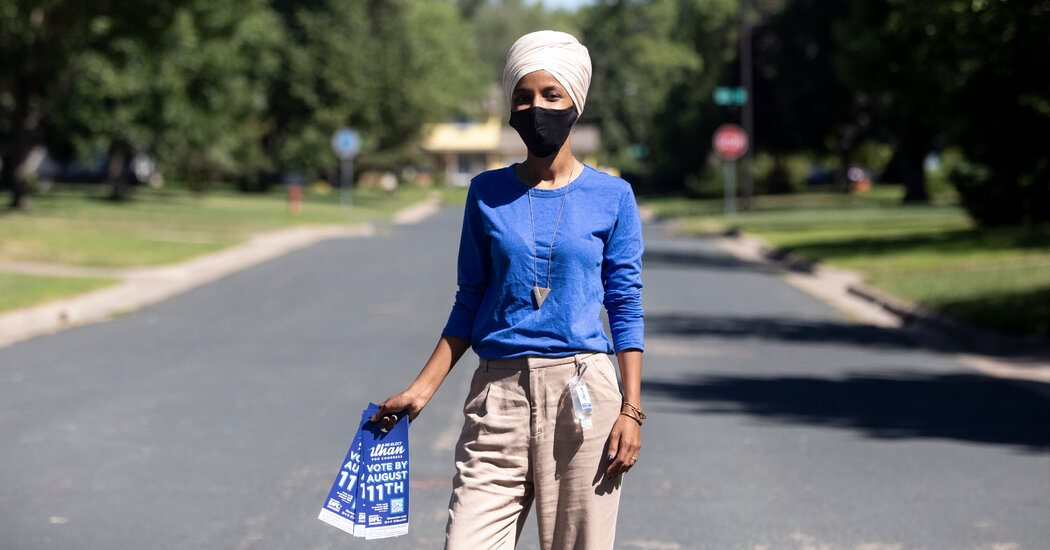 President Trump’s exhortation “Don’t be afraid of Covid” was denounced by Democrats and others who criticized him for taking a dismissive tone about a disease that has killed more than 200,000 Americans, sickened more than 7.4 million and upended daily life across the country.

“Don’t be afraid of Covid,” Mr. Trump wrote on Twitter as he announced his plan to leave Walter Reed National Military Medical Center in Bethesda, Md., where he was brought by helicopter on Friday after testing positive for the coronavirus. “Don’t let it dominate your life.”

His statement quickly resonated in the political world, with some Democrats denouncing it as cavalier, saying it implicitly suggested that those who died after contracting the virus were weak. And several warned that minimizing the dangers posed by a virus that is spreading across the country — and the highest levels of government — sent a dangerous message at a moment health officials are pleading with the public to take precautions, wear masks and practice social distancing.

“‘Don’t be afraid of Covid’ is an evil thing to say to those of us who lost our loved ones to Covid 19,” Representative Ilhan Omar, a Democratic congresswoman from Minnesota whose father died from complications of Covid-19, wrote on Twitter. “This man is unfit to be President, he lacks the compassion and humanity it takes to lead our country.”

Carlos del Rio, an infectious disease expert at Emory University in Atlanta, responded to the president’s post with one of his own: “Are you telling the relatives of 210,000 Americans who have died of #COVID19 not to be afraid? Please tell everyone the truth once and for all, this is serious & #WearAMask You didn’t and got infected.”

Julián Castro, a former secretary of the Department of Housing and Urban Development, wrote: “More than 200,000 American lives have been lost to Covid-19. The president himself and countless staff have been infected. Yet, nine months into the pandemic, the president’s advice is ‘don’t be afraid of Covid.’”

Several Republicans embraced Mr. Trump’s dismissive message. Senator Kelly Loeffler, a Georgia Republican, tweeted “COVID stood NO chance against @realDonaldTrump” and shared a crudely doctored video of the president in a wresting match with the virus. And Representative Matt Gaetz of Florida posted: “President Trump won’t have to recover from COVID. COVID will have to recover from President Trump.”

Many Democrats noted that Mr. Trump has access to better health care than most Americans. Senator Sherrod Brown, an Ohio Democrat, reacted to the president’s tweet by posting “tell that to all the Americans who – unlike you – DON’T have access to the best healthcare in the world, funded entirely by taxpayers.”

Senator Chris Murphy of Connecticut went further, noting reports showing that Mr. Trump had paid little or no federal income tax in recent years. “Don’t be afraid, says the guy with a team of a dozen doctors, access to experimental treatments that no one else gets, a four room hospital suite, who lives in a house with top doctors on site 24/7,” he wrote on Twitter. “All of which is provided to him for free because he refuses to pay taxes.”

“In all seriousness, the President’s incompetence has already gotten 200,000 killed,” he added. “The consequences of this tweet will probably kill a couple thousand more. Just bone chilling.”

The doctor overseeing President Trump’s care, Dr. Sean P. Conley, was asked about the president’s tweet at a news conference on Monday afternoon at Walter Reed. “I’m not going to get into what the president says,” he said at the briefing, where he had also noted that the president was not “out of the woods yet” in his fight against Covid-19.

Britain Is Getting Ready for Its Space Race

Heavy rainfall, thunderstorm likely in Gilgit-Baltistan, southern and eastern parts of India in next...

What It Means to Be a Gen Z Beauty Brand Today