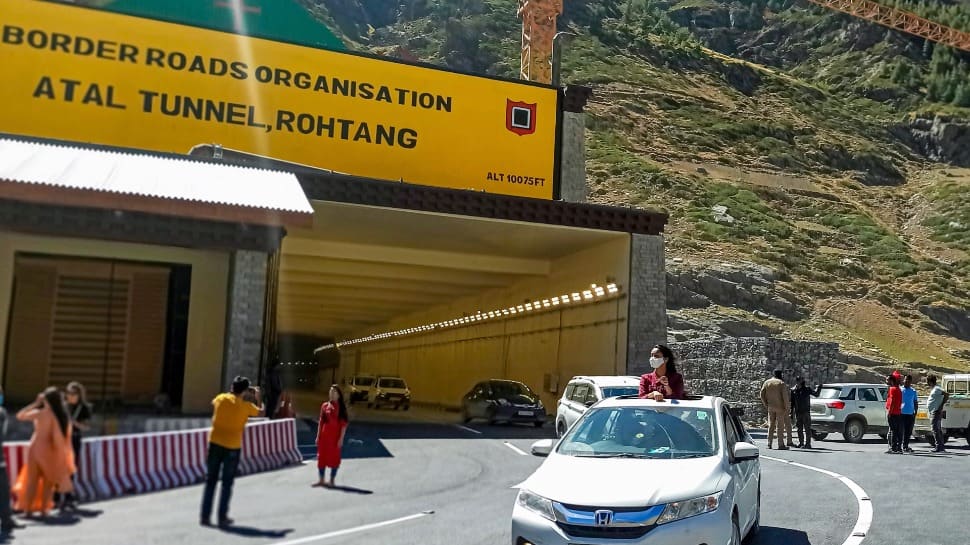 Manali: Motorists are tunnelling their way to accidents by combining selfies with reckless driving while zooming through the 9.02-km long horseshoe-shaped Atal Tunnel, the world`s longest motorable tunnel, in Himachal Pradesh`s Kullu district.

A day after Prime Minister Narendra Modi inaugurated the tunnel, beneath the majestic Rohtang Pass on October 3, three accidents were reported with the motorists driving recklessly.

The Border Roads Organisation (BRO), a wing of the Defence Ministry that excavated the tunnel at an altitude of 3,000 m or 10,000 feet with sheer hard work and determination in a decade, on Monday blamed the local authorities for not deploying the police to monitor the movement of motorists.

However, with the raising of serious objections by the BRO, the state government has now deployed the police after 48 hours.

BRO Chief Engineer KP Purushothaman told IANS that an official communication to provide forces to regulate the movement of the traffic was sent to the Chief Minister`s Office on July 3 and to the local administration on October 3.

The letter, accessed by IANS and addressed to the Advisor-cum-Principal Private Secretary to the Chief Minister, clearly specified the requirement of police.

Also, the BRO asked the civil authorities to station fire brigade personnel at the tunnel.

“Three accidents were reported in a single day on October 4. The cause of the accidents was largely reckless driving,” he said.

He said the CCTVs recorded that a few motorists stopped their vehicles midway while crossing the tunnel to take selfies.

“No one is allowed to stop the vehicle midway and no overtaking is allowed despite the tunnel being double-lane, Purushothaman added.

The BRO in another missive to the local authorities on October 3, the day the tunnel was to be inaugurated, reminded them to deploy security and fire engines at the tunnel.

To prevent a “lone-wolf” attack, the BRO has not allowed the movement of vehicles through the tunnel carrying inflammable items such as petroleum, oil, lubricants and liquefied petroleum cylinders and explosives.

During the closure period, traffic will not be allowed beyond Dhundi, near here, from the south portal and ahead of the Chandra bridge at the north portal to avoid congestion near both the tunnel ends.

The 9.2 km-long horseshoe-shaped single-tube, two-lane tunnel has been constructed under the 3,978 metre Rohtang Pass in the Pir Panjal range, some 30 km from here.

The Atal Tunnel, a dream of former Prime Minister Atal Bihari Vajpayee and named after him posthumously, has shortened the distance between Manali and Keylong, the headquarters of Lahaul-Spiti, by 46 km, reducing the travel time by nearly three hours. It has also ensured all-weather connectivity.

People in the landlocked Lahaul Valley, who are largely Buddhist and earn their livelihood by growing a single crop of potatoes, peas and exotic vegetables, believe the Atal Tunnel will bring economic prosperity to the otherwise snow-bound, inhospitable region.

Harassment Against Gay and Trans People on TikTok

Explained: Why prices of tomato, onion and other vegetables are soaring in Delhi