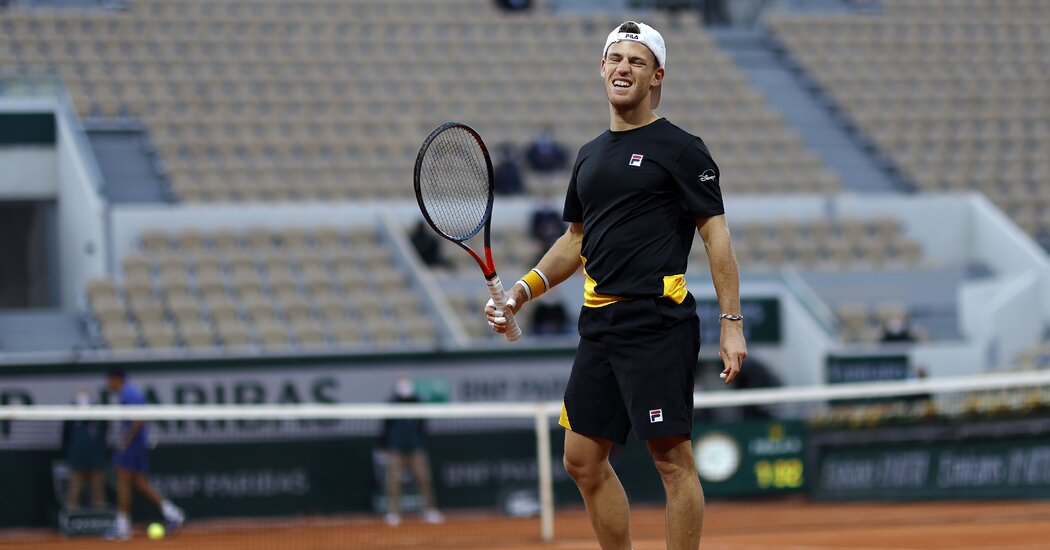 Modern men’s professional tennis does not really do small.

The last Grand Slam men’s singles champion who was not at least six feet tall was Gaston Gaudio of Argentina, the 2004 French Open champion. During the past decade, as tennis has become ever more physical, just two men under six feet have even made a Grand Slam final.

And yet, the most dangerous man in Paris right now besides Rafael Nadal and Novak Djokovic may be a steady baseliner from Argentina named Diego Schwartzman, whose listed height of 5 feet 7 inches could be one of the more generous measurements in professional sports.

“Very solid,” Schwartzman said on Sunday of his recent play after he disposed of Lorenzo Sonego of Italy in straight sets in the fourth round.

That may be one of the biggest understatements since professional tennis resumed this summer. Schwartzman, who has never made a Grand Slam semifinal, has won eight of his past nine matches during the abbreviated season on Europe’s clay courts, his favorite surface, especially this year.

In Rome, he pulled off one of the rarest achievements in the game in the past 15 years — a win against Nadal on red clay — before losing to Djokovic, the world No. 1, in the Italian Open final. In Paris, he has won five of 15 sets by a score of either 6-0 or 6-1. He dispatched with Sonego in just one hour, 58 minutes.

Sonego is officially just eight inches taller than Schwartzman, but in reality, the difference is closer to a foot. (I am 5-foot-8. I have stood eye-to-eye with Schwartzman. He is not 5-foot-7.)

It is possible that Schwartzman’s parents knew very early that he might excel in sports despite his height — they named him for Diego Maradona (5 feet 5 inches), another undersized sports hero from their country. His nickname is El Peque — a slang term in Spanish that roughly means “shorty” in English.

Schwartzman, 28, faces his good friend, Dominic Thiem, the recently crowned United States Open champion and one of the best clay court players himself, in a quarterfinal on Tuesday.

Thiem, who has made it clear he has been running on fumes since his marathon U.S. Open final, was stretched to five sets on Sunday in the fourth round by the French qualifier Hugo Gaston, ranked No. 239. Gaston, at 5 feet 8 inches — another relatively diminutive player — delivered a perfect game plan for Schwartzman to follow, frustrating Thiem with his display of spins, drop shots and unrelenting defense.

When it was over, Thiem saw Schwartzman cooling down from his match on an exercise bike. Knowing he may need all of the help he can get, Thiem wandered over and gave Schwartzman a pretend whack on the leg.

“Obviously, playing like how I’m playing the last two weeks on clay, I have chances,” Schwartzman said.

Indeed he does. He knows the circumstances — the schedule, the weather and a switch to what players say is a heavier ball — have aligned to give him perhaps the best chance he will ever have to make a Grand Slam final.

The French Open usually takes place in late May and early June, but organizers moved it to this early fall time slot because of the coronavirus pandemic, which largely shut down sports in the spring.

In Rome last month, and in Paris the past 10 days, temperatures have been cool, mostly in the mid-50s.

The cooler temperatures have had a significant effect on the behavior of the tennis ball, which becomes less lively in colder weather. Also, the tournament organizers switched their ball sponsorship to Wilson from Babolat this year, and players say the new ball is heavier than the old one.

Those factors have combined to remove the most powerful arrow from the quiver of anyone who relies heavily on blasting the ball through the court, and helps a relentless and quick defender like Schwartzman, who limits his errors and avoids giving away free points.

“This is tough on the big hitters,” said Martina Navratilova, the 18-time Grand Slam champion. “If you are fast and you can run around and go get the ball, you have an advantage. Someone like Nadal, he gets hurt.”

For a small player like Schwartzman, a deader ball is a blessing, because it rarely bounces out of his strike zone, and with an extra split second to tee up his shots, he can be incredibly dangerous when his opponents are serving.

One of the game’s top returners of serve of late, Schwartzman punished Sonego on Sunday on his second serve, which is becoming a habit. Sonego won just nine points, or 26 percent, on his second serve. As opponents prepare to serve that safer, slower, second ball, they know there is a decent chance that Schwartzman is going to try to jump on it and send it screaming toward the baseline. Norbert Gombos (6 feet 5 inches) of Slovakia, Schwartzman’s third round victim, has been the only Schwartzman opponent in Paris to win more than 40 percent of points on his second serve.

Schwartzman has won more than $8 million on tour, but he has never cracked the top 10 and has just three ATP Tour titles in his career. But his ranking has steadily climbed the past four years, far higher than most would have given him a chance in an era when the rising elite of the sport appear to be taller every year.

“You never know when your ceiling is going to be there, and you don’t know if you’re going to reach another quarterfinals or reach another final in a big tournament,” Schwartzman said on Sunday. “These tournaments are really nice. They give me a lot of confidence because every year I can improve, I can do a few more things better.”

Your Trusty Maps App Can Help You Navigate the Pandemic