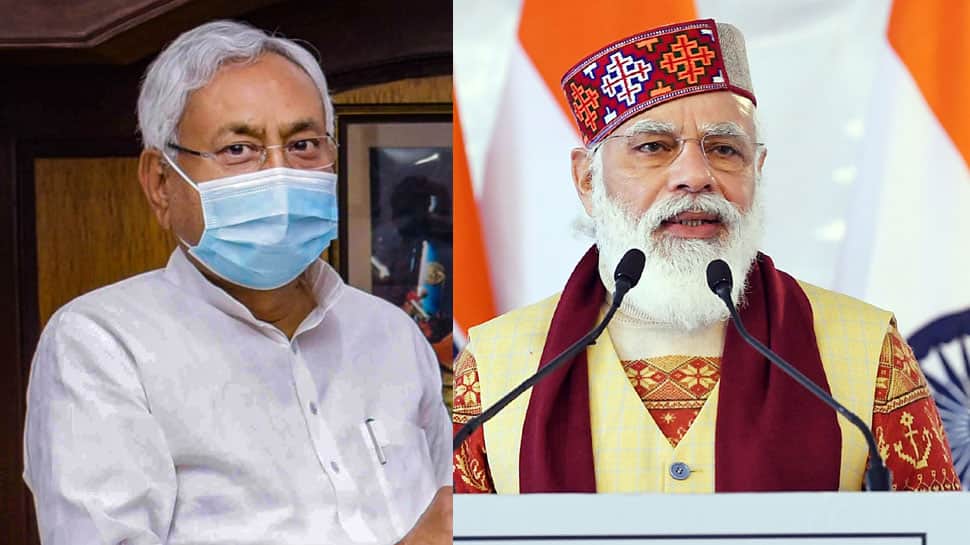 Ahead of the upcoming Bihar assembly election 2020, the Bharatiya Janata Party (BJP) and the Janata Dal (United) on Tuesday announced their seat-sharing deal. The official announcement on the coalition, seats and candidates was made by Bihar Chief Minister Nitish Kumar in capital Patna.

Earlier today, the National Democratic Alliance (NDA) met at the Chief Minister`s official residence in Patna. Devendra Fadnavis, Sushil Modi, Sanjay Jaiswal, and Bhupendra Yadav were present at the meeting. The BJP has rebuffed Chirag Paswan’s LJP and said that its alliance with Nitish Kumar’s JD(U) in Bihar is “unbreakable”.

The JD(U) will contest on 122 seats while the BJP will fight the election on the remaining 121 seats. The JD(U) with its give seven of its seats to Jitan Ram Majhi’s Hindustan Awam Morcha (HAM) and BJP with share and give seats to the Vikassheel Insaan Party (VIP) of Mukesh Nishad.

“JD(U) has been allotted 122 seats. Under that quota, we are giving 7 seats to HAM. BJP has 121 seats. Talks are underway, BJP will allot seats to Vikassheel Insaan Party under their quota,” said CM Nitish Kumar.

After walking out of the NDA in Bihar, Lok Janshakti Party (LJP) president Chirag Paswan on Monday targeted Chief Minister Nitish Kumar and appealed to people against voting for Kumar’s JD(U). Chirag Paswan claimed that an alliance of his party and the BJP will come to power in the state after the Assembly polls.

In an open letter, Chirag Paswan told the voters of Bihar that a vote for the Janata Dal (United) will force the migration of their children tomorrow as he sought their support for his party candidates in the three-phase poll starting October 28.

Earlier on Sunday, the LJP decided to put up its candidates against the JD(U) citing “ideological differences” with the party to assert that it will not accept Kumar’s leadership of the National Democratic Alliance (NDA).

Paswan said, “This is the most decisive moment in the history of the state of Bihar. It is a question of life and death of the 12 crore people of the state and we have no time to lose…. The road ahead is not easy for the LJP but we will fight and win too,” adding all LJP MLAs will work under the leadership of Prime Minister Narendra Modi.

Notably, the Bharatiya Janata Party (BJP) is the principal member of the NDA and it has already announced Kumar as the leader of the bloc in the state.

The 37-year-old leader also made a reference to his ailing father, Union minister Ram Vilas Paswan, who has undergone heart surgery at a private hospital in Delhi and is expected to remain hospitalised for some time.

Talking about Saying “Bihar first, Bihari first” vision document, Paswan said his father would be proud that his son has stuck to the issue he had raised through it.

On Sunday, the LJP announced that it will go solo in the upcoming Assembly election in Bihar. Chirag Paswan made the statement after a meeting of its senior party leaders in Delhi. In response to a question on whether the LJP has decided to join hands with the BJP, he said, “Let me enjoy the moment.”

Talking to media after the meeting of LJP’s central parliamentary board at his residence in Delhi, Chirag said, “I will not speak more but we will win the battle.”

Elections to the 243-seat Bihar assembly will be held in three phases–October 28, November 3, and 7 and the counting of votes will take place on November 10.

In the 2015 assembly polls, JD-U, RJD, and Congress had fought the elections together under the Mahagathbandhan banner. On the other hand, the BJP-led NDA had fought the elections with Lok Janshakti Party (LJP) and other allies. RJD with 80 seats had emerged as the single largest party in the elections, followed by JD-U (71), and BJP (53). However, BJP got the largest vote share (24.42 per cent), followed by RJD with 18.35 per cent and JD-U (16.83 per cent).Differences later emerged between the RJD and JD-U in 2017, resulting in Chief Minister Nitish Kumar returning to the NDA.

The Tempting of Neil Gorsuch

How China Brought Nearly 200 Million Students Back to School