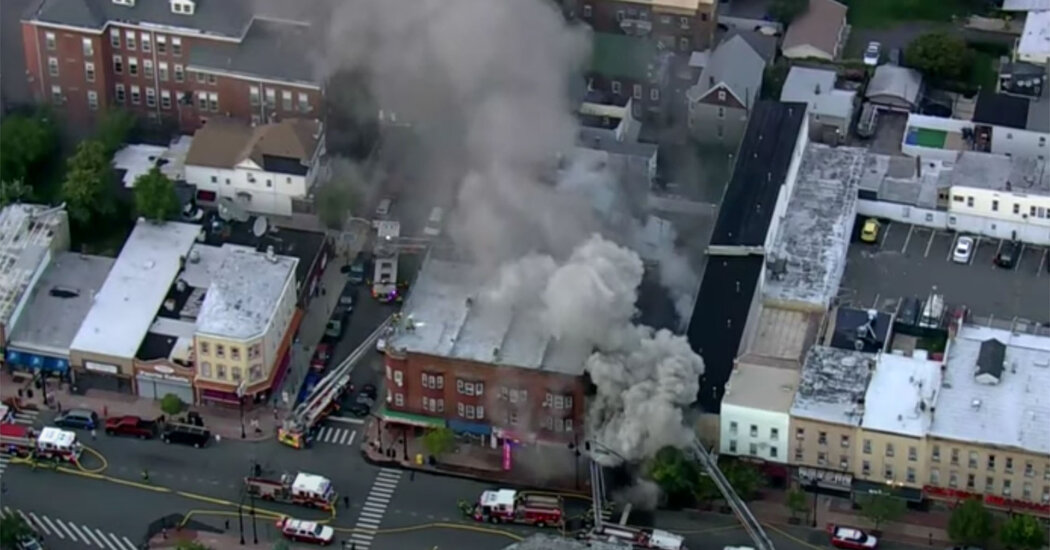 Two girls were killed on Monday evening when a fast-moving fire tore through a building in downtown Elizabeth, N.J., the mayor said.

The fire also left a 28-year-old man and a woman who officials “strongly believe” is the dead girls’ mother in critical condition, the mayor, Chris Bollwage said.

Mr. Bollwage said officials did not have precise ages for the girls, but he described one as 7 to 9 years old and the other as “preteen.”

The city’s Fire Department received its first call about the blaze, in a mixed-use building on Elizabeth Avenue near Jacques Street, at around 6 p.m., Mr. Bollwage said. The fire quickly went to five alarms, and firefighters from 10 neighboring towns responded to battle it, he said.

The building’s ground floor housed a dollar store, with a furniture store at the front of the second floor and apartments behind that, Mr. Bollwage said. The fire destroyed the building and prompted officials to temporarily relocate 21 people, including some from nearby buildings, he added.

Shortly after the fire started, several police officers who were on patrol in the area rushed to the scene and tried to rescue the girls and the woman from the building, but were prevented from doing so by metal bars on the windows, Mr. Bollwage said.

Firefighters were ultimately able to extricate them, he added. It was not clear how the man escaped from the building or what his relationship to the other fire victims was, the mayor said.

Ismael Qarizad was working at Crown Fried Chicken and Pizza on Elizabeth Avenue and saw that “fire was flowing,” he said in a phone interview late Monday night. He heard two booms and said the fire looked big, but went back inside before he could fully absorb the scene.

It was not immediately clear what caused the fire or where in the building it started, Mr. Bollwage said, noting that an investigation was continuing.

Novak Djokovic on Coronavirus, Vaccines and His Ill-Fated Adria Tour

Unicorn Floats and a Marriage Deflated

Free Advice, From Four Therapists’ Couches to Yours