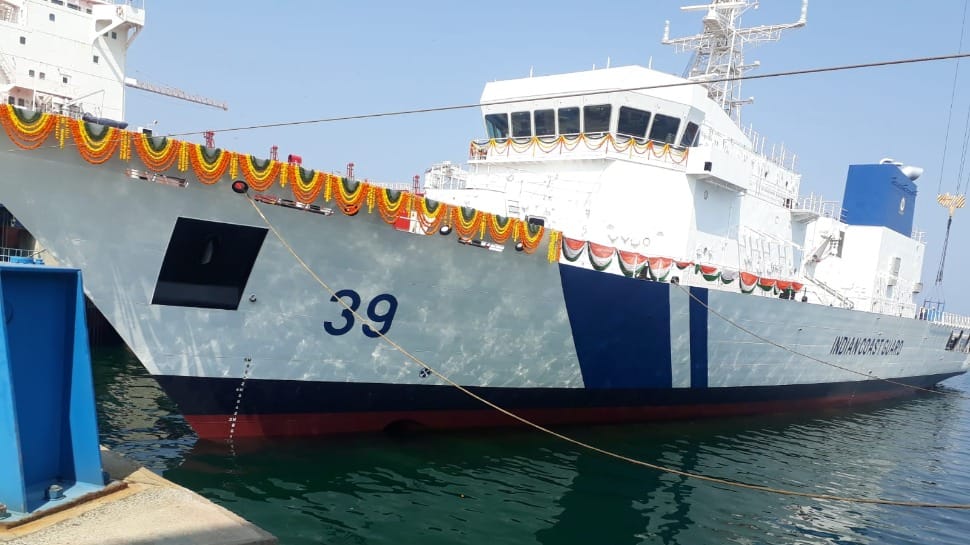 Chennai: The Indian Coast Guard launched a 98-meter Offshore Patrol vessel ‘Vigraha’ at a private shipyard in Kattupalli, north of Chennai, in the presence of Dr TV Somanathan, IAS, Secretary (Expenditure), Ministry of Finance. Director General Indian Coast Guard K Natarajan and Inspector General Region East S. Paramesh were also present with other dignitaries and officers. This is the last in the series of seven vessels that was designed and built exclusively for the Coast Guard by Larsen and Toubro Shipbuilding as a part of the ‘Make in India’ initiative.

The 98-m long ship has a displacement of 2100 tons, is capable of achieving a top speed of 26 knots and has an endurance of 5000 nautical miles and has the ability to stay at sea for 20 days without replenishment.

Vigraha, also known as (Yard-45007) is likely to be inducted into Indian Coast Guard in March 2021 after completion of extensive trials and testing of the on-board equipment and machinery. Once inducted, the vessel would serve the East Region, from Vishakapatnam, under the leadership of IG S.Paramesh in the Region East.

Launching of the vessel marks an important milestone, as the vessel touches the water for the first time.

In India, ships have historically been launched with a Puja ceremony that dedicates the ship to the almighty and blessings are sought for the ship and her crew. The ceremony involves a lady breaking a coconut on the bow of the vessel, along with Puja and festivities. As per Maritime traditions the ship was launched by Smt Hema Somanathan, Spouse of Dr TV Somanathan, the Chief guest.

The ship has been fitted with advanced navigation and communication equipment, sensors and machinery that are capable of operating in tropical climates.

The ship has been designed to carry integral Twin Engine Helicopter which will enhance its operational, surveillance, search and rescue capability. Armed with a 30mm 2A42 Naval Gun and two 12.7mm guns, the ship would be utilized for day and night surveillance, besides anti-terror, anti-smuggling operations in the Exclusive Economic Zone and for coastal security.

Despite the restriction and constraints faced amid the pandemic, the vessel is said to have been launched in a timely manner and is expected to be operational as per schedule.

The ship’s expected life span is more than 25 years and is meant to be manned by 102 crew, which includes 14 Officers, 88 Subordinate officers and Enrolled personnel.

New OPVs and other vessels being inducted into the Indian Coast Guard are meant to replace ageing ships (that served for over 25-30years) in the fleet.

At an earlier occasion, K Natarajan, Director General, Indian Coast Guard had said, “The Coast Guard began in 1977 with two vessels and five boats. We have made swift progress since then with the support of PSUs and Private shipyards and have over 146 surface platforms and 62 aircraft currently. The Interceptor boats are our workhorses and OPV form a strong backbone. We have a daily deployment of 50 ships and 10 aircraft for monitoring and securing our 7516 coastlines and Exclusive Economic Zone of over 2million sq kms.”

As a part of an expansion, modernization drive, Coast Guard is planning to boost assets to 200 vessels and 100 aircraft by 2025.

The Indian Coast Guard is the fourth largest in the world and stands larger than many Navies. The ICG also has bilateral and multilateral agreements with Sri Lanka, Bangladesh, Mauritius, Seychelles, Maldives etc.

Trump sent more than 2,000 invitations for an event on the White House lawn...