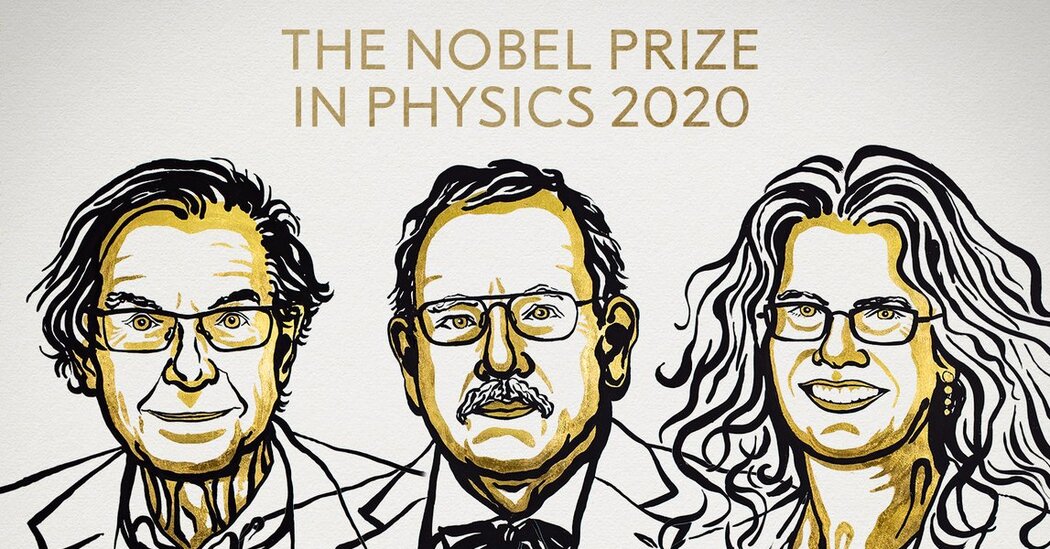 The Nobel Prize in Physics was awarded jointly to Roger Penrose, Reinhard Genzel and Andrea Ghez on Tuesday for their discoveries that have bettered understanding of the universe, including work on black holes.

Dr. Penrose was awarded half the prize “for the discovery that black hole formation is a robust prediction of the general theory of relativity,” the committee said.

The second half was split between Dr. Genzel and Dr. Ghez “for the discovery of a supermassive compact object at the center of our galaxy,” the committee said.

The Nobel Assembly announced the prize at the Royal Swedish Academy of Sciences in Stockholm.

Who are the winners?

Dr. Penrose, a Briton who is a professor at the University of Oxford, England, used “ingenious mathematical methods,” the academy said, to prove that black holes were a direct consequence of Albert Einstein’s general theory of relativity, even though Einstein himself did not believe that they existed.

Dr. Genzel, who was born in Germany, and Dr. Ghez, who was born in New York, lead a group of astronomers that focused on a region called Sagittarius A* at the center of our galaxy. By using the world’s largest telescopes, the academy said, the scientists had developed methods to see through the huge clouds of interstellar gas and dust to the center of the Milky Way.

Who else won a Nobel Prize this year?

Harvey J. Alter, Michael Houghton and Charles M. Rice on Monday received the prize for their discovery of the hepatitis C virus. The Nobel committee said the three scientists had “made possible blood tests and new medicines that have saved millions of lives.”

When will the other Nobel Prizes be announced?

Mulan, a Most Adaptable Heroine: There’s a Version for Every Era

In Rare Surge of Online Unity, Iranians Call for Halt to Executions

I’m the Police Chief in Portland. Violence Isn’t the Answer.