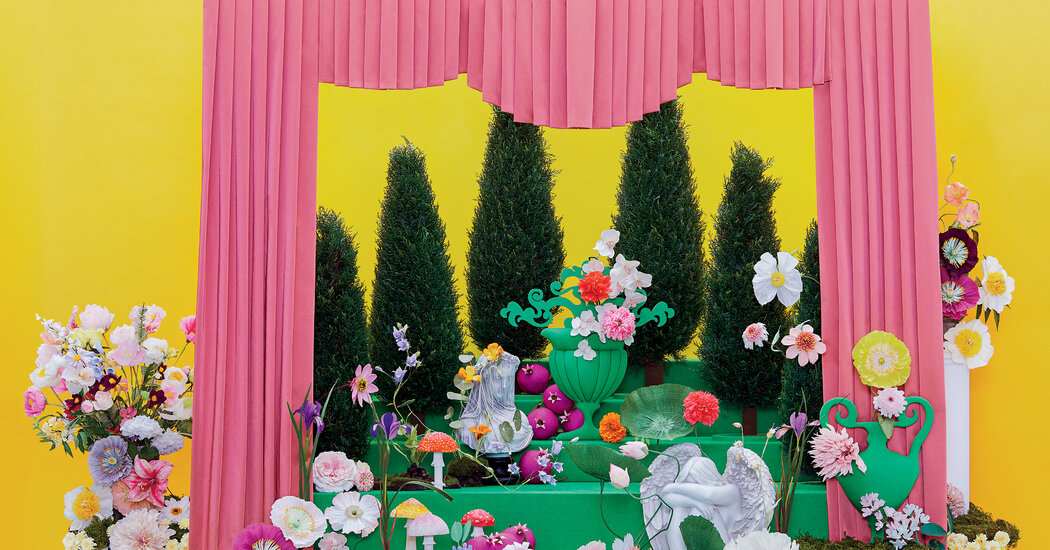 IN EARLY REGENCY-ERA England, neo-Classicism defined design: Walls were painted the pale hues of a summer morning. Greek motifs abounded. But such subtlety was too tame for the Victorians who followed, who preferred resplendent fakery: papier-mâché molded into heavy-looking armoires, giltwood chairs carved to resemble bamboo, lace crocheted to mimic snowflakes.

But perhaps what they prized above all else were artificial flowers. By the end of the 19th century, they covered every surface imaginable. Silk violets, peonies and bluebells were sewn onto gowns and ladies’ hats; vases overflowed with pink cabbage roses and spiky orange fritillaria made from cotton and wire. The flowers used for apparel were made in vast workshops where men wielded mallets and cutting tools to stamp out the petals from yards of silk before handing them off to poorly paid women, who shaped them into blossoms. By the 1880s, flower-making had become a popular occupation in London; one famous workshop was John Groom’s Flower Girls Mission in Clerkenwell, a Dickensian workshop-cum-social-welfare agency staffed by scores of blind and disabled women. Meanwhile, middle- and upper-class wives — not allowed to work yet expected to keep busy — maintained elaborate craft kits from which they made paper nosegays.

In the wake of World War I and Modernism, however, fake flowers were rendered gauche; women discarded their blossom-embellished gowns for Coco Chanel’s easy drop-waisted shifts, and stilted arrangements of artificial blooms suddenly seemed a poor substitute for the newly affordable tulips and daffodils imported from Holland. Faux flowers were pushed even further to the outskirts of taste by the tacky plastic versions that emerged by the late 1950s.

IN RECENT YEARS, however, as paper has been increasingly embraced as an artistic medium representative of the era’s sense of impermanence, the artificial flower has been revived. The current crop of blooms acknowledge ancient techniques — the Chinese started making paper around A.D. 100 — but have taken those once-simple forms to extremes.

A new generation of makers, many of them women deliberately reimagining crafts once dismissed as the idle work of stay-at-home ladies, have begun exploring the possibilities of flora made from all kinds of paper. Like lace-making, crochet and embroidery, handmade flowers — from the ultrarealistic to the wildly fantastical — are simultaneously ephemeral and weighty; they carry on their petals both a rich chapter in the history of craft and an inherent critique of social politics.

For some, an obsession with paper flowers comes from the garden itself. The New York City artist Livia Cetti, 47, shapes tissue paper into spotted lilies, purple-black hollyhocks and sprays of clover under the name the Green Vase. She studied at the San Francisco Art Institute, working in flower shops along the way, and becoming a (live) floral stylist at Martha Stewart. Cetti sells her stems — made from a special crepe or tissue paper that she bleaches or dyes herself — at John Derian, the home décor shop in Manhattan’s East Village. The Berkeley, Calif., artist Anandamayi Arnold, 45, makes everything from pomegranates to irises (rhizome included) covered in richly hued crepe paper. Her decorative blooms also double as party favors: The hollow insides hold secret trinkets like friendship bracelets and stickers.

Then there’s Sourabh Gupta, 30, who grew up in northern India, and who constructs his microscopically detailed blooms — Queen Anne’s lace, lady’s slippers and hellebore anchored in distressed terra-cotta or stone pots — in his Brooklyn studio, using everyday materials: Petals are made from paper towels hand-painted with food dye, coffee and tea; stamens are made from kitchen sponges. Boulder, Colo.-based Stephanie Redlinger, 39, a former graphic designer who launched her paper botanical atelier, the Florasmith, in San Francisco in 2015, considers her flowers and the mushrooms she has perfected, made primarily from crepe paper embellished with materials like sand, “as botanical portrait or homage” — realistic but with an emphasis on each creation’s essential quirks, such as a poppy’s wrinkles. The paper artist Zoe Bradley, 47, whose studio is in Cowbridge, near Cardiff, Wales, takes a more abstract, performative approach to her flowers. She began her career at the fashion house Alexander McQueen, where she built wooden legs and fan-shaped corsets for one of the designer’s elaborate runway shows, and her psychedelic-meets-origami blossoms, which she creates from stiff metallic paper, have been displayed in the windows of London stores including Liberty and Harrods.

And then there’s Tiffanie Turner, based in Fairfax, Calif., who is widely acknowledged as the progenitor and doyenne of the new generation of paper-flower makers, teaching popular workshops on the subject. She shows her work in galleries and museums, like the De Young and the Eleanor Harwood Gallery in San Francisco and Winston Wächter Fine Art in Seattle. “I like it when people see the art form as more than mere decoration,” she says. The 50-year-old has been creating her greenery for nearly a decade, making oversize and exaggeratedly realistic dahlias and peonies; each can take well over 400 hours to finish. Over the past five years, she has explored the concept of wilt, intrigued by people’s proclivity for withered paper blooms despite their distaste for natural floral decay. Her pieces appear as if they’re browning and shriveling, losing symmetry and color. Last year, Turner also created a collapsed rose whose petals appear to have faded from pink to white; their placement, she says, “looks exactly like a vagina.”

We venerate flowers for their perfection, the precise array of petals as comforting as an architectural rendering — but it is their ephemerality that truly makes them priceless. “I’m trying to make you see that there is visual poetry in every stage, even the end, right before everything falls apart,” Turner says. “Maybe if we can be OK with that in a flower, we can be OK with it in ourselves.”

What Are the Plans for Reopening California Schools? Here’s What to Know