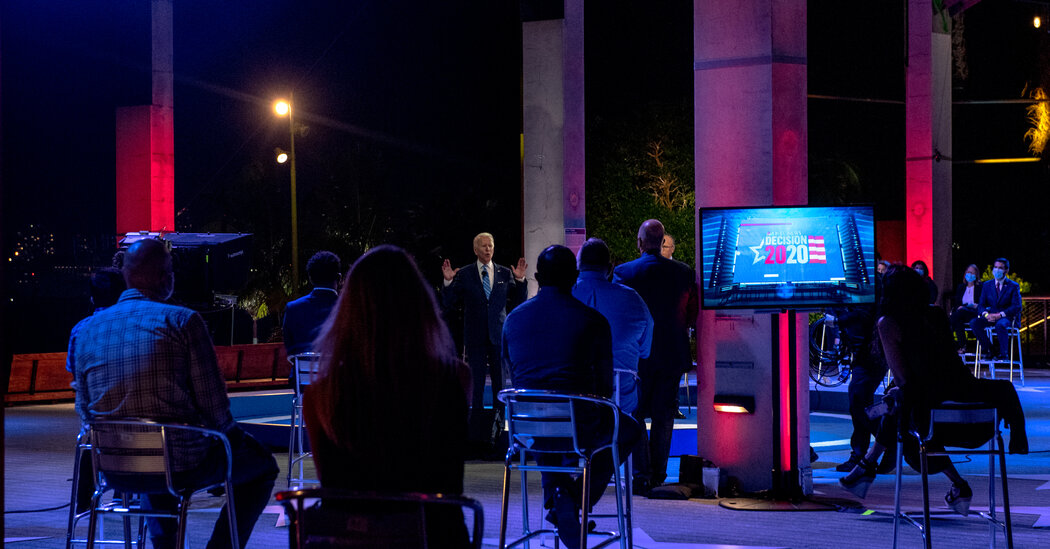 Mr. Trump, infected with the contagious and sometimes lethal coronavirus, returned by helicopter to the White House in a nationally televised hospital departure. Once back, he climbed to a White House balcony, removed the mask that reduces the risk to those around him and posed for pictures. Then he walked inside, where people wearing masks appeared to be standing.

“Now I’m better, and maybe I’m immune,” Mr. Trump declared in a video post from the balcony (physicians warn he is still at a precarious stage of recovery). Earlier in the day, Mr. Trump wrote on Twitter of the virus: “Don’t be afraid of Covid. Don’t let it dominate your life.”

The White House quickly cut Mr. Trump’s return into a triumphant video, replete with a salute to a departing military helicopter. The soundtrack for the video came from the instrumental part of a series called “Epic Male Songs,” according to Shazam, the music-identifying service. Minutes later, the all-caps email from the Trump campaign asking for money landed: “I’M BACK.”

The episode was the latest example of the president trying to bend the reality of the coronavirus to his wishes, an approach that has left him behind in the polls with over 210,000 Americans dead and a shrinking number of days until the election.

Mr. Biden, campaigning in Florida, held a socially distanced televised town hall event and urged a national mask mandate on federal property and respect for official health guidance. “Masks matter,” he said at one point. “Science matters,” he said at another.

He was incredulous at Mr. Trump’s refusal to consistently wear a mask and said those, like the president, who do not obey health guidelines are “responsible for what happens to them.”

Late Monday, Mr. Biden tweeted side-by-side videos, one of Mr. Trump taking off his mask at the White House and the other of Mr. Biden putting one on, with a text overlay: “Masks matter. They save lives.”

Mr. Biden will travel to Gettysburg, Pa., on Tuesday, and Mr. Trump, who health officials say should be isolated, has no publicly scheduled events.

Comedy via Zoom: It’s the Golden Age of Mugging

Hong Kong Security Law Sends a Chill Over the City