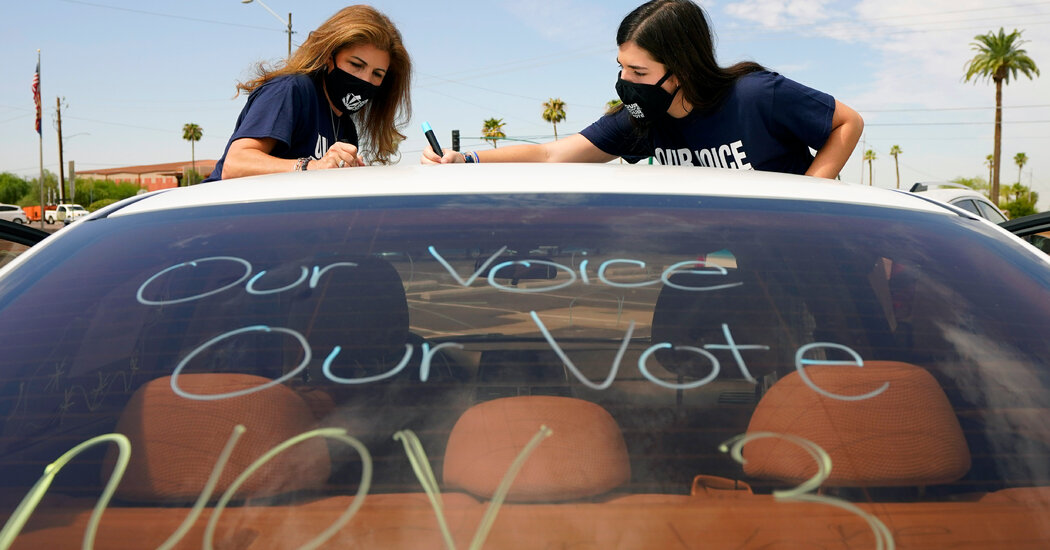 Mere hours before the midnight cutoff for Arizona voters to register for the November election, a federal district court judge extended the deadline by nearly three weeks, saying that thousands of people weren’t able to register because of the pandemic.

The question could go to the Supreme Court in the coming weeks.

Arizona is a battleground in the presidential election, with Joseph R. Biden Jr. threatening to flip a state Donald J. Trump won in 2016 and Senator Martha McSally, an appointee who filled John McCain’s seat, trailing in the polls to a Democratic challenger.

The lawsuit, brought by the Latino voter advocacy group Mi Familia Vota, argued that Gov. Doug Ducey’s stay-at-home order interrupted voter registration drives and that the pandemic stunted the group’s ability to sign people up to vote even after the order was lifted in May.

“Even in those high-traffic areas which remained open, such as grocery stores, it was almost impossible for voter registration staffers to register voters while maintaining the physical distancing of at least six feet required by the governor’s orders,” Zoe Salzman, a lawyer for the group, wrote in the lawsuit.

The Republican groups argued that registering to vote has “never been easier” because of online and telephonic registration.

But District Judge Steven Logan rejected that argument, writing that a large population in the state doesn’t have internet access, and that while registering to vote has never been easier for some, “others are not so fortunate.”

The new deadline may burden election officials, including Secretary of State Katie Hobbs, a Democrat, who opposed changing the deadline, but the people’s right to vote outweighed that burden, the judge wrote.

“Ballot access is an extremely important right, and it has been restricted during this unprecedented time,” he wrote.

Is It Street Wear or Is It Art?