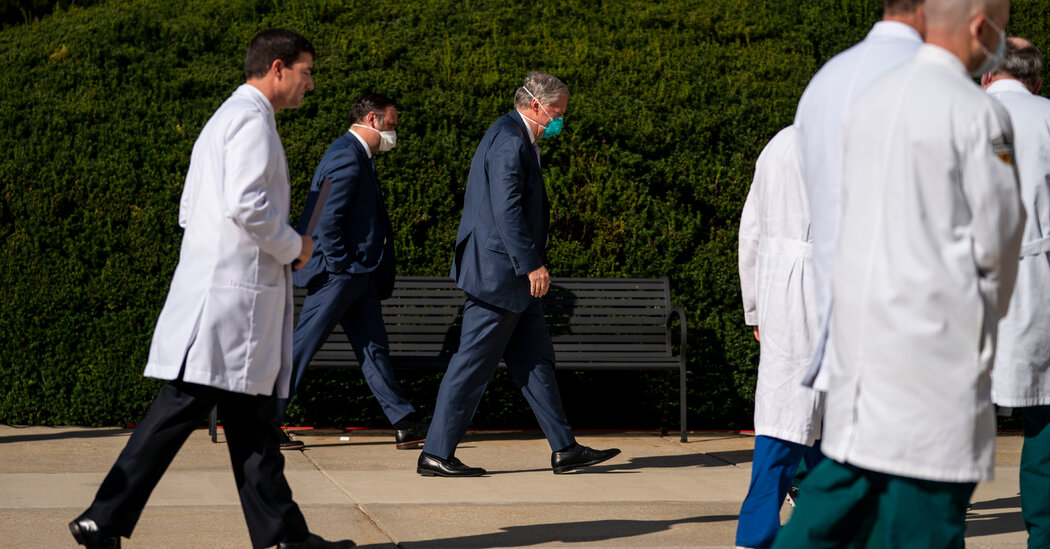 The White House physician, Dr. Sean P. Conley, said on Tuesday that President Trump was experiencing no symptoms of Covid-19 and doing “extremely well” on his first full day at home since a three-night stay in the hospital.

But outside doctors and medical experts in Covid-19 and lung disease said they were struggling to piece together an accurate picture of Mr. Trump’s health. Far from having vanquished Covid-19, the outside experts said, Mr. Trump is most likely still struggling with it, and possibly entering a pivotal phase in which he could take a turn for the worse.

Dr. Conley said on Monday that Mr. Trump had been prescribed dexamethasone, which some experts saw as a sign that the president could be dealing with pulmonary issues since it is recommended only for Covid-19 patients who have severe or critical forms of the disease.

“Does he have lung involvement? My guess is yes, because they did give him a lot of medications that they would only give to someone who did,” said Dr. Mangala Narasimhan, a pulmonologist and director of critical care services at Northwell Health in New York.

In a televised event on Monday that some of the president’s Republican allies tried to frame as a quick recovery from the virus, Mr. Trump was flown from Walter Reed National Military Medical Center to the White House. After leaving his helicopter, he crossed the lawn, walked up a set of stairs and removed his mask.

“As a pulmonologist, he did two things for me: He did a walk test, and he did a stair-climbing test,” said Dr. Talmadge E. King Jr., a specialist in pulmonary critical care and the dean of the UCSF School of Medicine. He added that lung doctors still rely on tests like these “to just get a picture of how the patient’s doing.”

He and others said that at the top of the stairs, Mr. Trump used his neck muscles to help him breathe — a classic sign that someone’s lungs are not taking in enough oxygen.

Dr. Ilan Schwartz, an infectious disease doctor and assistant professor at the University of Alberta, agreed. “As a physician, I would refrain from commenting on somebody whom I haven’t examined,” he said. “But in this case, the clinical signs are so obvious that it can be seen from a distance, even on a short two- or three-second clip.”

The Real Horror of ‘Jaws’ Isn’t the Shark