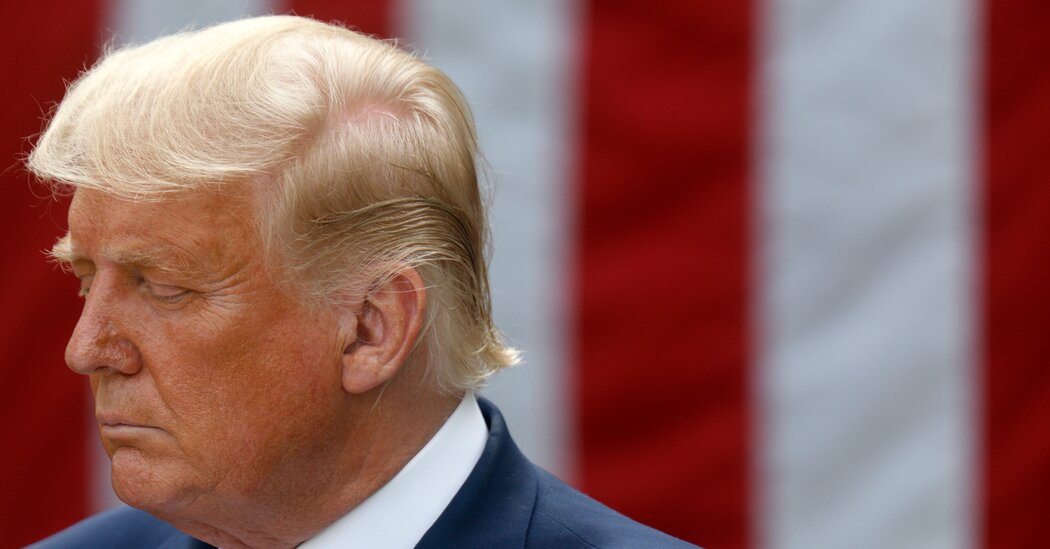 It sounds counterintuitive, but it’s true: Donald Trump is bad at electoral politics.

Yes, he is the president, which by itself would suggest the opposite. But to look at his conduct during the coronavirus pandemic is to see someone who doesn’t understand his own political interests and won’t listen to anyone who does.

The past week has been instructive in this regard. Last Tuesday, he faced off against Joe Biden in the first presidential debate. Trump, who trailed Biden in national polls and in most swing states, had one job: to bring wavering voters back into the fold. With a sufficiently competent performance, Trump could stop the bleeding and maybe even mount a small comeback. It wasn’t going to be easy, but it should have been simple — a straightforward turn that any incumbent president ought to have been able to make.

Of course, Trump blew it. He barked and ranted for 90 minutes, making the debate-that-was-not-actually-a-debate an alienating spectacle for most viewers. He demonstrated the truth of Democratic attacks on his temperament and ability at the same time that Biden dispelled the idea, pushed by the president and his allies, that Biden suffers from serious cognitive decline. The result was a rout.

The debate — an indoor, in-person affair — was also a showcase for Trump’s handling of the pandemic. Would he and his entourage take the situation seriously? Would they try to model good behavior for the public? The obvious answer was no. The venue, Case Western Reserve University, asked all attendees to wear masks. But Trump and his team refused, acting as if the virus didn’t actually exist. The president even mocked Biden for his dedication to wearing a mask. “I don’t wear face masks like him,” Trump said. “Every time you see him he’s got a mask. He could be speaking 200 feet away and he shows up with the biggest mask I’ve ever seen.”

Trump seems to believe that it shows strength to flout precautions and weakness to heed them. He seems to think the public wants this “strength” and will flock to him in support of his performance. Yet again, his vaunted political instincts failed him. When, in the wake of the debate, the White House announced that Trump and much of his senior staff had contracted the virus, the public response was something akin to “We told you so.” Sixty-three percent of Americans said the president had acted “irresponsibly” in “handling the risk of coronavirus infection to the people who have been around him most recently,” according to a CNN poll.

The most important issue right now for most voters is the pandemic, which has damaged the economy and radically transformed life for hundreds of millions of Americans, while killing more than 210,000 of us. They want solutions and assistance, not ostentatious displays of so-called masculine strength. They want the government, and the president, to be honest about the challenge. None of this is particularly difficult. Andrew Cuomo, the Democratic governor of New York, has had as much failure as success in handling the pandemic. His administration’s early decision to send thousands of discharged hospital patients back to nursing homes is arguably responsible for a significant portion of the state’s death toll. This might have doomed Cuomo with the public. But the power of the rallying effect is such that a serious performance of competence, as well as concrete actions to regain New Yorkers’ lost confidence, has been enough to keep him well above water politically.

The extent to which leaders across the country and around the world have been able to thrive despite high pandemic death tolls and a vicious economic downturn is a testament to how Trump could have forged a path to re-election had he treated the pandemic with any seriousness. Wearing a mask, pressing Congress for more aid, rejecting Covid-19 denialism and refraining from magical thinking — this is probably all it would have taken to spin a once-in-a-century crisis into political gold. But Trump refused, and now, if the polls are right and the forecasts are accurate, he’s just a few weeks away from what may well prove to be a landslide defeat.

Trump was the unexpected winner of the 2016 presidential election. That victory led many, including Trump himself, to believe he had some special sauce, some superpower that helped him defy political gravity. There’s no question he has some political skills. A lifelong showman, he’s good with a crowd, or at least certain kinds of crowds. He can distill an entire governing agenda into a few simple phrases. And he’s been able to build an emotional connection with a significant part of the American electorate.

But even with those assets, Trump doesn’t win the 2016 election without a huge amount of luck. Take away the WikiLeaks dump, take away the Comey letter, keep Anthony Weiner away from a computer, and there’s a very good chance that Hillary Clinton is elected president. Run the 2016 election a hundred times, exactly as it was, and Trump loses most of the time.

If the president had any appreciation for the role of luck and chance in his election, he would have governed in ways that maximized his advantages and cleared the path for an outright win. Instead, he embraced the myth of his political genius and brought himself, and his party, to the brink of political disaster. It took a fluke to put Trump into the White House, and if nothing changes, it will take another fluke to keep him there.

Through the collective efforts of all, we will stop breeding of dengue mosquitoes: Delhi...

Devil in the Details: How David Tennant Played a Serial Killer