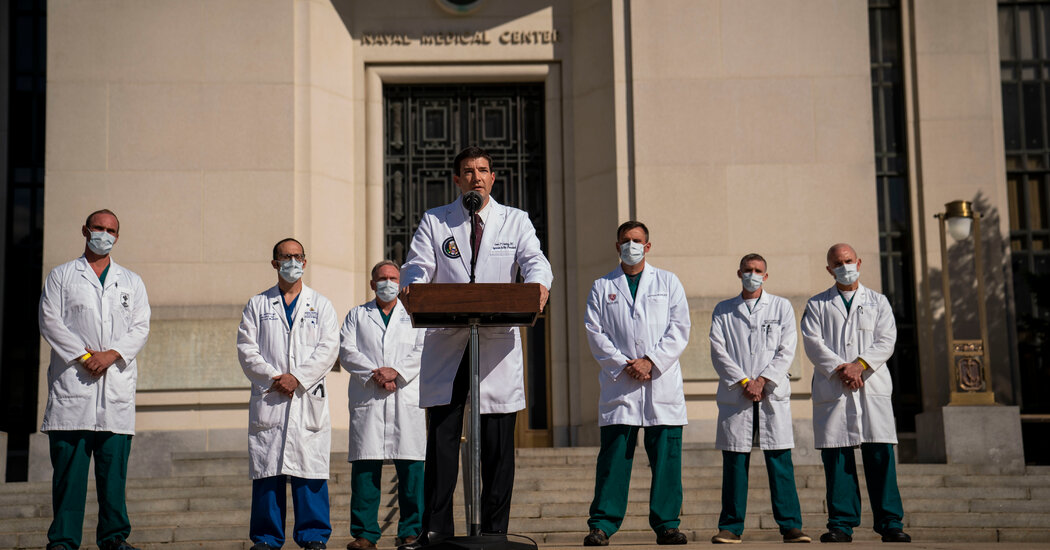 President Trump is reporting “no symptoms” of the coronavirus and doing “extremely well,” according to the White House physician, Dr. Sean P. Conley.

In a brief, three-sentence memo released by the White House, Dr. Conley — whose credibility has been questioned by some medical experts after he admitted to giving a deliberately rosy description of the president’s condition during a news briefing over the weekend — said that Mr. Trump’s team of physicians visited him in the residence this morning and that, after a “restful first night at home,” Mr. Trump “reports no symptoms.”

“Vital signs and physical exam remain stable,” he said, “with an ambulatory oxygen saturation level of 95 to 97 percent.”

“Over all he continues to do extremely well; I will provide updates as we know more,” Dr. Conley said.

Separately, Vice President Mike Pence’s physician also released an update on his condition, saying that Mr. Pence has “remained healthy, without any Covid-19 symptoms.” The physician, Dr. Jesse T. Schonau, said that Mr. Pence had been tested daily and had received negative results. He repeated his past assertion that Mr. Pence did not qualify as a “close contact” with anyone who has tested positive for the virus, according to guidelines from the Centers for Disease Control and Prevention.

“The Vice President is encouraged to go about his normal activities and does not need to quarantine,” Dr. Schonau wrote. Mr. Pence is in Salt Lake City ahead of Wednesday night’s vice-presidential debate and plans to attend campaign rallies in Arizona and Nevada the day after.

In a Tuesday memo that was shared on Twitter by a spokesman for Mr. Pence, the C.D.C. also said that the vice president had not been in close contact with anyone who had tested positive. It added that “from a public health standpoint, it is safe for the Vice President to participate” in the debate.

Fighting an Uphill Senate Re-election Battle, Doug Jones Does It His Way