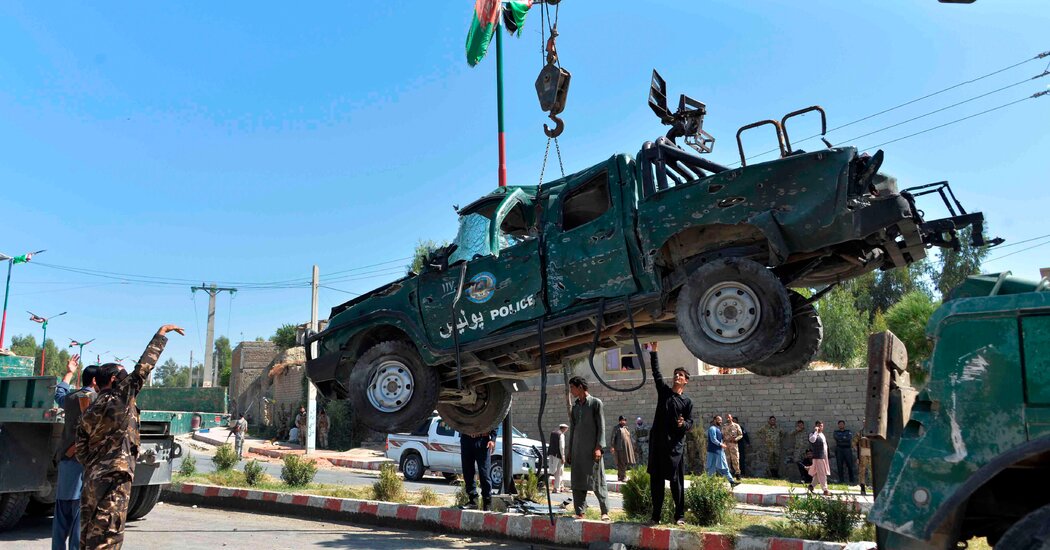 The following report compiles all significant security incidents confirmed by New York Times reporters throughout Afghanistan from the past seven days. It is necessarily incomplete as many local officials refuse to confirm casualty information. The report includes government claims of insurgent casualty figures, but in most cases these cannot be independently verified by The Times. Similarly, the reports do not include Taliban claims for their attacks on the government unless they can be verified. Both sides routinely inflate casualty totals for their opponents.

At least 53 pro-government forces and 37 civilians were killed over the past week, as representatives from the Afghan government and the Taliban met in Doha to negotiate a framework for peace. The deadliest attack took place in Nangarhar Province, where a truck bomb targeted the district governor’s office in Ghanikhel District, killing 13 civilians and one police officer. An additional 42 people, including 39 civilians and three police officers, were wounded in the explosion, for which no one has claimed responsibility. Later in the week, in eastern Laghman Province, the Taliban carried out a car bomb on the convoy of the governor of Laghman, killing four security forces and four civilians. Two security forces and 28 civilians were also wounded.

Two pro-government militia members were killed by Taliban marksmen in the Jabbar-e-Shahid village of Aqcha District.

A police officer was shot and killed by unknown gunmen on a motorcycle in the village of Kandiwal in Firoz Koh, the provincial capital.

A Humvee was hit by a roadside bomb in Khashrud District, killing two police officers and wounding six members of the National Directorate of Security.

The Taliban attacked security forces in the Rawza area of Imam Sahib District, killing four pro-government militia members, two police officers and one soldier. An additional eight security forces were wounded and 15 others were taken prisoner, while the Taliban seized weapons and military equipment, including two Humvees.

In a hospital in Kabul, Col. Mohammad Wara Andarbi, the deputy police chief of Baghlan Province, died of wounds sustained in a battle with the Taliban last week.

One police officer was killed and another was wounded during a military operation in Firoz Koh. Local authorities claimed that 24 Taliban members were killed and 14 others were wounded.

The Taliban ambushed a group of soldiers in the Chashma-e-Shir area of Pul-i-Kumri, the provincial capital. The soldiers were driving toward Samangan Province in a private vehicle and all four were killed in the ambush.

Oct. 7 Takhar Province: one civilian and one security force killed

The Taliban attacked the Nahr-e-Aab village of Farkhar District, killing one pro-government militia member. A civilian was also killed in the crossfire.

A civilian vehicle was hit by a roadside bomb in Tagab District, killing three civilians, including a woman.

The Taliban attacked a security outpost in the Ibrahim Manda area of Sharesafa District, killing three police officers and wounding four others.

A Humvee was hit by a roadside bomb in the Anda Kori area of Dawlat Shah District, killing the district governor, Sayid Sharif Pacha, and two police officers.

The Taliban abducted and killed a soldier who was traveling by public transport in the village of Laman in Qala-e-Naw, the provincial capital.

A police truck stolen by the Taliban and loaded with explosives blew up near a security outpost in the Yakhchal area of Greshk District, killing two soldiers and wounding five others.

The Taliban hid explosives in a tunnel under a security outpost in Khas Uruzgan District. When the explosives detonated, eight police officers were killed and three others were wounded.

A female employee of an appeal court in Khost City, the provincial capital, was assassinated next to her house in the northern part of the city.

A police vehicle was hit by a roadside bomb in the Seventh Police District of Lashkar Gah, the provincial capital, killing one police officer and wounding another.

A military vehicle was blown up by a roadside bomb in Basalan area of Nawa District, killing two police officers and wounding two others.

The Taliban attacked an army outpost in the village of Mahtab in Golran District, killing one soldier over two hours of fighting. Local officials claimed that one Taliban fighter was killed and four others were wounded.

A tribal elder was killed when a bomb attached to his vehicle exploded in the First Police District of Gardiz, the provincial capital.

The Taliban attacked a security outpost in the Kosa Qala village of Khwaja Sabz Posh District, killing one soldier and one member of the National Directorate of Security.

Two civilian government employees were shot and killed by unknown gunmen in the Tank-e-Chakari area of the 16th Police District of Kabul City, the capital.

A religious scholar was kidnapped and later killed in the Qom Gozar village of Dasht-e-Qala District. It remains unclear who was responsible for the killing.

A civilian vehicle was attacked by the Taliban in the Essakhel area of Tagab District, killing four civilians. The insurgents escaped from the area after the attack.

While walking home, two children were killed by a roadside bomb explosion in the Nadi village of Zari District.

A truck bomb targeted the district governor’s office in Ghanikhel District, killing 13 civilians and one police officer. An additional 42 people, including 39 civilians and three police officers, were wounded in the explosion, for which no one has claimed responsibility.

A member of the National Directorate of Security was shot and killed by the Taliban in the Pada Khwab area of Bagram District while on his way to work.

Two members of the National Directorate of Security were killed in a Taliban attack in Mandozai District while traveling to the provincial capital.

An employee of the provincial appeals court was shot and killed in the Habashkhel area of Matoon District while returning from evening prayer.

The Taliban killed a police officer near the police headquarters in Baharak District.

The Taliban ambushed police officers in Kohband District, killing two officers and wounding another. Local authorities claimed that one Taliban member was also killed in the clash.

Unknown gunmen opened fire on a group of people in Pul-e-Alam, the provincial capital, killing three civilians. The motivation for the killing is unclear.