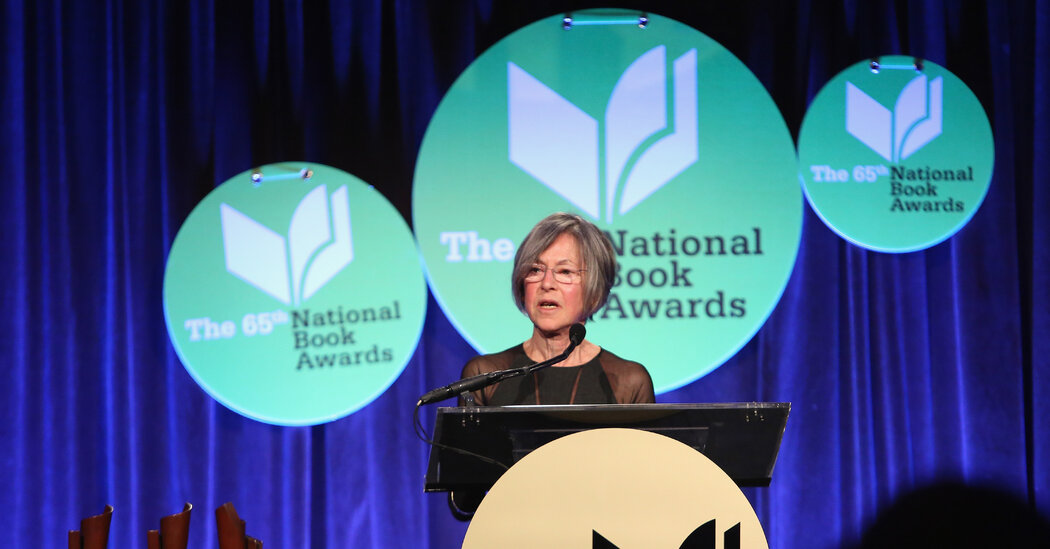 The Nobel Prize in Literature was awarded on Thursday to Louise Glück, one of America’s most celebrated poets, “for her unmistakable poetic voice that with austere beauty makes individual existence universal.”

The award was announced at a news conference in Stockholm.

Glück, who was born in New York in 1943, has written numerous poetry collections, many of which deal with the challenges of family life and growing older. They include “The Wild Iris,” for which she won a Pulitzer Prize in 1993, and “Faithful and Virtuous Night,” about mortality and grief, from 2014. She was named the United States’ poet laureate in 2003.

At the Nobel announcement, Anders Olsson, the chair of the prize-giving committee, praised her minimalist voice and especially poems that get to the heart of family life.

“Louise Glück’s voice is unmistakable,” he said. “It is candid and uncompromising, and it signals this poet wants to be understood.” But he also said her voice was also “full of humor and biting wit.”

“Ararat,” a collection of poems from 1990, was “the most brutal and sorrow-filled book of American poetry published in the last 25 years,” Dwight Garner wrote in a 2012 New York Times article.

William Logan, in a 2009 Times review of “A Village Life,” called Glück “perhaps the most popular literary poet in America.” Her audience may not be as large as others’, he wrote, but “part of her cachet is that her poems are like secret messages for the initiated.”

Glück is the first female poet to be awarded the prize since Wislawa Szymborska, a Polish writer, in 1996. Other poets to have received the award include Seamus Heaney, the Northern Irish poet, who won in 1995. She is the first American to win since Bob Dylan in 2016.

She will give her Nobel lecture in the United States because of coronavirus travel restrictions, said Mats Malm, the permanent secretary of the Swedish Academy, which awards the prize.

Last year, the academy was criticized after it awarded the prize to Peter Handke, an Austrian author and playwright who has been accused of genocide denial for questioning events during the Balkan Wars of the 1990s — including the Srebrenica massacre, in which about 8,000 Muslim men and boys were murdered.

That furor over the award came a year after the academy postponed the 2018 prize because of a scandal involving the husband of an academy member who was accused of sexual misconduct and of leaking information to bookmakers. That man, Jean-Claude Arnault, was later sentenced to two years in prison for rape.

Those events were a low point for the prize, which dates to 1901 and has been awarded to some of the world’s most influential and revered novelists, poets and playwrights. Prominent past laureates include Toni Morrison, Kazuo Ishiguro, Alice Munro, Gabriel García Márquez, Saul Bellow and Albert Camus. In 1964, the academy chose Jean-Paul Sartre, who refused the honor, saying that writers should not accept awards.

Given the recent controversies, many observers expected this year’s award to go to an uncontroversial choice. “The Swedish Academy knows they can’t afford another scandal,” Bjorn Wiman, the culture editor of the Swedish newspaper Dagens Nyheter, said in a telephone interview before the announcement.

But an adviser to the prize-giving committee denied this in an email on Wednesday. “We haven’t focused on making a ‘safe’ pick or discussed the choice in such terms,” said Rebecka Karde, a journalist and one of three external experts who helped choose this year’s winner. “It’s all about the quality of the output of the writer who gets it.”

The Nobel Prize in Literature, which is given for a writer’s entire body of work and is regarded as perhaps the world’s most prestigious literary award, comes with a prize of 10 million Swedish krona, or about $1.1 million.

Who else won a Nobel Prize this year? ¶

When will the remaining Nobel Prizes be announced? ¶

Why the Coronavirus is More Likely to ‘Superspread’ Than the Flu