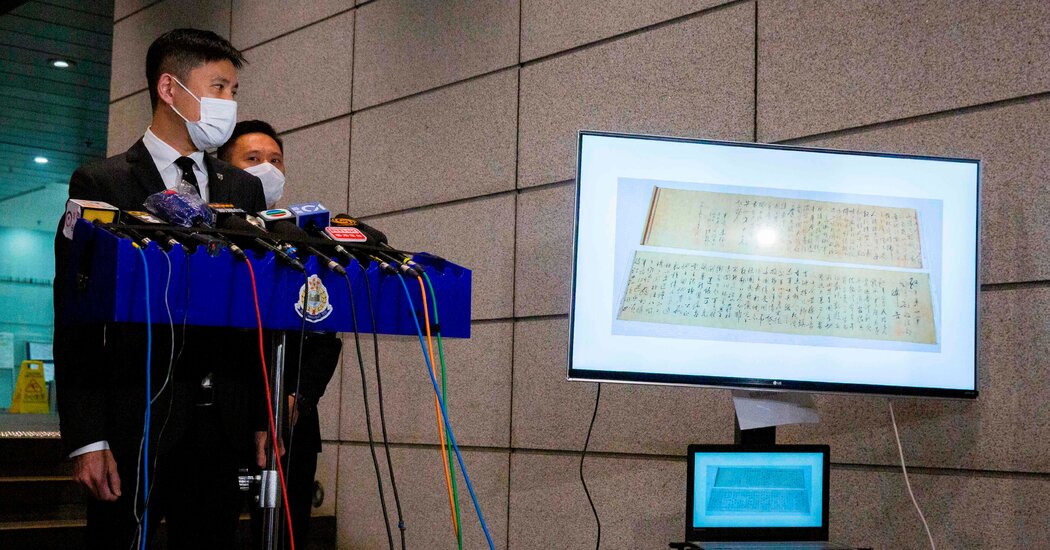 HONG KONG — The thieves left by taxi, hauling away $645 million in artifacts they had stolen from a Hong Kong apartment while the owner was in mainland China.

They took 24,000 vintage stamps, 10 bronze coins and seven calligraphy scrolls that the owner, Fu Chunxiao, said had been written by Mao Zedong.

The majority of the stolen items remain missing, but the scroll, measuring three yards, found its way to a buyer before it was recovered by the police.

“He found the calligraphy piece too long and difficult to display for viewers, so he cut it in two,” Ho Chun-tung, a police superintendent, told reporters this week, referring to the man who allegedly bought the stolen scroll. “Whether he knows the authenticity and value of the calligraphy is something we have to continue investigating.”

On Thursday, the police charged a 44-year-old suspect identified only as Wu with burglary. He was arrested in Hong Kong, along with another man identified as Tan, 47, who was accused of harboring “an offender.”

The alleged buyer, a 49-year-old man identified only as Lin, was arrested earlier in September, just after the heist. He was accused of handling stolen goods. Local news outlets said he had paid a mere $65 for the recovered scroll.

The collector, Mr. Fu, told The South China Post newspaper that he was devastated by the burglary — and by the damage to the scroll. He said it was the most valuable item among his stolen possessions. Mr. Fu put his total losses at $645 million, according to the police.

“It was heartbreaking to see it torn into two pieces,” he is quoted as saying about the scroll. “It will definitely affect its value, but the impact remains to be seen.”

A police spokeswoman said by phone that the authorities had not independently determined the value of the scroll. Auction houses dealing in Chinese art did not immediately respond to emails seeking comment.

Mr. Fu, who is originally from Sichuan Province, according to local news reports, could not immediately contacted. He is known as a collector of items from the Mao era. In 2018, Mr. Fu organized a Hong Kong exhibition of 200 stamps bearing the face of Mao. (The founding father of the People’s Republic of China, Mao ruled as the chairman of the Communist Party from 1949 until his death in 1976.)

The police said the break in the case occurred when a cabdriver who picked up the men on the day of the burglary came forward with information. The authorities are still looking for two other suspects. The three men arrested so far are originally from mainland China, the police said.

The official residence of the Australian consul general was broken into last Friday. In June, two men scaled 19 stories of bamboo scaffolding to steal a safe deposit box in a wealthy neighborhood of Hong Kong in June. In September, a group robbed a man who was carrying millions of dollars in cash in his backpack.

Burglars have more often targeted unoccupied homes on the Chinese territory, Mr. Ho, the senior police superintendent, said. But they are not limited to items of high commercial value.

At the start of the coronavirus outbreak in February, as consumers bought toilet paper in bulk for fear it would run out, three masked robbers stole more than $100 worth of toilet paper outside a supermarket while holding up a deliveryman by knife point.

Infected by a Virus, a Killer Fungus Turns Into a Friend