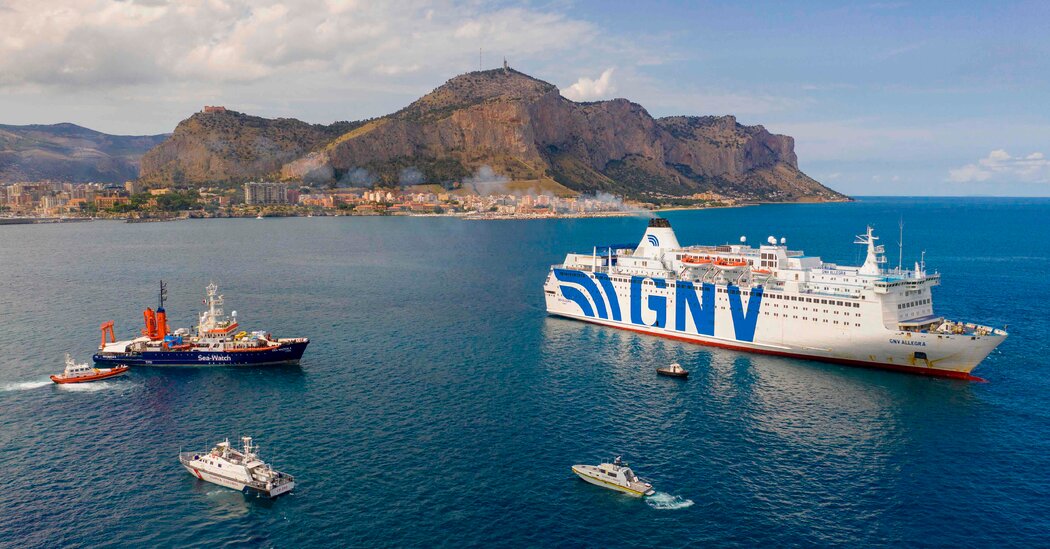 Italian authorities are investigating the death of a 15-year old boy from Ivory Coast who spent days on a “quarantine vessel” where migrants are being confined as a measure to prevent the spread of the coronavirus.

The boy, Abou Diakite, died Monday at a hospital in Palermo, in the north of Sicily, after being evacuated from the Allegra, a cruise ship used by Italian authorities to quarantine migrants arriving this year. The cause of death has yet to be determined.

“We will see what the autopsy reveals, but it is painful that this young boy died here alone, while he was looking for hope of a better life,” said Michele Calantropo, a human rights advocate and lawyer for Abou’s guardian.

A boat carrying Abou and fellow migrants was rescued off the coast of Libya on Sept. 10 by the nonprofit organization Proactiva Open Arms. Many migrants from sub-Saharan Africa who hope to reach Europe must pass through Libya, where militias control the cross-Mediterranean smuggling routes.

Abou showed symptoms of “strong malnutrition, common to the majority of people on the boat,” Open Arms said in a statement.

“They all arrive in terrible conditions after going through horrendous tortures in Libya,” Mr. Calantropo said. “The pandemic only exacerbated that.”

Alessandra Puccio, Mr. Diakite’s legal guardian, assigned by the authorities from a list of volunteers, said the quarantine ship had space to isolate migrants, but little capacity for testing.

“I am waiting to hear from prosecutors whether these ships have enough doctors and medical staff, because they host hundreds of people,” she said.

Italy began putting migrants on board the vessels this summer after concerns emerged, often pushed by far-right politicians, that they were spreading the coronavirus. Data shows, however, that most of the cases in the second wave of infections in Italy originated either in neighboring European countries or domestically.

A week after Abou’s rescue, when he and migrants accompanying him were still on the Open Arms vessel, he started having a temperature and lower back pain, and the medical staff gave him antibiotics.

The staff also discovered marks on his body that could have been the result of torture, the aid group said. He told the medical staff through a friend acting as an interpreter that they were old wounds from childhood. An ultrasound performed on the boat did not show any “evident problem,” Open Arms said. He tested negative for Covid-19 twice.

The following day, he was transferred to the quarantine ship, and his medical file was handed over to the Red Cross doctor aboard the Allegra. Abou could walk by himself and was able to communicate.

It was only in late September, almost at the end of his quarantine, that he fell sick again and was hastily transported to the hospital in Palermo.

“We are deeply saddened by Abou’s death and await to understand why it happened,” Open Arms said on its website. “The people that we rescue are all in precarious health conditions and went through violence and abuse.”

The organization called on the authorities to allow the migrants to disembark in “a safe port as soon as possible and spend the quarantine in adequate facilities.”

An inspection of the Italian cruise ships hosting migrants, conducted by a government-funded group, has found onboard living conditions to be adequate.

“Migrants have a cabin each and those who test positive are hosted on a separate deck from the others, and that is already remarkable considering the crowded centers on the mainland,” said Mauro Palma, president of the group, the National Guarantor for the Rights of Persons Detained or Deprived of Liberty. He added that he had not examined Abou’s medical records and could not speak specifically about his case.

Mr. Palma, whose group is tasked with conducting independent assessments of the living conditions, said that he met qualified Red Cross personnel and that migrants reported being treated well.

“Culturally, we tend to observe these people’s conditions superficially, we underestimate their journey, the lives they had to live before and what being held prisoner in Libya means,” he said. “And that terrible past can hide any form of illness.”

How to Create Your Own Herbal Tea Garden