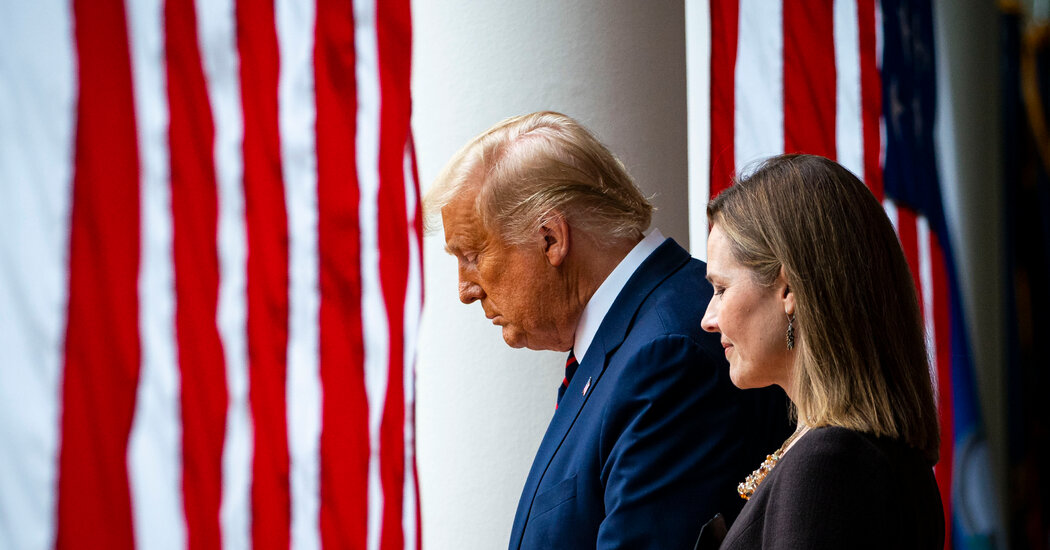 Have you noticed that right now everything is about Amy Coney Barrett, the new Supreme Court nominee?

OK, you were thinking everything was about the coronavirus. But where did a lot of our alleged national leaders seem to get infected? The party Donald Trump gave to celebrate her nomination. Really, you might have been safer going to a midnight fraternity party in somebody’s basement.

When Trump decided he wanted to drop negotiations on a new coronavirus relief bill, he said the Senate needed to devote all its attention to Judge Barrett.

Now the economy could go to hell in a handbasket if Congress fails to act and there’s no more aid to the states, cities or faltering industries. If so, do we chalk it up to Amy? Not saying, obviously, that she planned to create mass unemployment. But there’s just something about the nomination that makes everything wacky. Or I guess the word should be wackier, given that we’re starting out with a president who claims it was his duty to get Covid-19. (“I stood out front and I led.”)

Unless you have been living in a fetal position under your bed — which is perfectly understandable, really — you’ve heard that Trump and Senate Majority Leader Mitch McConnell are intent on getting Barrett ensconced in Ruth Bader Ginsburg’s seat as fast as possible. McConnell is undoubtedly worried about Joe Biden becoming president-elect. Trump does not live in the real world, but he still wants a friendly new face on the court after the election returns come in.

So, the Judiciary Committee, led by the omnipresent Lindsey Graham, is going to hold hearings on the nomination. Then the Republicans are going to race, race, race through the process so the Senate can vote to approve the nomination at least a week before the election.

That’s way too fast. Barrett has had a fine career, but she’s only served as a judge for three years. (Ginsburg had put in 13.) There’s a lot about her positions that the country would want to hear discussed. At length. She espouses anti-abortion views that are much more conservative than those of most other Americans. It seems that she’d be unenthusiastic about government action on things like global warming. She apparently was closely connected to a conservative Christian group called People of Praise that has a history of stressing a husband’s role as head of the household.

McConnell says questions about Barrett’s religious background “are a disgrace,” and it is quite true that senators would have to be very careful on that line of inquiry. Which is why it’s so important to have those serious, unhurried hearings.

And hey, have you noticed that Republican senators are starting to come down with the coronavirus? Two Judiciary Committee members, Mike Lee and Thom Tillis, are sick and now presumably infectious. (Earlier, Lee was at Trump’s Judge Amy party, where he seemed to be hugging about half the attendees.) So Mitch wants to let folks do their committee work from home if they prefer, in the basic Zoomish method we have all come to know and hate.

“A virtual hearing is virtually no hearing at all,” protested Minority Leader Chuck Schumer. Well, yeah. And this is possibly the most important vote some of these senators will take in their entire term of office — one that could shift the court’s center of gravity far to the right for decades.

Sooner or later — well, sooner since these guys have less than four weeks until Election Day — the Senate will have to actually get together in person and vote. McConnell will need almost all of his Republicans to show up, no matter what their viral condition.

The idea of bringing in an ailing lawmaker for a big vote is not unheard-of. In 1918, when Congress was finally ready to pass a constitutional amendment guaranteeing women the right to vote, one House member who had been in the hospital for six months managed to stagger in. Another refused to have his newly broken arm and shoulder set for fear of missing the vote. Another man had himself carried in on a stretcher.

In 1964, Senator Clair Engle of California wheeled into the Capitol so he could vote for the civil rights bill. The poor man had undergone two brain operations and was too ill to speak, but he managed to point to his eye, signaling “aye” for one of the most important pieces of legislation in modern American history.

What do you think the chances are an Amy Coney Barrett vote will be less inspiring? For one thing, these guys are not being wheeled in from an appendectomy. They’re infectious.

Republican Ron Johnson of Wisconsin, one of the ailing, says he’ll “go in a moon suit if necessary.” I guess if nothing else, it’d be a chance for Trump to imagine his space program was a success.

Think about this, people. The U.S. Senate is going to conduct business in the middle of a pandemic that is already sweeping through the Capitol. Republicans are going to do it because they feel compelled to ram through the Supreme Court nomination of a woman whose views do not reflect most of American society’s, just days before a presidential election in which the nation can make it very clear what kind of president and Senate it prefers.

Do you think it’s possible that certain Republicans don’t think that’s going to go their way?

One terrorist killed in encounter in J&K`s Anantnag, operation continues