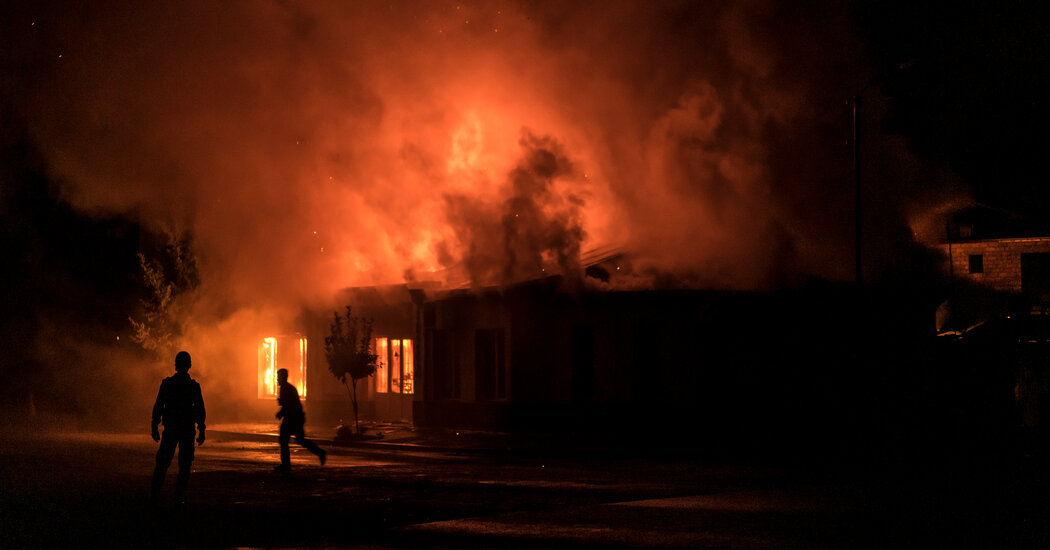 Once again, the bitterly contested claims to the mountainous region of Nagorno-Karabakh in the South Caucasus have erupted into violence. What exactly is going on is difficult to glean from the exaggerated statements and propaganda of the feuding Armenians and Azerbaijanis, but hundreds have been killed, rockets have struck both the capital of the enclave and also Azerbaijan’s second-largest city, and the fighting threatens to escalate into a regional debacle with ramifications far beyond.

In past eruptions, Russia, the United States and France — the “Minsk Group” charged by the Organization for Security and Cooperation in Europe with seeking a resolution of the conflict — have managed to restore calm, though never establish a permanent peace. Refreezing the conflict without resolving the deep hatreds and differences at its core is not the optimal solution, but the immediate goal is to put out the flames before they spread. For that to happen, a dangerous new element has to be confronted. That is Turkey.

President Recep Tayyip Erdogan of Turkey, whose authoritarian ambitions at home have been matched by his growing aggressiveness in the region, has taken sides with Azerbaijan, whose Muslim majority is of the same Turkic ethnic group as the Turks. Mr. Erdogan has dismissed calls to help secure a cease-fire while vowing to support Azerbaijan until it has recovered territory lost to ethnic Armenians when the Soviet Union disintegrated. “Turkey continues to stand with the friendly and brotherly Azerbaijan with all its facilities and heart,” he declared. That has meant supplying arms to an already well-armed Azerbaijan and, according to France, injecting Syrian mercenaries into the fray.

All that spells danger. Though the conflict is largely over an enclave with little economic or strategic importance to the world at large, it has ramifications beyond its 1,700 square miles. Turkey is a member of NATO with a long history of bad blood with Armenia over the genocide of Ottoman Armenians a century ago. Important gas and oil pipelines run through the South Caucasus; Israel sells arms to Azerbaijan; Armenia has the active support of a large and cohesive diaspora in France and the United States; and Iran shares a border with both Armenia and Azerbaijan and has sizable minorities of ethnic Azerbaijanis and Armenians who already have begun to hold demonstrations.

Russia’s position is the knottiest. Of several unresolved conflicts left in the wake of the dissolution of the Soviet Union, Nagorno-Karabakh is arguably the one Russia most wants to keep frozen. The conflict dates to the Soviet partitioning of its empire in 1923, which left Nagorno-Karabakh and its largely Christian Armenian population inside largely Muslim Azerbaijan. As soon as the Soviet Union fell apart the fighting began, a vicious war that left 30,000 dead and Nagorno-Karabakh as a self-proclaimed republic of ethnic Armenians recognized by no other country but supported by Armenia and its diaspora, on land universally recognized as Azerbaijani. It was the “frozen conflict” par excellence, fed by deep ethnic passion and grievances and impervious to rational solutions.

Moscow, however, managed to maintain good relations with both former Soviet republics, Armenia and Azerbaijan, and sells arms to both. Russia, moreover, has a mutual-defense pact with Armenia and a military base there, but while that would seem to tilt Russia toward Armenia, politics pulls the other way: Azerbaijan is ruled by President Ilham Aliyev, the autocratic son of the last Soviet boss of Azerbaijan and therefore more to the liking of the Russian president, Vladimir Putin. Armenia threw out its Soviet-style ruling clique in 2018 and elected a more liberal government.

In normal times, a strong United States working with Russia and France might have had the clout to pull Turkey back, as they did after an outbreak of violence in 2016. In this crisis, President Trump actually has a chance to put his curious affinity for both Mr. Putin and Mr. Erdogan to a good use. But the Trump administration is not one likely to care about the fighting, even if it were not deeply embroiled in the pandemic and the election campaign. France alone can do little. Moscow, too, probably has little stomach for another foreign crisis, or for a confrontation with Turkey, at a time it is facing a popular uprising in Belarus and a continuing war in Syria, along with the economic ravages of the coronavirus.

But doing nothing is not an option for dealing with a wildfire that, left unchecked, can rapidly spread. Whether Mr. Putin likes it or not, he has the greatest responsibility and the most effective levers to restrain his former empire-mates and dissuade Mr. Erdogan from a dangerous adventure.

Extending a Lifeline to Museums