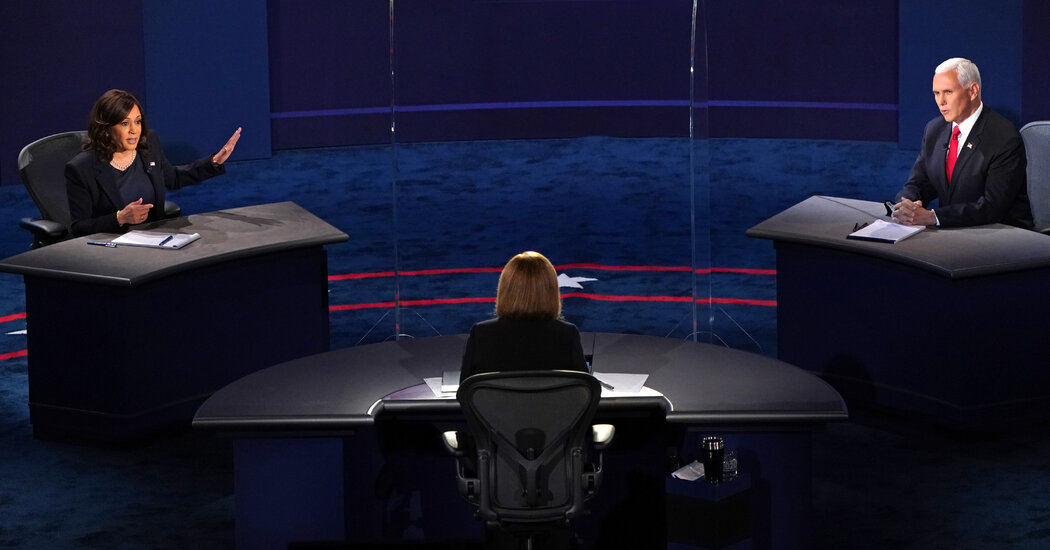 Vice President Mike Pence and Senator Kamala Harris clashed over the Trump administration’s handling of the coronavirus pandemic on Wednesday night, with Mr. Pence defending the White House’s record without addressing its fundamental failures, while Ms. Harris accused him and President Trump of presiding over a catastrophic failure in public-health policy.

At the end of the debate, Mr. Pence’s wife, Karen Pence, broke policies set by the debate commission and Salt Lake County when she stepped onstage without wearing a face mask, flouting health precautions, as the candidates were joined by their spouses. Ms. Harris’s husband, Douglas Emhoff, wore a face mask. It was unclear whether Ms. Pence removed it in the moments before appearing on television, or had refused to wear it throughout the debate, as Mr. Trump’s family did last week.

The commission updated its protocols for the debate after Mr. Trump and several members of his staff tested positive for the coronavirus in the days after last week’s presidential debate between Mr. Trump and former Vice President Joseph R. Biden Jr., the Democratic nominee.

For Wednesday’s debate, the commission required “everyone in the debate hall” to wear a mask and submit to testing for the coronavirus, according to an updated fact sheet it released on Monday. The commission also installed plexiglass dividers between Mr. Pence and Ms. Harris.

During the debate, as Ms. Harris, the California Democrat, attacked Mr. Trump’s record as the vice president sought to recast the president’s handling of the pandemic and other issues, often in plain defiance of the facts.

Ms. Harris opened the debate by calling the White House’s response to the disease “the greatest failure of any presidential administration in the history of our country” and saying Mr. Pence and Mr. Trump had “forfeited their right to re-election.”

Time Is Short, Mail Is Slow and Courts Keep Changing the Rules. What Should Voters Do?

How America Lost the War on Covid-19

Time Is Short, Mail Is Slow and Courts Keep Changing the...