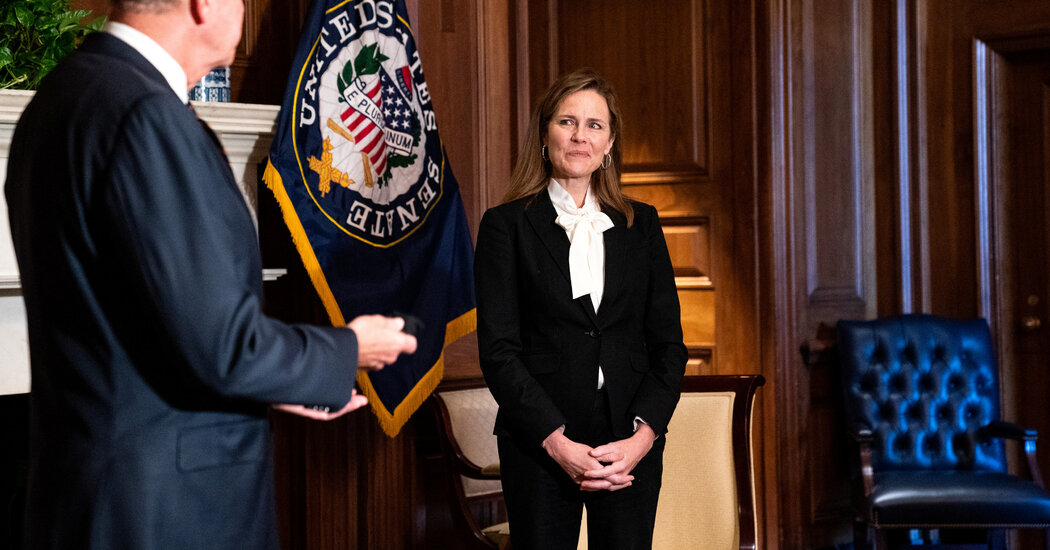 Much of the point of the Republican alliance with Donald Trump was to establish control over the federal judiciary as a whole and the Supreme Court in particular. The deal was simple: Republicans would support him and his agenda, such as it was. He would nominate a cadre of reliably conservative judges, handpicked by the Federalist Society and backed by groups like the Judicial Crisis Network, to lifetime positions on the federal bench, where they would write conservative ideology into the Constitution under the cover of an “originalism” that conveniently and consistently aligns with Republican Party political preferences.

That’s why they are desperate to elevate Amy Coney Barrett, whose confirmation would give Republicans a 6-3 conservative majority on the Supreme Court. She represents victory, the culmination of a generational struggle to reshape the courts in their favor. From the point of view of Mitch McConnell and his conservative activist allies, she is worth losing the White House and risking the Senate for. She is worth the chaos and disorder of the Trump administration, worth the scandal and controversy, worth the racism, cruelty and indifference to human life. She is worth his botched response to the pandemic, worth the death and deprivation that has followed from his refusal to govern the country and attend to the welfare of its people.

Or rather, she will have been worth it, if Democrats win the White House, win the Senate and leave the judicial status quo untouched. If they do nothing, then Trump, McConnell and the Republican Party will have gotten away with nearly wrecking constitutional democracy — and inflicting needless suffering on millions of Americans — for the sake of ideology, partisanship and venal self-interest. What’s more, by refusing to act, Democrats will have crippled any agenda they had hoped to accomplish.

To allow the American people to govern themselves, to rein in the judiciary and break a would-be reactionary super-legislature — to show Republicans that they cannot keep the ill-gotten gains of the Trump years — Democrats will need to expand the courts.

Having said all of that, there are actually several straightforward, nonpartisan reasons for increasing the entire federal judiciary and adding additional Supreme Court justices. The last major expansion was 30 years ago with the Judgeship Bill of 1990. Since then, the population of the United States has grown from roughly 249 million to just over 330 million. With ever more litigants and ever more cases, the country needs more judges.

The judiciary itself said as much in a report released this summer as a statement before the Senate Judiciary Committee. “The effects of increasing caseloads without a corresponding increase in judges are profound,” wrote Judge Brian Miller of the United States District Court for the Eastern District of Arkansas on behalf of the Judicial Conference of the United States. He continued:

Delays increase expenses for civil litigants and may increase the length of time criminal defendants are held pending trial. Substantial delays lead to lack of respect for the Judiciary and the judicial process. The problem is so severe that potential litigants may be avoiding federal court altogether.

Using a formula tied to caseload per court, Miller recommended an additional 65 district judgeships. This, he said, was “far fewer judgeships than the caseload increases and other factors would suggest are now required” but would represent a substantive improvement over the status quo.

In addition, a growing and diversifying country should see itself reflected at every level of the federal judiciary. More judges means more opportunities for representation, both for district and appellate courts and for the Supreme Court. With two or four or even six additional justices, lawmakers could shape the court to look a little more like America as it is.

But we can talk later about the exact shape of reform. The important point now is that consequences matter, and losing an election — even by a landslide, if that’s what happens — isn’t a big enough consequence for the Republican Party’s gamble with American democracy.

Remember, although many Republicans support Trump unreservedly and share his sensibilities, many don’t. Judges were the glue that bound them to his administration and a key reason most Republican lawmakers said nothing as he trashed the rule of law and made a mockery of democratic governance. Judges are why, when faced with an unambiguously impeachable offense, the Republican Senate voted to acquit Trump of all charges. It was the tantalizing promise of a powerful, conservative judiciary that gave Republicans every incentive to act as if Trump was outside the bounds of the Constitution. The only way to avert moral hazard and keep this from happening again is to make Republicans pay a price for the dangerous risk they took with the country. Expanding the courts is that price.

Joe Biden and Kamala Harris seem aware of the need to take this step, or at least seriously consider it, which helps explain why they have refused to answer one way or the other lately. But I think the country would benefit by having this argument out in the open, not least because the larger public is also interested in this sort of accountability, as it was when it gave Democrats a House majority in 2018, and when it backed impeachment at the start of this year.

There’s an obvious concern here — tit-for-tat. What is to stop a future Republican majority from expanding — or shrinking — the courts in turn? The answer is nothing. And I’m not sure there should be. If Republicans win the White House and control of Congress, then they should have the right to govern, and if governing means changing the composition of the court, they should have the right to do so. Much more important than somehow constraining future Republicans is working to make our democracy more fair, with equal representation, where one person means one vote. Winning power in Washington should require as close to a popular majority as possible. If Republicans can win one, then it’s their ballgame, as long as the public sticks with them.

It is also not clear that an 11- or 17- or even 27-member Supreme Court is necessarily a bad thing. With more members, individual confirmation battles would be less heated and consequential. And tied even tighter to ordinary politics, the court might be more circumspect about striking down laws by duly elected lawmakers. The promise of tit-for-tat may actually be the thing that lowers the temperature of court battles, which might make it possible for both sides to find a new equilibrium.

I have no doubt that Republicans will confirm Barrett, if they can manage it. If the past four years have been a smash and grab, where Trump smashes our institutions and the Republican Party grabs as much political loot as it can carry, then an additional seat on the Supreme Court is too valuable a trophy to give up. But there is no rule that says you get to keep stolen goods, and the Barrett seat — like the Gorsuch seat — represents a theft.

If Democrats make Republicans pay a political price in November for their rank and ruinous opportunism, then in January they should use their power to restore to the people what was taken from them.

Will we remember how hugging works when we are allowed to do it again?

Even as Cases Rise, Europe Is Learning to Live With the Coronavirus