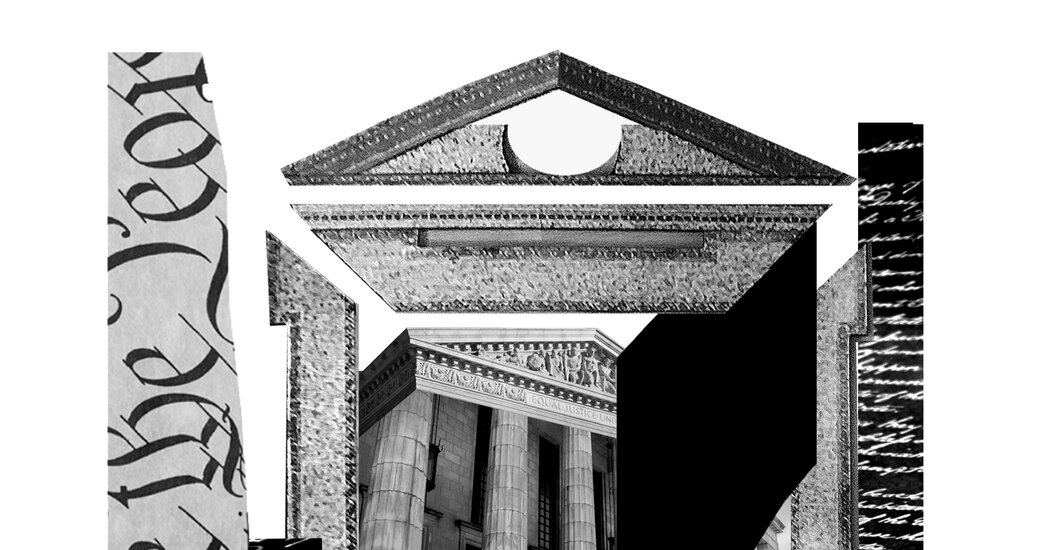 When President Trump introduced Judge Amy Coney Barrett as his third nominee to the Supreme Court, he praised her “unyielding loyalty to the Constitution.” The implicit premise was that her fidelity to the nation’s founding document as a judge could excuse his violations of the Constitution as president. But the highest test of politicians’ constitutional scruples is not how they populate another branch of government. It is how they carry out their responsibilities in their own spheres. By that test, Mr. Trump’s loyalty to the Constitution has yielded to political convenience time and again.

The rhetoric surrounding Judge Barrett’s nomination, which the Senate Judiciary Committee is set to take up on Monday, reflects a troubling strain of constitutional decay: the belief that presidents and legislators fight over policy, while the Constitution is the province of the courts. This view suggests that elected officials can check the box on their own oaths to the Constitution not by upholding them but rather by outsourcing the defense of the Constitution to judges.

Last month, Mr. Trump declared that “apart from matters of war and peace, the nomination of a Supreme Court justice is the most important decision an American President can make.” Exhorting his fellow Republicans to replace Justice Ruth Bader Ginsburg, the president also said that “we were put in this position of power and importance to make decisions for the people who so proudly elected us, the most important of which has long been considered to be the selection of United States Supreme Court Justices.” Not faithfully executing the law, which Article II of the Constitution requires presidents to do?

Similarly, in late 2017, Senator Mitch McConnell, the Republican majority leader shepherding Judge Barrett’s nomination, likewise cited the confirmation of conservative judges as the most important achievement of his 36 years in the U.S. Senate. Not the essential constitutional power of Congress, deliberating on legislation?

James Madison assumed every federal officeholder, not simply judges, was required to maintain the Constitution. As a member of the House of Representatives, Madison routinely participated in debates about whether proposed legislation was constitutional, not just whether it was expedient. As president, his view of executive power was so modest that he would not even lobby members of Congress over dinner, as his predecessor, Thomas Jefferson, had done.

Mr. Trump has not felt comparably constrained. He operates in an alternate constitutional reality in which criticism of him is treason, the process of electing a chief magistrate requires the incumbent to accept the result, and Article II accords him, as Mr. Trump put it last year, “the right to do whatever I want as president.”

In keeping with the tradition of his recent predecessors, he has asserted executive power without any sense of constitutional self-control, sometimes in startling ways. Campaigning for the White House, he famously claimed he could shoot someone in the middle of Fifth Avenue and not lose voters. Last year, one of his lawyers asserted that occupants of the office were immune to prosecution even if they did commit murder, a view the Supreme Court rejected as placing the president above the law. Recently, when Congress did not agree with him about economic relief in the wake of the coronavirus pandemic, Mr. Trump issued a series of executive orders attempting to achieve through decree what constitutional processes denied him.

For its part, Congress suffers from the opposite problem. Rather than expanding its power, it often declines to exercise it at all. During the Trump era, Mr. McConnell, once known as an institutionalist who defended the Senate’s prerogatives, has abetted this surrender of legislative authority.

When a newly inaugurated Mr. Trump used a 1952 law to ban entry into the United States from several Muslim-majority countries, Mr. McConnell raised constitutional objections. As a legislator, he could have addressed them by working to curtail the decades-old legislative authority Mr. Trump cited. Instead of asserting personal responsibility for the Constitution, though, Mr. McConnell punted to the judiciary: “Ultimately,” he said, “it is going to be decided in the courts as to whether or not this has gone too far.” That is not what Mr. McConnell’s oath says: On the first day of each of his six terms, he has sworn that he, not someone else, would “support and defend the Constitution of the United States.”

In February 2019, Mr. Trump’s insistence on funding for his coveted border wall threatened a government shutdown. Mr. McConnell helped avert it by supporting the president’s unconstitutional contention that he could divert funds by declaring a bogus national emergency. As Mr. Trump’s impeachment trial loomed in late 2019, Mr. McConnell acknowledged with astonishing candor that he did not regard the Senate as independent from the president: “Everything I do during this, I’m coordinating with the White House counsel,” he declared on Fox News.

The image of Mr. Trump and Mr. McConnell as constitutional defenders because they support originalist judges is itself a strange breed of originalism. It assumes that judges should adhere to the original meaning of the Constitution with respect to everything but the Constitution’s modest view of judicial power. Yet there is no Madisonian case for seeing judges as more responsible for the Constitution than anyone else who holds national office.

In abrogating their own constitutional responsibilities, Mr. Trump and Mr. McConnell have often referred to Democratic support of President Barack Obama’s use of unilateral executive authority. They are correct to note that Democrats were also complicit in constitutional abuses. Mr. Obama’s executive orders on topics from health care to immigration extended the imperial presidency into the domestic realm. Many of the Democrats opposing Mr. Trump’s assertions of executive power now were quiet then.

But this situational constitutionalism is exactly the problem, and a party whose platform proclaims “a rebirth of constitutional government” bears a particular responsibility to break the cycle. It cannot do so through judges alone because the Constitution is not merely a judicial instrument. Far from it. Every elected official is a constitutional custodian. If Mr. Trump and Mr. McConnell — or their eventual successors — want to proclaim themselves champions of America’s founding principles, the best way for them to prove it is not by delegating the Constitution’s defense to judges. It is by undertaking it themselves.

Greg Weiner (@GregWeiner1) is a political scientist at Assumption University, a visiting scholar at the American Enterprise Institute and the author of “The Political Constitution: The Case Against Judicial Supremacy.”

Trying to Hammer Iran With U.N. Sanctions, U.S. Issues More of Its Own