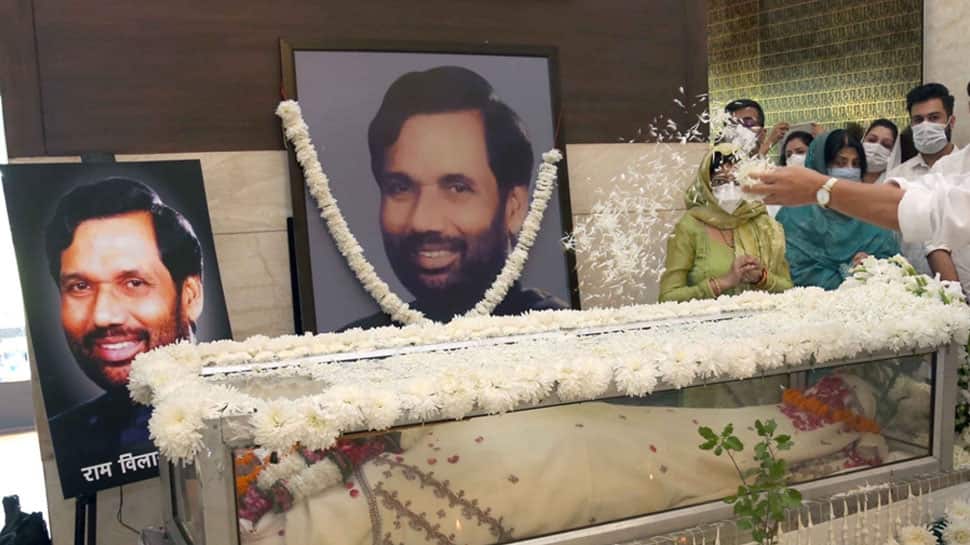 The mortal remains of late Lok Janshakti Party leader Ram Vilas Paswan will be taken to Patna on Friday and his last rites will be performed on October 10 (Saturday). Paswan, one of India’s most prominent Dalit leaders and eight-time Lok Sabha MP died on October 8 (Thursday) at the age of 74. He was part of several BJP-led NDA and Congress-led UPA governments.

The body of the Paswan will be taken from Delhi to Patna by his son Chirag Paswan on Friday at 5 pm. From the Patna airport, his mortal remains will be directly taken to the Vidhan Sabha Bhavan and then to LJP office in Patna. Late Ram Vilas Paswan’s body will be kept in the party office till 10-30 pm for party people to pay their respects.

From 8 am on Saturday, his mortal remains will be kept at his Boring Road, SK Puri residence for people to pay their tribute. The funeral will take place at Janardan Ghat Digha on Saturday at 1.30 pm. Paswan’s son Chirag will perform the last rites.

The Union Cabinet approved a state funeral for Paswan and passed the following resolution saying, “The Cabinet expresses profound sorrow over the sad demise of Ram Vilas Paswan, Union Minister for Consumer Affairs, Food and Public Distribution. In his passing away, the nation has lost an eminent leader, a distinguished parliamentarian and an able administrator.”

Earlier on Friday, Ram Vilas Paswan’s mortal remains were taken to his residence in the national capital from the All India Institute of Medical Sciences (AIIMS), where he breathed his last on  Thursday. Union Health Minister Dr Harsh Vardhan among others were present at the AIIMS this morning. Meanwhile, flags at Rashtrapati Bhavan and Parliament are flying at half-mast to condole the demise of the Union Minister.

As a mark of respect to Cabinet Minister Ram Vilas Paswan, who passed away on Thursday, the Union Ministry of Home Affairs (MHA) announced that the National flag will be flown at half-mast on Friday in the national capital and capitals of all States and Union Territories (UTs) where it is regularly flown, and also on the day of the funeral at the place where the funeral will take place.

LeBron James and the Burden of Being Great(est)

Enforcement Directorate attaches assets worth Rs 7 crores of Chennai based jewellery merchant in...

Big Ten Will Play Fall Sports Only Within Conference, if at All