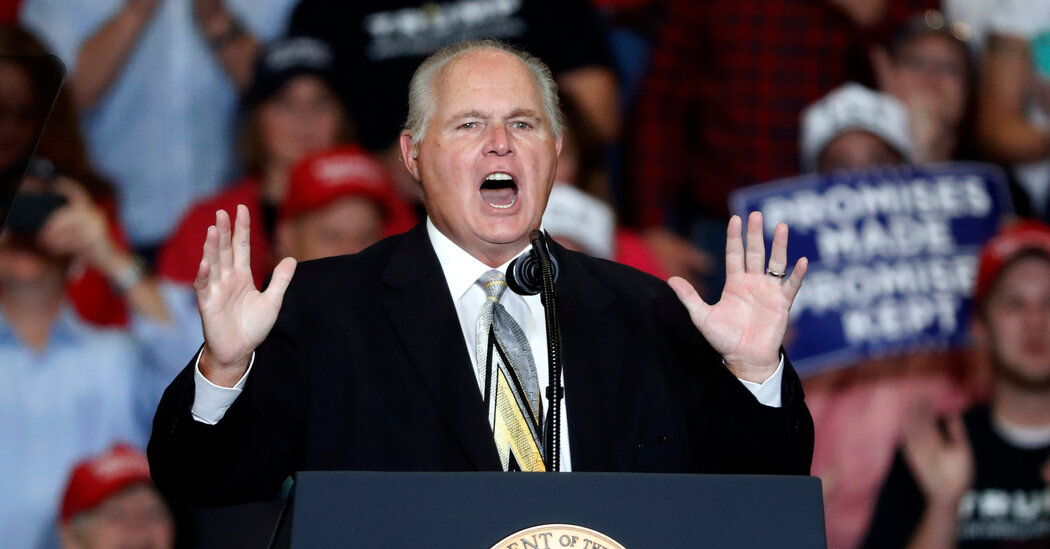 At least 15 million Americans every week tune into one of the top 15 talk radio programs. They are not monolithically conservative, but they are overwhelmingly so. A dozen of the top 15 shows feature conservative or libertarian hosts — with devoted followings like Rush Limbaugh’s “Dittoheads” or Michael Savage’s “Savage Nation” — and only one leans left.

Talk radio may face an aging audience, a decline in ad revenue and competition from new mass media forms like podcasts, but there are still millions of Americans whose politics are shaped by what they listen to on talk radio all day, every day. Fox News gets more of the attention for shaping conservative opinion and for its influence on the Trump administration, but we shouldn’t overlook the power of conservative talk radio.

The conservatism of talk radio only partly overlaps with institutional conservatism, that of right-wing Washington think tanks, magazines and the Republican Party itself. By the early 2000s, it had embraced a version of conservatism that is less focused on free markets and small government and more focused on ethnonationalism and populism. It is, in short, the core of Trumpism — now and in the future, with or without a President Trump.

Talk radio’s power is rooted in the sheer volume of content being produced each week. The typical major talk radio show is produced every weekday and runs three hours, so just the top 15 shows are putting out around 45 hours of content every day. Even setting aside hundreds of additional local shows, the dedicated fan can listen to nothing but conservative talk radio all day, every day of the week, and never catch up.

Yet talk radio still somehow manages to fly below the national media radar. In large part, that is because media consumption pattens are segregated by class. If you visit a carpentry shop or factory floor, or hitch a ride with a long-haul truck driver, odds are that talk radio is a fixture of the aural landscape. But many white-collar workers, journalists included, struggle to understand the reach of talk radio because they don’t listen to it, and don’t know anyone who does.

Moreover, anyone who wants to make an effort to understand talk radio runs into a barrier immediately: Because of the ocean of content, one must listen to it at great length, a daunting task for anyone not already sympathetic with a host’s conservative views. The time commitment suggests the depth of listener loyalty.

Each show has its own long-running inside jokes and references, a kind of linguistic shorthand that unites fans and repels outside examination. And since shows have begun to regularly publish online transcripts only in the past decade or so, journalists and scholars have found it hard to wade through all the content.

As Jim Derych, the author of “Confessions of a Former Dittohead,” put it, Rush Limbaugh “makes you feel like an insider — like you know what’s going on politically, and everyone else is an idiot.” There is power in that feeling, the proposition that you and the radio elect have been awakened to a hidden truth about the real way the world works while the rest of the American “sheeple” slumber.

Like single-issue voters, talk radio fans are able to exercise outsize influence on the political landscape by the intensity of their ideological commitment. Political scientists have long noted the way in which single-issue voters can punch above their numerical weight. An organization like the National Rifle Association, which says it has about five million members, has been able to outlobby gun control supporters despite broad (but diffuse) public backing for at least incremental gun control measures.

Talk radio listeners make up a group at least three times as large as the N.R.A. and are just as committed to a particular vision of America. To take one example, since the mid-2000s, talk radio listeners have played a big part in steering Republicans toward the virulent anti-immigration stance of Mr. Trump. Mr. Limbaugh once proposed a set of “Limbaugh Laws” requiring immigrants to speak English, barring them from holding government office or having access to government services, and excluding unskilled workers from the country.

Talk radio is not bounded by physical space. It can follow listeners wherever they go, from the car radio while commuting to the radio resting on the workbench to a radio app on a smartphone. It has the potential to dominate the construction of a person’s worldview in a way that other media simply cannot (until, perhaps, the advent of its white-collar cousin, the podcast).

This was true of conservative radio long before the current generation of talk radio hosts emerged in the 1980s. By the early 1960s, a group of AM radio broadcasters had built an informal national syndicated network of hundreds of radio stations; the largest of the broadcasters, a fundamentalist preacher in New Jersey named Carl McIntire, reached an estimated audience of 20 million listeners a week (which, for sake of comparison, is as many as Rush Limbaugh reportedly hit at his peak four decades later). Americans could tune into a station airing conservative programming all day, every day.

By 1963 President John F. Kennedy was so worried about what an aide called this “formidable force in American life today,” which was able to “harass local school boards, local librarians and local government bodies,” that he authorized targeted Internal Revenue Service audits and the use of the Federal Communications Commission’s Fairness Doctrine to silence these pesky conservative broadcasters. The result was the most successful episode of government censorship of the last half century.

Conservative broadcasters have never forgotten it, and it is a key reason that a conspiracist mind-set has such a grip on listeners. Since 2003, Rush Limbaugh, who got his start working in radio as a teenager in the mid-1960s, has mentioned the Fairness Doctrine on nearly 150 episodes. He credits the rise of talk radio to the lifting of the Fairness Doctrine in 1987 by the Reagan administration. And he worries that the left could at any moment use a revived Fairness Doctrine to silence conservative radio. As Mr. Limbaugh put it in January, “They’ve been trying to nullify or negate me” for three decades.

This suspicion that elite institutions — the media, universities, government, Big Tech — are run by hostile liberal gatekeepers seeking to silence conservative voices continues to fuel right-wing anxiety. It also helps explain conservative support for Mr. Trump, who can be accused of many things but not of failing to speak his mind. When you believe that all politicians lie but that only liberal politicians rig the game, you’re more likely to vote for someone who you think will fight back even if they lie along the way.

Take talk radio’s role in spreading Covid denialism. At each stage of the backlash against government recommendations for fighting the pandemic, talk radio hosts prepared the way for broader conservative resistance. Indeed, many of Mr. Trump’s own talking points about the virus — like comparing it to the flu and accusing China of weaponizing the virus — echoed ideas already spreading on talk radio shows.

Conservative talk radio will march to Mr. Trump’s drum, but no matter what happens in November, it will also outlast him. Talk radio emits much too powerful a signal to fade silently into the ether.

Paul Matzko, the editor for tech and innovation at Lib​er​tar​i​an​ism​.org, is the author of “The Radio Right: How a Band of Broadcasters Took On the Federal Government and Built the Modern Conservative Movement.”