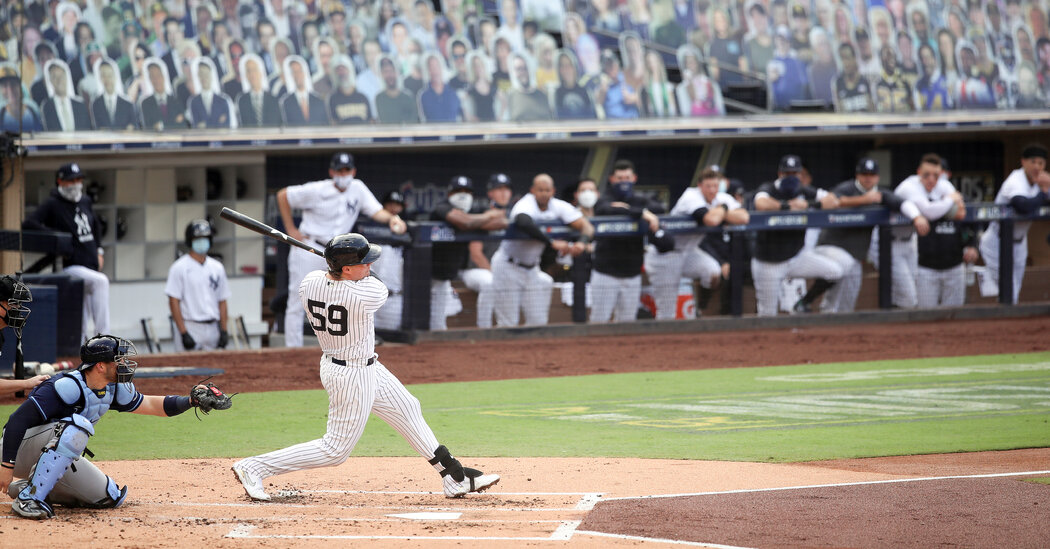 SAN DIEGO — Aaron Boone, the Yankees manager, was settling into the visiting manager’s office at Petco Park on Thursday — hours before the team’s do-or-die Game 4 in their American League division series against the Tampa Bay Rays — when pitcher Gerrit Cole walked by.

Boone said he stopped Cole, the team’s ace, and the two locked eyes. Before anything more could be said about Cole potentially starting on short rest for the first time in his career the following day, Boone said Cole declared, “Just give me the ball.”

Thanks to a 5-1 win over the top-seeded Rays later in the day, the fifth-seeded Yankees can do exactly that on Friday: They will give Cole the ball in their biggest game of the year, a Game 5 against the division-rival Rays that will determine who advances to face the reviled Houston Astros, who are making their fourth straight appearance in the A.L. Championship Series.

“You always want to be out there in the big moment,” said Cole, whom the Yankees signed to a record nine-year $324 million contract with October glory in mind. “Either team would have liked to have won this series before Game 5, but, hey, we’re here and it’s part of the path of where we ultimately want to get to.”

The Yankees pulled their season back from the brink on Thursday thanks to four stout innings from Jordan Montgomery, their fifth-best starting pitcher; five scoreless innings from their three most talented relievers, Chad Green, Zack Britton and Aroldis Chapman; and home runs from Luke Voit and Gleyber Torres.

It was the Yankees’ best all-around performance since Game 1 on Monday, when Cole guided them to a victory with six solid innings. He gets a second shot against the Rays, but this time on just three days of rest.

“If we’re going to have somebody out there, I want it to be him,” Montgomery said of Cole.

With the Rays deploying an opener, Ryan Thompson, in Game 4, the Yankees took a 2-0 lead in the second inning with a solo blast by Voit — who led the major leagues with 22 home runs during the regular season but had none in his playoff career before Thursday — and then a sacrifice fly by D.J. LeMahieu.

“We needed that fiery ‘Get the boys going’ tonight,” Voit said. “I knew I needed to step up. I had been pretty dreadful this series.”

Montgomery, who had been eagerly awaiting his first career postseason start, ran into trouble in the third and fourth innings, but escaped with only one run allowed on a groundout by Brandon Lowe with the bases loaded.

“I would have loved for 30,000 fans to be in the stands,” said Montgomery, who was making his first start since Sept. 24. “But with the season being on the line, this team has got more fight.”

The Yankees pulled away from the Rays in the sixth inning when Torres smashed a ball 410 feet into the upper deck of the Western Metal Supply Co. building that forms part of left field at Petco Park. The two-run blast from Torres, 23, gave the Yankees a 4-1 lead. The only younger Yankee to hit a home run in a postseason elimination game was Mickey Mantle, then 20, during the 1952 World Series.

Prepared to turn to the bullpen early if Montgomery was struggling, Boone pieced together the final five innings with two from Green, one and two-thirds from Britton and one and a third from Chapman. All of those relievers may be called upon again on Friday, as the Yankees hope to get 27 outs from their best pitchers with the season on the line.

“We knew this was going to be a crazy and suspenseful series,” Voit said. “We’re up for the challenge no matter what happens.”

Asked how the Yankees felt heading into Game 5, the always-blunt Voit said, “We’re going to win it.”

Boone was more understated: “To be able to hand the ball to probably the best pitcher in the game, there’s comfort in that.”

Since Game 1, Cole said, he had been preparing to start Game 5 if there was one, and didn’t need anyone to tell him to do so. But he said Boone smiled at him after Game 4 was over and told him he would officially start the next day.

The Rays will counter, at least to start, with Tyler Glasnow, who is pitching on even shorter rest than Cole after he struck out 10 Yankees over five innings in a 7-5 win in Game 2 on Tuesday.

Cole said he had talked to pitchers who had started on short rest in the playoffs in the past, like the former Yankee C.C. Sabathia and Cole’s former Astros teammate Justin Verlander. Although he made minor tweaks to his routine in the past few days, Cole said he has recovered well since Monday.

“When the light turn on, it doesn’t matter if it’s three, four, five, six or seven days,” he said. “You’ve got to do your job.”