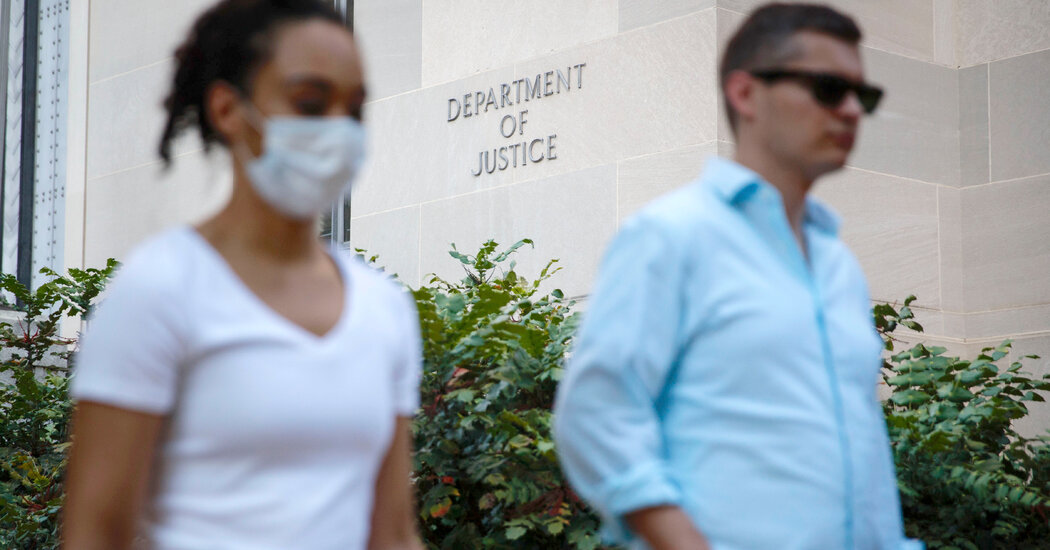 WASHINGTON — The Justice Department suspended all diversity and inclusion training for its employees and managers this week, complying with President Trump’s recent executive order to eliminate any training that suggests that implicit racial and gender biases exist in the workplace, according to a memo distributed to the department’s executive officers.

The guidance, sent on Thursday to Justice Department leaders, seemingly goes further than the president’s executive order — which pertains only to diversity training — to include work-related programs, activities and events that touch on diversity.

The memo, reviewed by The New York Times, said that managers must remove all diversity-related mandatory training requirements that have been assigned to employees from the department’s internal system, and they must suspend any related activities and events until materials can be approved by the Office of Personnel Management.

The Justice Department, which has more than 115,000 employees, did not respond to a request for comment. The guidance was earlier reported by The San Francisco Chronicle.

In the run-up to the election on Nov. 3, Mr. Trump has waged a war against education and training courses that assert that systemic racism exists and that encourage employees to be aware of it, denouncing such ideas as part of a radical liberal agenda.

Last month, he said that school curriculums that examined the way racism had shaped the United States pushed a false narrative that “America is a wicked and racist nation,” and he vowed to “restore patriotic education to our schools.”

“Our youth will be taught to love America,” the president said.

Days later, Mr. Trump signed an executive order to end the federal government’s use of traditional diversity and inclusion training, which supports the idea that people have unconscious biases around race and gender that can negatively affect how employees are treated. Such views have gained broad traction in corporate America and across the federal government, which has long offered trainings to combat such biases.

In his executive order, the president said that this idea was “rooted in the pernicious and false belief that America is an irredeemably racist and sexist country,” and that it promoted “divisive concepts,” including the idea that races were valued differently, that the United States was fundamentally racist or sexist and that individuals could unconsciously act in racist or sexist ways.

Mr. Trump’s executive order also said that no training should support the idea that a person “bears responsibility for actions committed in the past by other members of the same race or sex” or that “any individual should feel discomfort, guilt, anguish or any other form of psychological distress on account of his or her race or sex.”

After the president signed the order, the Office of Management and Budget and the Office of Personnel Management sent memos to administration officials laying out preliminary guidance for how they would carry it out.

The order immediately caused confusion at some agencies, which were not sure how best to comply. It also threw into disarray longstanding relationships with government contractors and internal federal government groups that conduct diversity trainings intended to push back on unconscious biases and promote gender and racial diversity in the workplace.

The order dovetailed with comments that Attorney General William P. Barr has made that suggest racism is not a wide-scale problem in the United States.

He has publicly said that he does not believe that systemic racism exists within law enforcement, despite a recent spate of police killings and shootings of Black people that led to months of nationwide demonstrations against racism in policing.

Last month, he criticized the Black Lives Matter movement, which has played an important role in many of the protests, accusing those aligned with the movement of using Black people as props to advance a radical political agenda.

According to the Justice Department’s memo, senior political appointees would have to approve in advance any future spending on diversity and inclusion training.

When a NYC MTA Bus Driver Told a Rider to Wear a Mask, ‘He...

How The Times Is Counting Every Coronavirus Case in the Country