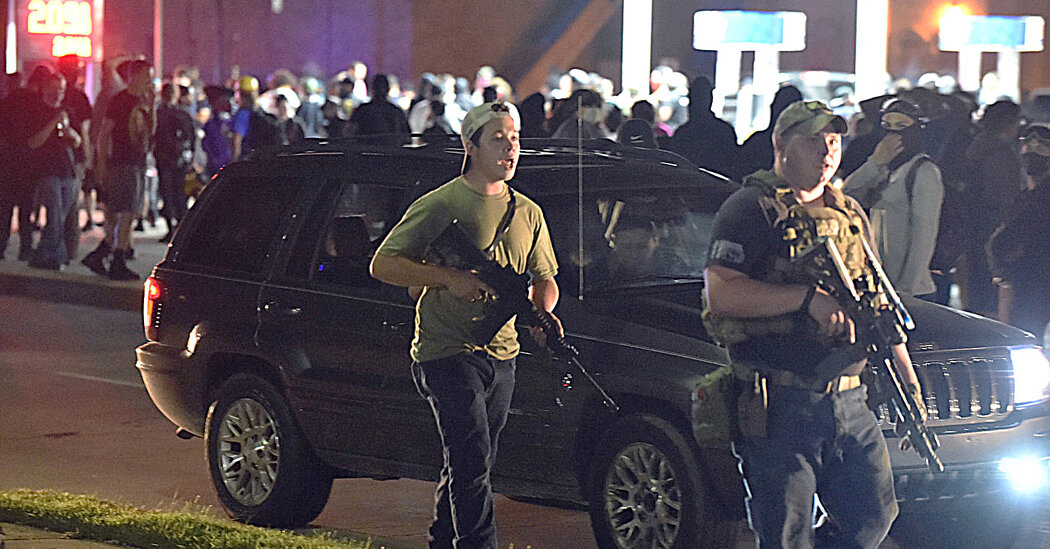 CHICAGO — Kyle Rittenhouse, a 17-year-old accused in the fatal shootings of two protesters during demonstrations in Kenosha, Wis., has become a cause célèbre for conservatives who insist he acted in self-defense. Hundreds of thousands of dollars from strangers have poured into his legal fund. And on Friday, his lawyer successfully delayed a typically routine extradition from his home state of Illinois, arguing that Mr. Rittenhouse should remain in a facility there for his own safety rather than be transferred to Wisconsin where he is to face charges in the deaths.

“There is danger to this detainee,” John M. Pierce, a lawyer for Mr. Rittenhouse, said in a court hearing on Friday, adding that the situation surrounding Mr. Rittenhouse’s prosecution had been inflamed by the presidential election.

Mr. Rittenhouse appeared on a live video stream from a juvenile detention facility in Lake County, Ill., wearing a face mask and a baggy black shirt, and staying silent during the proceedings. Judge Paul B. Novak of Lake County Circuit Court scheduled another hearing on Mr. Rittenhouse’s extradition, which his lawyer has promised to fight, for Oct. 30.

Though brief, the hearing on Friday, coupled with court filings this week, offered a glimpse into what could be Mr. Rittenhouse’s defense during a trial.

Mr. Rittenhouse has been charged with six criminal counts, including first-degree intentional homicide, for the shootings on Aug. 25 that left two protesters dead and a third injured. The shootings occurred after scuffles broke out between demonstrators, who were protesting a white police officer’s shooting of Jacob Blake, a Black Kenosha resident, and armed civilians with guns who said they had come to downtown Kenosha to protect businesses and private property after two nights of fires, looting and destruction.

In court filings, Mr. Rittenhouse’s lawyers described him as a teenager who was not part of those scuffles, but a citizen who “answered his patriotic and civic duty to serve nearby Kenosha, Wis., during a destructive insurrection.”

The court filings say that Mr. Rittenhouse was there to work as a medic, carried his own medical bag “to provide first aid and had a rifle to protect himself.”

Before Mr. Rittenhouse shot his gun, the court filing says, he was being chased into a parking lot and was “under grave risk of immediate harm.”

Video footage from that night shows that Mr. Rittenhouse was being pursued by a group of people, including one of the men he subsequently shot and killed. That man, Joseph Rosenbaum, was shirtless and, according to a criminal complaint filed in August, unarmed. After shooting Mr. Rosenbaum, the complaint said, Mr. Rittenhouse ran away and “can be heard saying on the phone, ‘I just killed somebody.’”

The sheriff of Kenosha County, David Beth, has said that though Wisconsin is an open-carry state, he did not approve of the actions of the armed men who patrolled the streets of Kenosha during the unrest.

However, the police officers and National Guardsmen who were under his command did not attempt to intervene during physical scuffles between armed men and protesters. Police officers did not appear at any point to check the identification of Mr. Rittenhouse, who as a minor was not permitted under Wisconsin law to carry a gun openly in public.

Instead, authorities in an armored vehicle that night handed water bottles to Mr. Rittenhouse and others, and thanked them for patrolling the streets.

Mr. Rittenhouse was taken into custody the day after the shootings at his home in Antioch, Ill., a town about a 30-minute drive from Kenosha.

In the weeks following his arrest, Mr. Rittenhouse has become a minor hero within the most conservative elements of the Republican Party.

Even President Trump suggested that Mr. Rittenhouse’s actions were legitimate.

“He was trying to get away from them, I guess, it looks like,” Mr. Trump said during a news conference in August. “I guess he was in very big trouble. He probably would have been killed.”

At the same time, two of Mr. Rittenhouse’s lawyers, L. Lin Wood and Lawson Pedigo, say they have raised close to $2 million for his legal defense fund. Mr. Wood, like Ms. Greene, has frequently posted slogans from QAnon, the sprawling, far-right conspiracy theories that posit the world is run by Satan-worshiping pedophiles plotting against Mr. Trump while operating a global child sex-trafficking ring.

Mr. Wood and Mr. Pedigo did not return requests for comment. Nor did officials with the Waukesha County Republican Party or Ms. Rittenhouse.

The Tahini War: The Food at the Center of an Arab Gay Rights Battle

It’s a Hellscape Out There. Try a Galette.