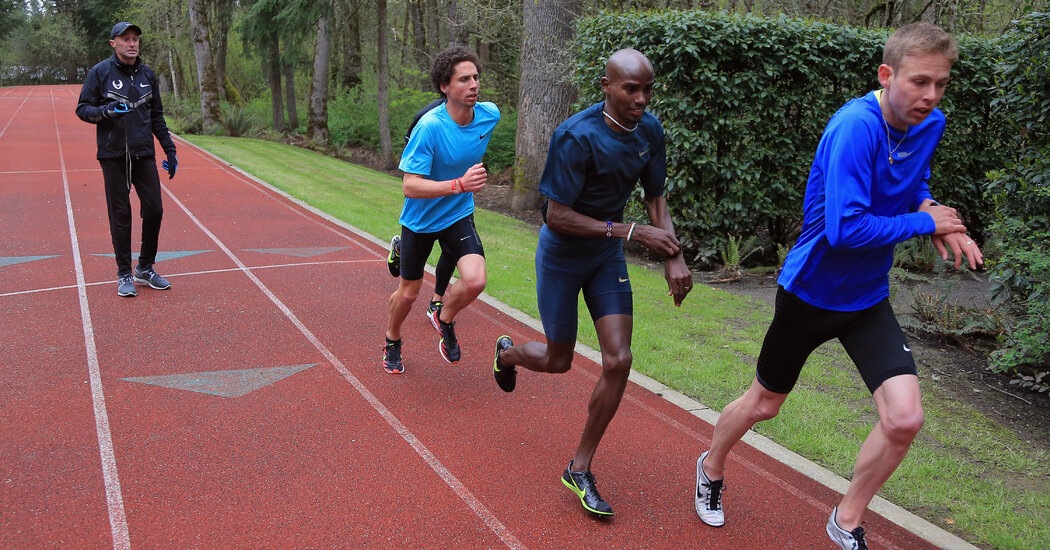 Halfway through “Win at All Costs,” Matt Hart’s look at Nike’s sponsorship of professional running, the author offhandedly throws out a number. After the salaries of the dozen or so runners in the Nike Oregon Project — some of whom earned hundreds of thousands annually — were accounted for, the program’s expenses were “north of a million dollars” a year.

Assuming that vague figure means about $1 million, it is an astonishingly small sum for a company that in 2008 (the year Hart refers to) generated $18.6 billion in revenue.

The Nike Oregon Project was a vaunted attempt at nothing less than revitalizing American distance running and earning Olympic gold medals. It was featured on magazine covers at its launch in the early 2000s and, more recently, on the front pages of newspapers after its leader, Alberto Salazar, was banned by antidoping authorities and accused of belittling and mistreating women runners. Mark Parker, who recently retired as Nike’s chief executive, was implicated as an accessory to doping after his emails with Salazar, about testing the level at which testosterone creams would trigger a positive doping test, were made public.

All for what amounted to a rounding error for one of corporate America’s titans.

For those steeped in the story of Nike, Salazar and distance running, “Win at All Costs” does not provide the hoped-for new information. It does not definitively determine whether any Nike Oregon Project runners doped, or whether Salazar pursued a systematic doping program beyond the facts laid out by the United States Antidoping Agency when it banned him from the sport in 2019. It does not reveal the name of the confidential source who provided Hart with a draft of Usada’s report in 2017, which he turned into a front-page article for The Times.

What the book does offer is an exhaustive chronicle of each major race, training camp and seemingly each training session Nike Oregon Project runners participated in for almost two decades, an exercise that left me feeling repeated sensations of déjà vu. “Win at All Costs” is not a history of Nike, but in the Oregon Project’s downfall you can see echoes of practically every scandal Nike has ever faced.

Those scandals are chronicled in many previous books about Nike, including “Swoosh,” by J.B. Strasser and Laurie Becklund; “Bowerman and the Men of Oregon,” by Kenny Moore; “No Logo,” by Naomi Klein; “Cycle of Lies,” by Juliet Macur; “Out of Nowhere,” by Geoff Hollister; and “Shoe Dog,” by Phil Knight, one of Nike’s founders.

The Oregon Project wasn’t Nike’s first attempt at a professional running club. In the 1970s and 1980s it sponsored Athletics West — its name was in pointed contrast with the Soviet running programs in the East. Salazar ran for a time for Athletics West, which was run by Harry Johnson, a high school track and field coach with little experience coaching professionals.

There was also the doping. In “Swoosh,” published in 1993, Strasser and Becklund write that they saw the minutes for a 1979 Nike management meeting that mentions a Nike employee, Dick Brown, studying steroids. One Athletics West team member, Rob Tabb, told Hart he was offered steroids by Brown personally, and that he knew that team members were engaged in blood doping.

The first major news story about what was really going on in the Nike Oregon Project was written in 2015, but it took until 2019 and Salazar’s formal suspension for Nike to do anything about it. It was reminiscent of the company’s dealings with Lance Armstrong, ignoring the years of allegations and steadily mounting evidence that he had doped throughout his Tour de France victories, only dumping Armstrong after Usada released a report about it.

Nike and Salazar’s mistreatment of women is covered heavily in “Win at All Costs.” Kara Goucher, one of the Oregon Project’s most successful runners, had her salary reduced by tens of thousands of dollars after she became pregnant. A clause in her contract, and practically all Nike running contracts, allowed the company to reduce her salary if she didn’t compete in a sanctioned race for 120 days, a near impossibility while having a child.

Goucher went above Salazar’s head to fight the reductions, and last year, after a number of current and former Nike athletes detailed the policies publicly, Nike finally committed to end financial penalties for pregnant athletes. By then the company had something of a reputation for discrimination — in 2018, female employees recounted other instances of mistreatment that had resulted in over a dozen workers being let go — in keeping with a culture of machismo that goes back to the company’s very founding.

Bill Bowerman, the University of Oregon track and field coach who along with a former runner, Phil Knight, founded Blue Ribbon Sports, which would become Nike, was well known for urinating on the legs of his runners while they were soaping up in the shower. According to Moore (another of his former runners) in “Bowerman and the Men of Oregon,” Knight fell for this prank three times. A week after Blue Ribbon Sports was founded, Knight wrote Bowerman to renegotiate. “PS. I forgot to make it part of the original agreement, but I think it ought to be made explicit: There will be no pissing on partners in the shower,” Knight wrote.

Nike’s regular company retreats were known as the “Buttface,” after an incident that Knight recounts in “Shoe Dog”: At one early retreat, an employee got a laugh by muttering “How many multimillion-dollar companies can you yell out, ‘Hey, Buttface,’ and the entire management team turns around?” It is perhaps unsurprising, then, that a company founded on these rituals would go on to mistreat women employees and runners.

There is the veneer of change at Nike. While Salazar is still an employee, and the company is financing his appeal of his doping suspension, it has shut down the Oregon Project. Parker, the chief executive who followed along with Salazar’s testosterone experiments, has retired. So has John Capriotti, the longtime head of Nike’s track and field marketing group, who was accused in 2015 of threatening to kill a former Nike Oregon Project coach at a track meet. Nike says neither retirement is related to Salazar or the Oregon Project.

Then again, perhaps things are as they always have been. The Nike ur-scandal was its use of sweatshop labor and child labor in Asia, which dogged the company throughout the 1990s and early 2000s. That scandal, in part, launched the careers of Klein, who covered it in “No Logo,” and Jonah Peretti, who before cofounding HuffPost and BuzzFeed went early internet viral because of an email exchange with Nike.

Nike began auditing its factories, publishing reports on the working conditions inside and raising the wages for some workers. Whether because conditions were dramatically improved, or because the public moved on, two decades later Nike was the subject of favorable articles with titles like “How Nike Shed Its Sweatshop Image to Dominate the Shoe Industry.”

Earlier this year, however, it was reported that some workers at Chinese factories that make Nike products were Uighurs, a mostly Muslim ethnic group in western China who have been detained by the government in vast numbers. Nike has said it is “concerned about reports of forced labor” and is “conducting ongoing diligence with our suppliers in China.”

Whether it is the treatment of labor, the treatment of women or a win-at-all-costs mentality that leads to a doping scandal seemingly each decade, Nike’s problems never really go away. They just metastasize into similar but related problems, or lie dormant, waiting to rise again.

Meanwhile, the value of Nike’s stock surged 10 percent last month after the company reported better than expected first-quarter numbers, and it said it expects to be one of the rare companies to achieve revenue growth even amid a historic pandemic.

Nike making money and having an ever-increasing stock price. That also never goes away.

Scenes From the 2020 Sturgis Rally, Undaunted by the Coronavirus