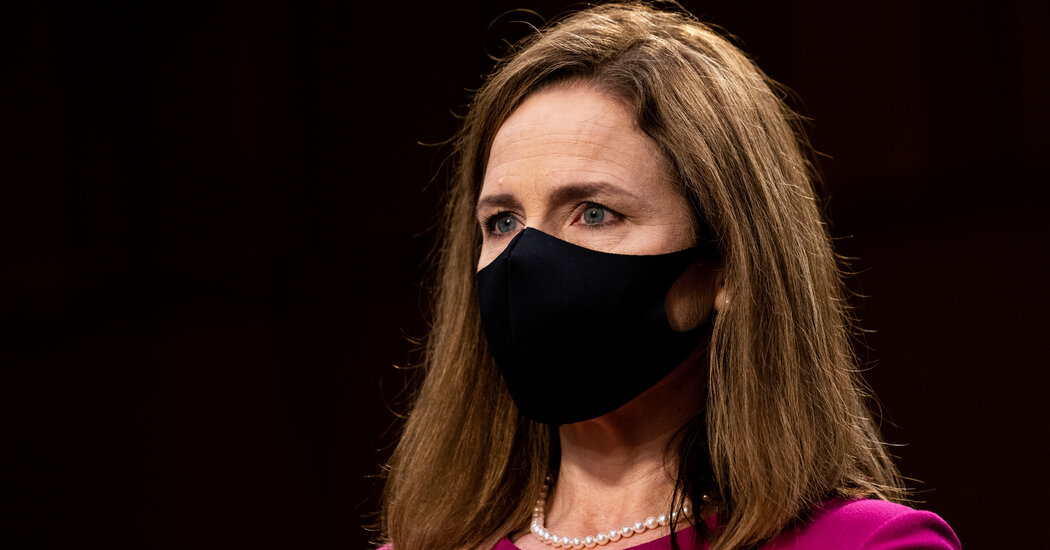 As Republican senators rush to confirm President Trump’s replacement for Ruth Bader Ginsburg, I condemn them for their hypocrisy (not giving Merrick Garland a hearing) and their ruinous and out-of-touch compulsion to overturn the Affordable Care Act and Roe v. Wade. They know that Mr. Trump might lose the election, and they want to ensure a solid conservative majority on the Supreme Court.

Despite the pandemic, Mr. Trump and Republican leaders are determined to eliminate the Affordable Care Act and throw millions of Americans off health insurance at a time when they most need it. A majority of Americans favors the A.C.A., as well as a woman’s right to choose. Why throw millions under the Covid-19 bus? Why turn back the clock after 50 years of pro-choice?

Based on her speeches and writings, Amy Coney Barrett is a right-wing zealot who does not belong on the Supreme Court.

Barbara Solomon
Corte Madera, Calif.
The writer worked as a research attorney at the California Supreme Court and a deputy city attorney for San Francisco.

After listening to the Democrats’ talking points over the weekend, I think that it is clear that their intent is to try to “Bork” Judge Amy Coney Barrett for her earlier academic writings to defeat her nomination to the Supreme Court without regard to her three-year history as an appellate court judge. Joe Biden similarly helped defeat the nomination of Judge Robert Bork to the Supreme Court in the 1980s, and it was as shameful then as now.

Like Judge Bork, Judge Barrett is a brilliant jurist and has been an excellent appellate court judge. There is nothing in her life as a human or a jurist that should prevent her nomination and ascent to be a Supreme Court justice.

I am certain you will be confirmed, and I will not debate the legal rules regarding the process, despite the questionable moral and ethical grounds for your nomination. Rather I would like to offer a few thoughts as a concerned American.

I would urge you to remember that you stand on the shoulders of Sandra Day O’Connor and Ruth Bader Ginsburg. Please think about their legacy, not just that of Antonin Scalia, when forming opinions and voting. I hope you evolve more in their image rather than his.

It may be likely that we are placing in your hands our fragile democracy in the event of an electoral crisis. Please remember that your obligation is to the U.S. Constitution and to stand for democracy vs. any loyalty to party or person. I hope you realize that to act differently would have long-term ramifications for our country.

Finally, I would urge you not to pull up the ladder behind you as a woman or an American when facing decisions on women’s rights, the right to health care or immigration. You have indicated your strong Catholic faith. I only hope that you express that faith with a Christian commitment to the well-being and beliefs of all.

Re “Leave Judge Barrett’s Faith Out of This,” by Meir Soloveichik (Op-Ed, nytimes.com, Oct. 11):

It is one thing to practice a religion; for that the First Amendment is sufficient protection. It is quite another to impose your religion on another, particularly in the guise of a judicial ruling. That is the reason to question Judge Amy Coney Barrett closely on her willingness to separate her beliefs from her possible rulings.

Should she be confirmed, she will be in a position to impose those beliefs on those who do not share them. It will take a subtle questioner to get her to reveal the truth on this matter, but it must be done.

Golden State Killer Sentenced to Life in Prison Without Parole