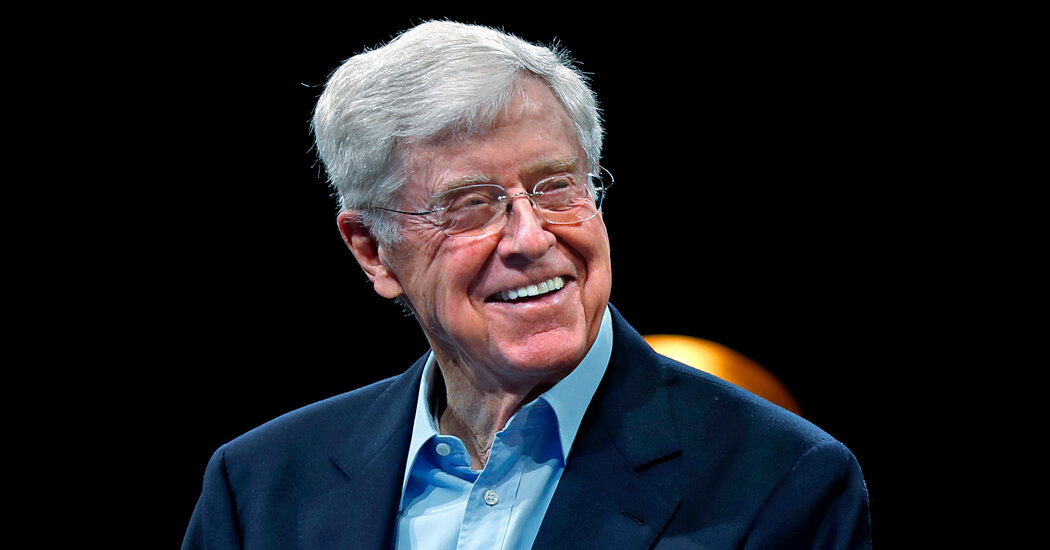 Since the early 1970s, Mr. Koch has sought to dismantle most federal regulatory institutions, and the federal courts have been central to that battle. In 1974, Mr. Koch gave a blistering speech to a libertarian think tank, called the Institute for Humane Studies, in which he outlined his vision of the American regulatory state, and the strategy he would employ over the ensuing decades to realize that vision. On the list of government interventions he condemned were “confiscatory taxation, wage and price controls, commodity allocations programs, trade barriers, restrictions on foreign investments, so-called equal opportunity requirements, safety and health regulations, land use controls, licensing laws, outright government ownership of businesses and industries.” As if that list were not exhaustive enough, he added “… and many more interventions.” In short, Charles Koch believes that an unregulated free market is the only sustainable structure for human society.

To achieve his goal, Mr. Koch has built an influence network with three arms: a phalanx of lobbyists; a constellation of think tanks and university programs; and Americans For Prosperity, a grass-roots army of political activists. And shaping the U.S. judiciary has been part of Mr. Koch’s strategy from the beginning. In that 1974 speech, he recommended strategy of “strategically planned litigation” to test the regulatory authority of government agencies. Such lawsuits could make their way to the Supreme Court, where justices could set precedent. In the 1990s, he focused on lower-level judges, funding a legal institute that paid for judges to attend junkets at a Utah ski resort and Florida beachfront properties; the judges attended seminars on the importance of market forces in society and were warned against consideration of “junk science” — like specific methods to measure the effects of pollution — that plaintiffs used to prove corporate malfeasance.

Mr. Koch also sought to influence the judiciary at the federal level. Between 1997 and 2017, the Koch brothers gave more than $6 million to the Federalist Society, a nonprofit institute that recruits libertarian and conservative judges for the federal judiciary, according to a tally by the activist group Greenpeace.

Mr. Koch’s efforts on the Supreme Court intensified after Donald Trump’s election, when a Republican-controlled Senate opened the way to install judges who could tip the court’s ideological balance. Americans for Prosperity undertook national campaigns to support President Trump’s previous Supreme Court nominees, Neil Gorsuch and Brett Kavanaugh. A.F.P. said the Kavanaugh campaign alone — fliers, digital ads and staff for phone banking and door knocking — ran into “seven figures.” Now, Americans for Prosperity is doing the same for Judge Barrett. A.F.P. activists are pressuring U.S. senators in several states, with a particular eye toward vulnerable Democrats like West Virginia’s Joe Manchin. The group is also working in Alaska, where Republican Lisa Murkowski has given mixed signals about whether she is willing to vote on Judge Barrett’s nomination before the next president is elected.

Mr. Koch is selective about where he spends on politics, and the returns to reshaping the Supreme Court could dwarf the millions he’s invested. The court plays a pivotal role in determining how much regulatory power the federal government has over corporate America. The closest the Supreme Court has come to reflecting Koch’s vision for regulation is the so-called “Lochner era” of the early 20th century, during which an activist court struck down a wide-range of federal regulations on business, turning the country into a free market free-fire zone.

A Supreme Court that has swung hard to the right could reverse earlier decisions and issue new ones that create something like a new Lochner era. In the world of corporate law, the lodestar legal case is Chevron U.S.A. Inc. v. Natural Resources Defense Council. This case, decided in 1984, created an important legal precedent called “Chevron deference.” It holds that courts should generally defer to an agency’s interpretation of a law enacted by Congress when the law is ambiguous (provided that the agency interpretation is reasonable). This helps empower agencies like the Environmental Protection Agency to operate complex regulatory regimes, even if some details are not specifically detailed in the law. The current Supreme Court has signaled a willingness to reconsider this precedent, a move that could dramatically weaken federal regulatory agencies.

Mr. Koch and the Trump administration are united in their desire to undo the Chevron decision. Mark Holden, Koch Industries’ general counsel and a board member of Americans for Prosperity, has publicly decried Chevron deference as a tool of tyranny. “The administrative state is often fundamentally at odds with our carefully crafted constitutional order,” Mr. Holden wrote in a 2018 op-ed for The Hill. He said the legal precedent gave agencies like E.P.A. so much power that they consolidated the authority of all three branches of government under one roof: Passing rules, enforcing them and then handing down verdicts in administrative courts. At the White House, a former White House counsel, Donald F. McGahn II, said the Trump administration sought to appoint Supreme Court justices who would rein in the independent agencies. Justice Gorsuch, for example, wrote multiple appeals court opinions that echoed Mr. Holden’s views.

The Koch network apparently has faith that Judge Barrett will rule in concert with these beliefs. This is something of a gamble. She has been a federal judge for only three years, leaving a short paper trail of cases and academic work from which to deduce her views. Judge Barrett’s legal writings do point toward one important idea: She, like many judges, appears to believe that some precedents which the court has created with its decisions should be overturned. Barrett has publicly said that her judicial philosophy is the same as former Justice Antonin Scalia. As Lisa Heinzerling, a law professor at Georgetown, told The Washington Post, what this signals depends on which version of Justice Scalia Judge Barrett agrees with. Justice Scalia was a supporter of Chevron deference early in his tenure, but became more skeptical of it over time as he defended the power of courts to undo or weaken acts of Congress.

The Americans for Prosperity campaign literature supporting Judge Barrett does not appear to mention the Chevron case, nor any other ruling about corporate power. One Facebook ad simply says that she is “committed to our Constitution, and that she won’t legislate from the bench.” Spokesmen for A.F.P. echo that line, emphasizing that the Koch network isn’t looking for policy outcomes, but for honest jurists who will follow the Constitution to the letter.

History shows that it is just as effective to legislate from the bench by striking down laws as by upholding them. The Lochner era proves that policy negation is just as powerful as creation, and it affects just as many lives. As Charles Koch has written and stated so often in the past five decades, there are many, many laws and programs that he would like to negate. With the appointment of Judge Barrett to the court, he appears to be closer than ever to achieving this goal.

Christopher Leonard (@CLeonardNews) is the author of “Kochland: The Secret History of Koch Industries and Corporate Power in America,” and director of the Watchdog Writers Group at the Missouri School of Journalism.

I’ve Seen a Future Without Cars, and It’s Amazing