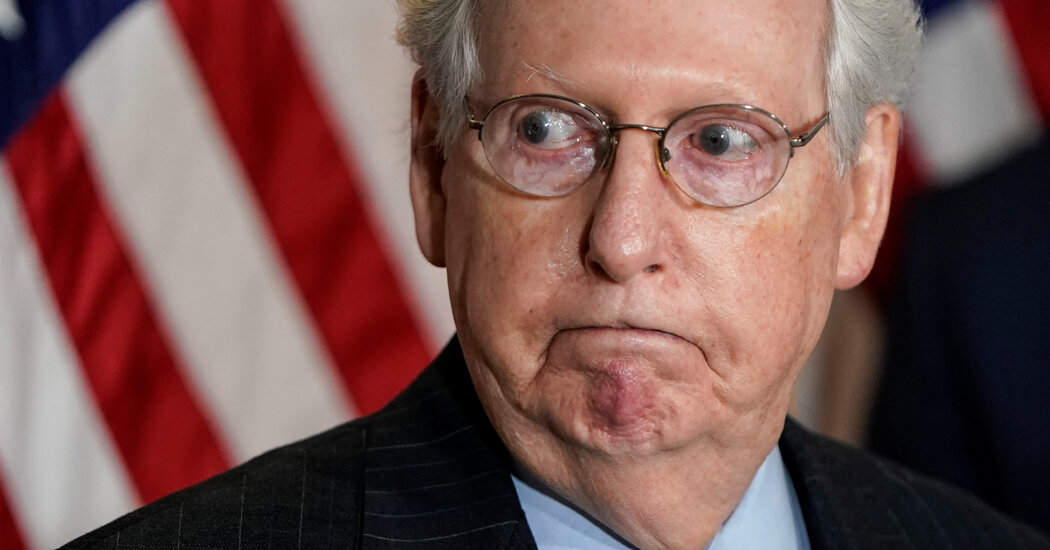 I keep seeing news reports saying that the Trump administration is “pivoting” on economic stimulus. But Donald Trump has been reversing positions so frequently that it looks less like a series of pivots than like a tailspin.

It would be funny if the human consequences weren’t so terrible. At this point the best guess is that for the next three-plus months — that is, until President Joe Biden takes office (highly likely, though not certain) with a Democratic Senate (more likely than not, but definitely not a sure thing) — there will be little or no aid for the millions of families, thousands of businesses and many state and local governments on the brink of disaster.

But why isn’t America getting the pandemic relief it so obviously needs?

It’s easy to blame Trump, who has managed to spend four years in office without learning anything about policy and has surrounded himself with officials chosen for slavish personal loyalty rather than expertise. As a recent article in Politico put it: “Never mind the A Team. At this point, even the B Team would represent a significant upgrade.”

But even if Trump had any idea what he was doing, he would be paralyzed by the opposition of many, probably most Senate Republicans to any serious deal. They’re willing to cover for Trump’s unprecedented corruption; they’re apparently unbothered by his fondness for foreign dictators. But spending money to help Americans in distress? That’s where they draw the line.

This was obvious even before the coronavirus struck. Remember how Trump promised to spend trillions on infrastructure, then defaulted on that promise? “Infrastructure week” eventually became a running joke. But while Trump’s infrastructure proposals never made any sense, in early 2019 it seemed as if he might actually have a deal with Democrats for a serious spending plan.

But the deal went nowhere thanks to opposition from Senate Republicans, including Mitch McConnell, the majority leader.

McConnell and company are also the main reason we don’t have a deal to help Americans survive the economic effects of the pandemic.

We should have had a deal in the summer, when it was already obvious that the rescue package approved in March was going to expire much too soon. But Senate Republicans were adamantly opposed to providing the necessary aid. Lindsey Graham declared that emergency unemployment benefits would be extended “over our dead bodies” (actually 215,000 other people’s dead bodies, but who’s counting?).

And McConnell — whose state benefits from far more federal spending than it pays in taxes — derided proposed aid to states as a “blue state bailout.”

The thing is, Trump’s chances of re-election and McConnell’s chances of holding on to the Senate would almost surely be better if there actually had been an infrastructure bill last year and a relief bill this past summer. Why weren’t Republicans willing to make those deals?

Whatever they may say, they weren’t concerned about the cost. Republicans didn’t worry about budget deficits when they rammed through a $2 trillion tax cut for corporations and the wealthy. They only pose as deficit hawks when trying to block spending that might help ordinary Americans.

No, what this is really about is the modern G.O.P.’s plutocratic agenda. McConnell and, as far as I can tell, every member of his caucus are completely committed to cutting taxes on the rich and aid to the poor and middle class. Other than March’s CARES Act, which Republicans passed only because they were panicking over a plunging stock market, it’s hard to think of any major G.O.P.-approved fiscal legislation in the past two decades that didn’t redistribute income upward.

You might think that Republicans would set the plutocratic imperative aside when the case for more government spending is compelling, whether it’s to repair our crumbling infrastructure or to provide relief during a pandemic. But all indications are that they believe — probably rightly — that successful government programs make the public more receptive to proposals for additional programs.

That’s why the G.O.P. has tried so frantically to overturn the Affordable Care Act; at this point it’s clear that Obamacare’s success in cutting the number of uninsured Americans has created an appetite for further health care reform.

And that’s why Republicans are unwilling to provide desperately needed aid to economic victims of the pandemic. They aren’t worried that a relief package would fail; they’re worried that it might succeed, showing that sometimes more government spending is a good thing. Indeed, a successful relief package might pave the way for Democratic proposals that would, among other things, drastically reduce child poverty.

So while Trump bears much of the responsibility for the misery facing millions of Americans, McConnell probably bears an equal share. Will they pay the political price? We’ll find out in three weeks.

Making Financial Decisions When You Don’t Have All the Facts

Trying to Keep It Together in Zoom School

A federal judge blocked the Trump administration from ending the census early.