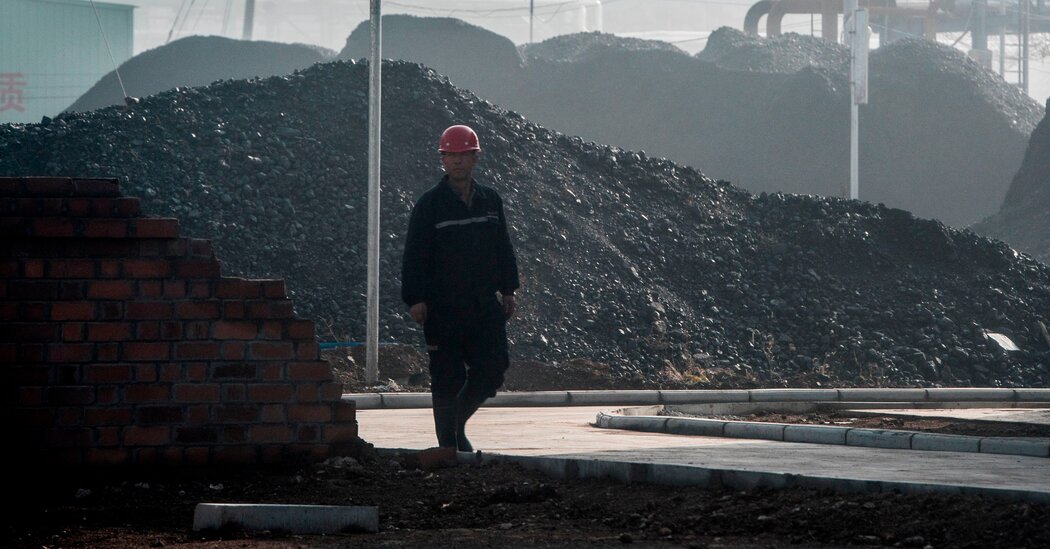 According to a briefing paper by the Center for Research on Energy and Clean Air from June, China had more coal-fired capacity under construction or in planning at the time (249.6 gigawatts) than the existing capacity of either the United States or India.

Now, too, the Chinese government’s rush to stimulate an economic recovery after the Covid-19 pandemic gives officials at all levels reason to “go all out to make up for the loss,” as the deputy governor of the northwestern province of Gansu, Li Peixing, urged this summer.

More construction permits reportedly were issued for coal-fired power plants in China in the first half of this year than in 2018 or 2019. By May, the concentrations of four air pollutants exceeded levels recorded a year earlier, according to the Finland-based Center for Research on Energy and Clean Air.

Mr. Xi’s recent vow to make China carbon neutral by 2060 might be inspired by the environmental version of the Kuznets curve hypothesis: Growth might increase pollution and environmental degradation at early stages of economic development but will eventually decrease them, when incomes are high. For the theory to pan out with China, however, Beijing would have to shift growth models, and move away from its reliance on heavy industry as the engine of growth and from its dependence on coal.

It doesn’t seem inclined to, and Washington doesn’t have much standing when it comes to holding Beijing to account for its environmental record.

The problem predates the Trump administration. While I was conducting fieldwork in the northern province of Shanxi several years ago, a local official told me that, considering how much better China’s environmental record was than India’s, foreign governments’ loud demands that China curb pollution must be a plot to contain the country’s rise.

Since then, Mr. Trump’s move to pull the United States out of the 2015 Paris climate accord — under which the Obama administration had committed to reducing America’s emissions and to contributing $3 billion to the Green Climate Fund — has further undermined, predictably, Washington’s credibility on environmental issues. The same goes for the Trump administration’s repeated rollbacks on domestic environmental regulations: undoing the Clean Power Plan, promising to revitalize the coal industry, easing restrictions on oil and gas drilling, and moving to lift limits on chemicals that can be used near streams and wetlands.

Beijing, facing what it considers to be an increasingly hostile international context, is trying to make the Chinese economy more self-reliant. Even liberal-minded Chinese leaders, such as Vice Premier Liu He — Mr. Xi’s top economic adviser and his point person for trade negotiations with the United States — is promoting a strategy of so-called >,” title rel=”noopener noreferrer” target=”_blank”>dual circulation, which prioritizes “domestic circulation,” or the development of domestic consumption and markets, partly to reduce China’s dependence on foreign trade.

As China moves to become more self-sufficient economically, Washington’s leverage over the country’s development and environmental standards is likely to decline.

For years, many Chinese people looked at U.S. diplomatic missions in China as the only reliable source for air-quality data. In late July, amid a rapid downward spiral in U.S.-China relations, the U.S. consulate in the southwestern city of Chengdu was closed. A month later, an American journalist tweeted, “Joke among Chengdu friends is how much better the air quality has become since the U.S. consulate closed”— at least going by air-quality data provided by the Chinese government.

Environmental degradation in China is bad for the United States, too.

Air pollution from Asia has been the cause at times of as much as 65 percent of the increase in ozone levels in some parts of America. A 2014 study of 2006 data for air pollution in China found that when strong winds blew across the Pacific Ocean, pollutants produced by China’s export industries accounted for, at worst, 4 percent to 6 percent of the carbon monoxide recorded in the Western United States, up to 11 percent of the black carbon pollution and 12 percent to 24 percent of sulfate concentrations. NASA physicists have said that air pollutants from China and other Asian countries may “contribute to colder and snowier winters in the United States.”

Yet Washington’s attempt to decouple the U.S. and Chinese economies will only make matters worse. In his agenda for a second term in office, Mr. Trump vows to deny federal contracts to companies that outsource activities to China, while offering major deductions to companies in essential industries, like pharmaceutics and robotics, that bring back their manufacturing to the United States. If that shift happens, though, the production of pollutants that Washington had essentially exported to China along with its outsourcing could return to America.

In 2010, China’s export sector accounted for 1.8 million tons of the fine particulate matter known as PM2.5 in China’s air, with 60 percent of these emissions attributed to the production of exports for the United States and other countries of the Organization for Economic Cooperation and Development. More recent analyses, or even data, are hard to come by, but a study from May published in Nature Communications found that in 2012, “14.6 percent of China’s industrial-related CO2 emissions were driven by foreign final consumption,” with the United States, Hong Kong and Japan being “the top three regions with the largest carbon footprints in China.”

President Trump likes to cast U.S.-China relations as a zero-sum game: During the 2015 presidential campaign he said, “I beat the people from China. I win against China. You can win against China if you’re smart.” But when it comes to environmental protection, decoupling is a lose-lose proposition for both countries.

Yanzhong Huang, a senior fellow for global health at the Council on Foreign Relations and a professor at Seton Hall University’s School of Diplomacy and International Relations, is the author of “Toxic Politics: China’s Environmental Health Crisis and its Challenge to the Chinese State.”

Trump again tramples on his own message, as Biden courts older voters in Florida.

Encounter breaks out between security forces, terrorists in Jammu and Kashmir`s Anantnag