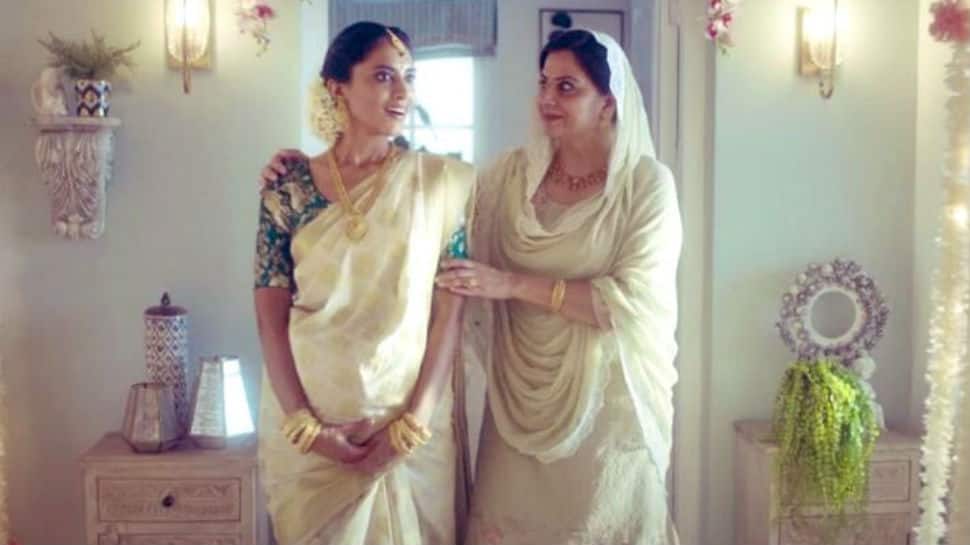 Tanishq on Tuesday asserted that it was “deeply saddened with the inadvertent stirring of emotions” after an ad of the jewellery brand on interfaith love triggered a furious backlash, prompting the company to withdraw the film. On social media, some accused the jewellery brand of promoting “love jihad”.

Responding to the row that erupted over the ad, Tanishq clarified that the idea behind the Ekatvam campaign “is to celebrate the coming together of people from different walks of life, local communities and families during these challenging times and celebrate the beauty of oneness”. It added that the film has stimulated divergent and severe reactions, “contrary to its very objective”.

“We are deeply saddened with the inadvertent stirring of emotions and withdraw this film keeping in mind the hurt sentiments and well being of our employees, partners and store staff,” a statement read.

The company’s move prompted intense debate on social media and elsewhere, just as the ad to promote its jewellery collection Ekatvam (oneness) had deepened societal faultlines since its release last week.

The 43-second commercial, which led to the hashtag #BoycottTanishq trending on Twitter, shows a pregnant woman being led to her bridal shower, a Hindu custom called ‘godh bharai’, by a woman who viewers later realise is her mother-in-law. The young woman, in a sari and bindi, addresses the older one, in a salwar kurta and a dupatta covering her head, as ‘Ma’ and asks, “But you don’t celebrate this custom?”
The mother responds gently, “The tradition of keeping daughters happy is there in every home. Setting the scene of a composite family, a woman in a hijab, people in saris and a man in a skullcap can be seen in the backdrop.”

The description of the video on YouTube read: She is married into a family that loves her like their own child. Only for her, they go out of their way to celebrate an occasion that they usually don’t. A beautiful confluence of two different religions, traditions, cultures.”

The commercial opened the floodgates of debate and trolling with a flurry of tweets, some angry and threatening, demanding a ban on the advertisement and a boycott of the brand, a Tata product. Tanishq first disabled comments and likes/dislikes on its ad on YouTube, and on Tuesday withdrew the video altogether.

The removal of the ad led to a fresh debate with several people, including Congress MP Shashi Tharoor, writer Chetan Bhagat and actor Swara Bhasker calling out the trolls.

His party colleague Abhishek Singhvi joined him. “Those boycotting the Tanishq ad don’t like seeing daughter in law(s) happy around mother in law’s. You have seen too many soaps & too much prime times news,” tweeted Singhvi.

‘Two States’ author Bhagat said the company should not get bullied. “As a TATA group company, expected Tanishq to be fairer and braver. If you have done nothing wrong, if you have shown something beautiful about our country, don’t get bullied. Be Indian. Be strong,” he said.

Actor Swara Bhasker put out a caustic tweet saying, “Such a large company, such a weak spine?”

“TBH, reacting to paid twitter trends and manufactured outrage is just myopic. The ad was lovely. Standing by it would have made ’em cooler, foresighted and balsy. But alas #tanishq,” added her colleague Richa Chadha.

Blogger and writer Richa Singh came out in the company’s support, saying those preaching that Tanishq should not have withdrawn the ad obviously don’t own jewellery shops. “In a hooligan environment like the present, they will first protect their employees’ and business interest and then think about your inquilab. So please, drop it,” she tweeted.

The polarisation was evident right since October 9 when the ad was first released with many people slamming Tanishq for projecting fictional interfaith union and promoting ‘love jihad’, a term refers to an alleged campaign by Muslims to convert Hindu girls in the guise of love. And many others lauding it for showing a syncretic, harmonious India.

“Tanishq jewellery’s ‘Ekatvam’ series’ ad projects a fictional ‘interfaith’ union, a Muslim family, a Hindu daughter-in-law being allowed to do a Hindu ritual. Nothing but the promotion of love jihad? #BoycottTanishq,” tweeted former IAS officer and author Sanjay Dixit.

BJP leader and former MP Geetha Kothapalli described the ad as bizarre, highly objectionable and normalising #LoveJihad. “I want to know who directed this Ad and who wrote? Pull this AD down #BoycottTanishq,” she said on Twitter.

As the clamour for the boycott of Tanishq grew, there were many who came out in its support. Many kudos came its way for “not shying away from addressing one of the biggest divides” in the nation.

It is not the first time that Tanishq has broken the stereotype and challenged societal norms with its ad. In 2013, it promoted remarriage in an ad made by Lowe Lintas. However, back then the commercial didn’t attract any controversy and was widely appreciated.

In 2019, Surf Excel was severely criticised for an ad showing Hindu-Muslim unity. The detergent brand, known for its tagline ‘daag acche hai’, was subjected to the ‘#Boycott Surf Excel’ trend on Twitter. Its Holi ad featured two children, a Hindu girl and a Muslim boy. The girl dressed in white is seen riding a bicycle and challenging neighbourhood kids to splash colour on her. It is later revealed that she did so to protect her Muslim friend who had to go to the mosque for prayers.

95% of Delhi air pollution due to local factors, share of stubble burning only...

Unlock 4: Schools in Gujarat to reopen from September 21, here`s what Education Minister...

‘Stanley Kubrick,’ a Brisk New Biography of a Major Talent