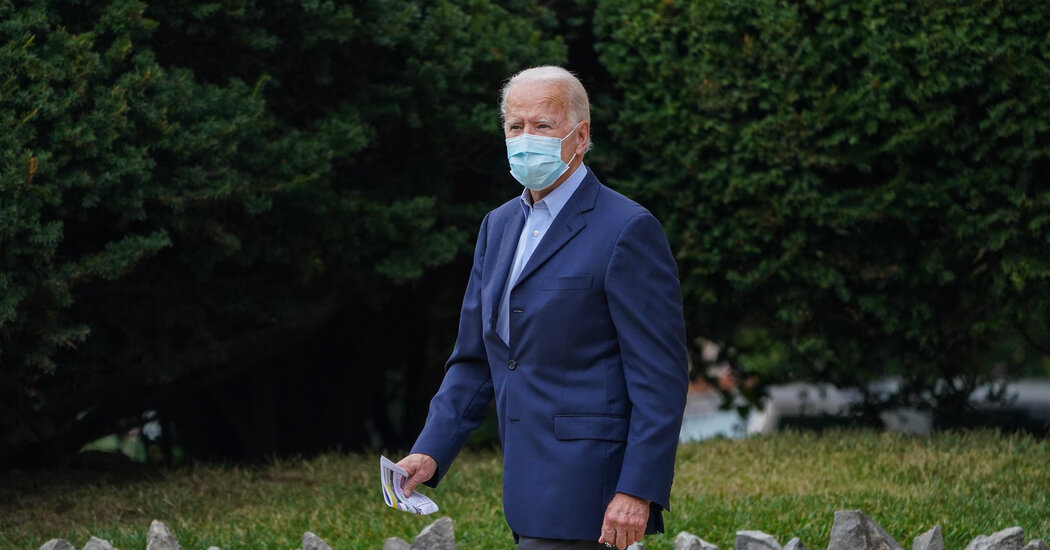 The Biden campaign on Wednesday rejected a New York Post report that Joseph R. Biden Jr. had met with an adviser to the Ukrainian energy company associated with his son Hunter Biden, a claim based on material provided by Republican allies of President Trump who have tried for months to tarnish Mr. Biden over his son.

In a statement, a spokesman for the Biden campaign, Andrew Bates, said that Mr. Biden’s official schedules showed no meeting between Mr. Biden and an adviser to the board of the Ukrainian energy company Burisma, on which Hunter Biden served. The Post story cited an email allegedly sent from that adviser, Vadym Pozharskyi, to Hunter Biden, thanking him for “giving an opportunity to meet your father” and to spend “some time together.”

“We have reviewed Joe Biden’s official schedules from the time and no meeting, as alleged by the New York Post, ever took place,” Mr. Bates said.

The authenticity of the email correspondence cited by The Post could not be independently verified.

Hunter Biden’s overseas business dealings have been a subject of intense Republican focus over the last year, including his ties to a Ukrainian company while Mr. Biden, as vice president, worked on Ukraine policy. Both Bidens have said that the two did not discuss Ukraine with each other. An investigation by Senate Republicans — and significant scrutiny of the issue over the last year — have found no evidence that Mr. Biden, the former vice president, engaged in wrongdoing over his son’s business dealings.

Facebook said on Wednesday that it had decided to limit the distribution of the story on its platform, saying that it invited additional fact-checking. A Twitter spokesman, citing its “hacked materials policy’’ also said the service would block links to the story and images of it from being posted on its platform.

But the Trump campaign and its Republican allies have been eager to promote it. Mr. Trump, who trails Mr. Biden in many key battleground states with just three weeks to go until Election Day, has struggled for months to negatively define Mr. Biden. The president has careened from baseless attacks on Mr. Biden’s mental acuity to casting him as an enemy of law enforcement personnel and even of the suburbs.

The president’s criticisms of Hunter Biden have been a constant throughout the election cycle, and Mr. Trump’s debate-stage attack last month on the younger Mr. Biden’s struggles with addiction was one of the most viciously personal of the campaign.

The Post report described a circuitous and unusual path by which the newspaper had obtained the email correspondence that involved two of Mr. Trump’s staunchest allies: Rudolph W. Giuliani, the president’s personal lawyer and a former New York City mayor, and Stephen K. Bannon, a former White House adviser.

The article said the emails were part of a trove of material on a laptop computer that was dropped off for repairs at a shop in Delaware, Mr. Biden’s home state, and never retrieved. It said the store owner had made a copy of the correspondence and provided it to the lawyer for Mr. Giuliani.

Mr. Bannon, who was arrested in August and charged with fraud, informed the Post about the hard drive, and on Sunday Mr. Giuliani provided a copy to the Post, the article said.

Mr. Bates, the Biden spokesman, said The Post had not asked the Biden campaign about “critical elements of this story.”

“They certainly never raised that Rudy Giuliani — whose discredited conspiracy theories and alliance with figures connected to Russian intelligence have been widely reported — claimed to have such materials,” he said in his statement.

The report raises a host of unanswered questions, beginning with whether the email alluding to a meeting is real, and if it is, what Mr. Pozharskyi was specifically referring to when he allegedly thanked Hunter Biden for the “opportunity” to meet and spend time with his father.

It is also unclear who dropped off the laptop at the repair shop, who the shop owner is or why that person — according to The Post — alerted the federal authorities to the existence of the computer. The report that the Federal Bureau of Investigation seized the computer and the hard drive in December but does not specify what the authorities might be investigating.

The article also does not explain any connection between the store owner and Mr. Giuliani’s lawyer, Robert Costello, or why the owner would give a copy of the hard drive to him.

Mr. Trump was impeached in December on charges of abuse of power and obstruction of Congress, accusations centered around his efforts to pressure Ukraine to investigate Mr. Biden and other Democrats. He was acquitted by the Senate in early February.

Senate Republicans have been conducting an investigation into Hunter Biden’s overseas business dealings and whether the elder Mr. Biden had improperly used his influence to help his son. They issued a report last month that concluded that while Hunter Biden had “cashed in’’ on his father’s name to close lucrative deals, there was no evidence of improper influence or wrongdoing by the former vice president.

Mr. Trump and his allies have been attacking Mr. Biden over his son’s business dealings for many months, yet those attacks do not appear to have dramatically changed how voters view Mr. Biden’s integrity.

In a Fox News poll conducted in October 2019, 48 percent of voters nationally said they thought Mr. Biden was honest and trustworthy. When voters were asked the same question in a Fox News poll in August, the share who held that view was the same: 48 percent.

And in a national CNN/SRSS poll conducted this month, when voters were asked whether “honest and trustworthy” applied more to Mr. Biden or Mr. Trump, 57 percent chose the Democratic nominee, compared with 33 percent who chose the president.

Hours after the story was posted online Wednesday, Facebook noticed the controversy around the veracity of its claims and over how The Post had obtained the evidence. As the story circulated, the company said it had moved to tamp down its potential for virality.

“I want be clear that this story is eligible to be fact checked by Facebook’s third-party fact-checking partners,” Andy Stone, a spokesman for the social media company, said in a tweet. “In the meantime, we are reducing its distribution on our platform.”

In essence, it meant that Facebook would show fewer instances of shared posts featuring the story in users’ News Feeds, the main way people view and share links and other stories across Facebook. But the company almost immediately faced a backlash online.

Senator Josh Hawley, a Republican from Missouri who aggressively monitors technology companies, demanded an explanation from Facebook on why it had chosen to reduce the article’s distribution in the News Feed. “I want to know on what grounds you are actively censoring a news report about potentially illegal corruption by the Democrat candidate for president,” Mr. Hawley said in a tweet.

‘The Guy in Front of Me Called a Name, and the Other Guy Turned’

As the virus spread, private briefings from the Trump administration fueled a stock sell-off.

Creating Portfolios That Are ‘Not for the Faint of Heart’