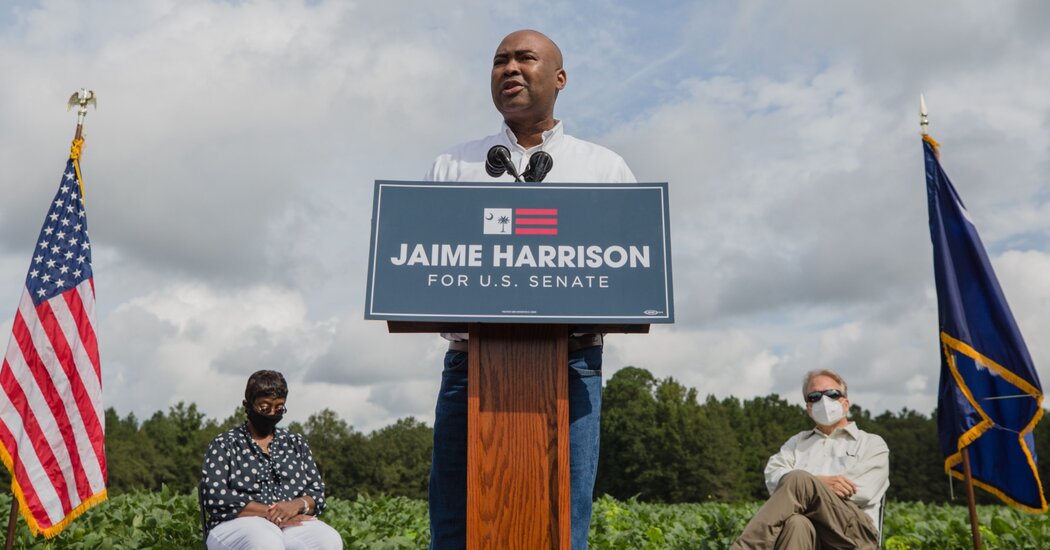 It was a bit of news that came and went quickly amid the fury of political developments these days, but last weekend Jaime Harrison, the South Carolina Democrat who is fighting to unseat Lindsey Graham, announced that he had not merely broken the record for fund-raising for a Senate candidate in a single quarter. He had shattered it.

From July through September, Harrison took in about $57 million. That was nearly $20 million more than Beto O’Rourke, the previous record-holder, collected during the same span two years ago, when he waged his ultimately unsuccessful battle against Ted Cruz in Texas.

“I pinch myself,” Harrison said when I spoke with him on Tuesday night. “Good Lord.”

He’s the recipient of so much money because he’s the vessel of so much hope.

While he may not have the nationwide celebrity that O’Rourke attained in 2018 and South Carolina is much smaller than Texas, the themes in Harrison’s challenge of Graham are as big as can be.

No other political contest in 2020 offers quite the same referendum on the ugliness of Donald Trump’s presidency. No victory would rebut Trump’s vision of America as emphatically and powerfully as Harrison’s would.

Harrison would be the first Black Democrat to be elected to the Senate from the Deep South. The only Black Republican in the Senate, Tim Scott, is also from South Carolina. So South Carolina — where about 40 percent of the enslaved Africans brought to North America arrived, where the Civil War began and where a 21-year-old white supremacist named Dylann Roof killed nine Black churchgoers in their house of worship in 2015 — would have two Black senators and would be the only state with an all-Black Senate delegation.

How’s that for an answer to Trump’s racism and for a stirringly inspirational turning of the page?

Harrison noted that the Senate seat that he is seeking was once held by John C. Calhoun, an infamous defender of slavery. “This was the seat of Benjamin Tillman, who would go to the floor and talk about the joys of lynching,” he added. “This was the seat of Strom Thurmond,” who took a leading role in opposing civil rights legislation.

Harrison, 44, rose from a mobile home to college at Yale, law school at Georgetown and the distinction of being the first Black chairman of the South Carolina Democratic Party. He also worked for Representative James Clyburn, the South Carolina lawmaker who played a key role in salvaging Joe Biden’s beleaguered presidential bid by rallying Black voters to the former vice president.

South Carolina turned Biden’s campaign around. Is it about to set the national tone again?

“If Jaime is to win, then this is the most thorough rebuke of Trumpism that we’ve seen,” Bakari Sellers, a former state legislator in South Carolina, told me. “It also restores a lot of people’s faith in the basic humanity of this country.”

And it’s no pipe dream. While I wouldn’t bet on a Harrison victory — not in a state that Trump won by 14 points in 2016 and that still seems to be safely in his column — some political handicappers now consider the Harrison-Graham race a tossup. Several recent polls show the men effectively tied. Harrison’s financial advantage is overwhelming. And he has been able to blanket the state in ads — excellent ones at that — while Graham has struggled to keep up.

Harrison said that while Graham hasn’t done a traditional, in-person town hall with voters in South Carolina in years, “You can find him on Sean Hannity every other night begging for money.”

Graham craved this week’s hearings on Trump’s Supreme Court nominee, Amy Coney Barrett, because, as chairman of the Senate Judiciary Committee, he’s getting oodles of free television exposure just when he needs it. He’s surely also betting that his role in elevating another conservative justice will please many South Carolina voters and shift their attention from his breathtaking inconstancy.

He once vowed that he’d never consider, let alone promote, a Supreme Court nominee put forward in the last year of a president’s term, telling journalists to mark his words and use them against him if the need ever arose. The need sure did.

He once railed that the way to make America great again was to “tell Donald Trump to go to hell.” Now he’s Trump’s adoring golf buddy. Does that mean Graham is a fairway-weather friend? It certainly means that his convictions have all the weight of whipped cream.

One of the main story lines of the Trump years has been the spectacular moral capitulation of most Republican lawmakers, who junked supposedly cherished principles to placate a president whose hold on his base and capacity for vengeance mattered more to them than honor, than patriotism, than basic decency. Graham is the poster boy of that surrender, Complicitus Maximus, in part because his 180-degree turn to Trump required that he show his back to his close friend and onetime hero John McCain.

Graham’s defeat by Harrison would be more than a personal comeuppance. It would be a morality play. And so, just as the unprecedented contributions to O’Rourke owed plenty to the nastiness of Cruz, the even bigger contributions to Harrison speak to the noxiousness of Graham.

“Lindsey Graham is, next to Mitch McConnell, the most attractive target for the left to take down,” Todd Shaw, an associate professor of African-American studies and political science at the University of South Carolina, told me.

Harrison conceded that a significant measure of his traction in this race is attributable to “the fever about Lindsey Graham,” who personifies what voters dislike most about politicians. “So many people thought so highly of him, and to have him betray that trust has added an extra layer of passion,” Harrison said.

He added: “The country is simply tired of being divided. They’re tired of the chaos. They’re tired of the racialized rhetoric. One of the things I say, tongue-in-cheek, is that we need a national holiday after this election so that all of us can sit on a counselor’s couch for a few hours. We all just need that reprieve.”

Jessica Taylor, who analyzes Senate races for the nonpartisan Cook Political Report, told me that Graham’s predicament was neatly illustrated by a surprising recent development: “He started running a biography ad this past weekend.” That suggests that he’s concerned about his likability and needs to reintroduce himself to his constituents. “That’s not the kind of ad you run if you’ve been in Congress for 25 years,” Taylor said.

Like other prominent political analysts, she favors Democrats, who are currently at a three-seat disadvantage, to regain control of the Senate. She gives them the clear edge to defeat Republican incumbents in Colorado and Arizona, and she puts seven other races with Republican incumbents, including Harrison’s, in the tossup category.

One of those races, in Georgia, also involves a Black Democratic challenger, Raphael Warnock, the senior pastor at Ebenezer Baptist Church in Atlanta. He’s trying to unseat Senator Kelly Loeffler, and if both he and Harrison were to win, there would be two popularly elected Black Democratic senators from the Deep South, where there had never been any before.