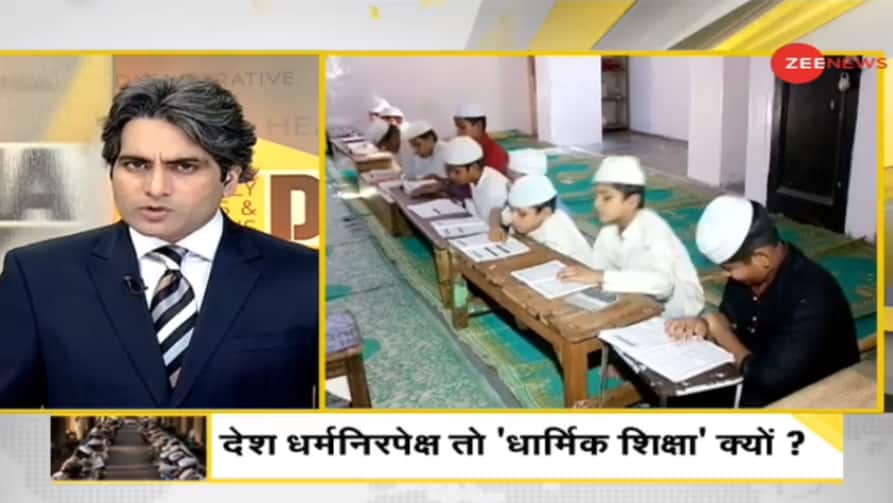 New Delhi: Should religious education be allowed at the expanse of government money in a secular country like India? The issue has come to the fore in the wake of Assam Education Minister Himanta Biswa Sarma’s statement that the state-run Madrasas will either be converted into regular schools or they will be shut down.

Elaborating on it, Sarma said “All State-run madrassas will be converted into regular schools or in certain cases teachers will be transferred to state-run schools and Madrasas will be shut down. A notification will be released in November.”

He said the decision is being taken to bring uniformity, adding “Teaching `Quran` cannot happen at the cost of government money, if we have to do so then we should also teach both the Bible and Bhagavad Gita. We want to bring uniformity and stop this practice.”

This has evoked opposition from across the country and the ‘secular brigade’ has termed this decision as an injustice to minorities. The question arises whether the inclusion of religion in education is against Secularism or exclusion of religion from education is true Secularism. The DNA report will try to understand that when the demand for Uniform Civil Code is being raised in the country they why should religious education be given to children at the government expense?

In these states, religious education is continuing at the government expense, and this practice of appeasement has a legacy of 70 years in India. Article 30 of the Indian Constitution gives minorities in India the right to establish their own linguistic and educational institutions. They can also seek grants from the government without any discrimination. The Madrasas in India flourished under this Constitutional right.

According to the Ministry of Education’s data for the year 2018, the Central government is extending monetary help to Madrasas to improve their education standard in as many as 18 states. In 4 states of India, there are more than 10,000 Madrasas where over 20 lakh students study. The highest number of these Madrasas are in Uttar Pradesh where more than 18 lakh students study in over 8000 Madrasas.

Madrasas are said to have started in the seventh century when those eager to learn were taught Islamic religion at mosques. During the 400 years that followed, Madrasas began to develop as separate centers of education.

In the beginning, people who were economically prosperous used to bear the expenses of Madrasas. By the 11th century, Madrasas began to develop into the largest centers of religious education. As the money came to them, they also got permanent buildings, teachers, and maintenance staff.

At a time when only 5 percent of people in Western countries could read and write, lakhs of Muslims have imparted education in Madrasas, which were later established in countries like Russia, Mongolia, China, India, and Malaysia.

With the expansion of British colonialism in the 19th and 20th centuries, Christian missionary schools were established all over the world. The motive behind the establishment of these schools was also to propagate Christianity, but the British made education of science, mathematics, and technology as its basis.

This led to the creation of more employment and people started coming to Christian schools. On the contrary, students who came out of Madrasas gradually failed to compete and they were relegated to the fringes.

The Assam government’s notification would convert as many as 1500 Madrasas into schools. Of these, 614 are the government-run madrasas, while the rest of 900 are private. The state government spends Rs 3 to 4 crores annually on them, but this aid will now stop. Notably, Rs one crore is merely spent on Sanskrit schools here annually.

This discrimination is not limited to any one state. Vaishno Devi University in Jammu and Kashmir gets an annual grant of Rs 7 crore, and so far only half of this grant has been issued, while Baba Ghulam Shah Badshah University in Rajouri and Islamic University in Avantipura in Kashmir have already received Rs 20 crore each. Each of these varsities also gets additional grants of Rs 25 crores. The state government gives financial aid to these universities.

The Assam government’s decision is being opposed to a plea that the religious freedom of Muslims is taken away. However, we should understand that religious education taught at Madrasas is, in fact, depriving Muslim students of modern education.

Notably, the literacy rate among 20 crores Muslims living in India is less than SC/ST and OBC. According to the National Statistical Office (NSO) data, only 48 percent of Muslim students in India are able to study up to class 12, while 14 percent could study beyond 12th standard.

For the past 70 years, the successive governments merely appeased the Muslims for their votes and relegated them to fringes in education, health, and economic activities.

Madrasas have gradually started to influence Muslims psychologically. These Madrasas gradually became effective in India. The Centre’s interference in education provided through Madrasas also increased, but no one dared to stop it or end this system.

A Local Alternative to the Big Delivery Apps, in Los Angeles

Why Is the G.O.P. Fighting to Preserve Monuments to Traitors in the Capitol?

India hits out at Pakistan over ‘systematic persecution of religious minorities’, calls it ‘epicentre...