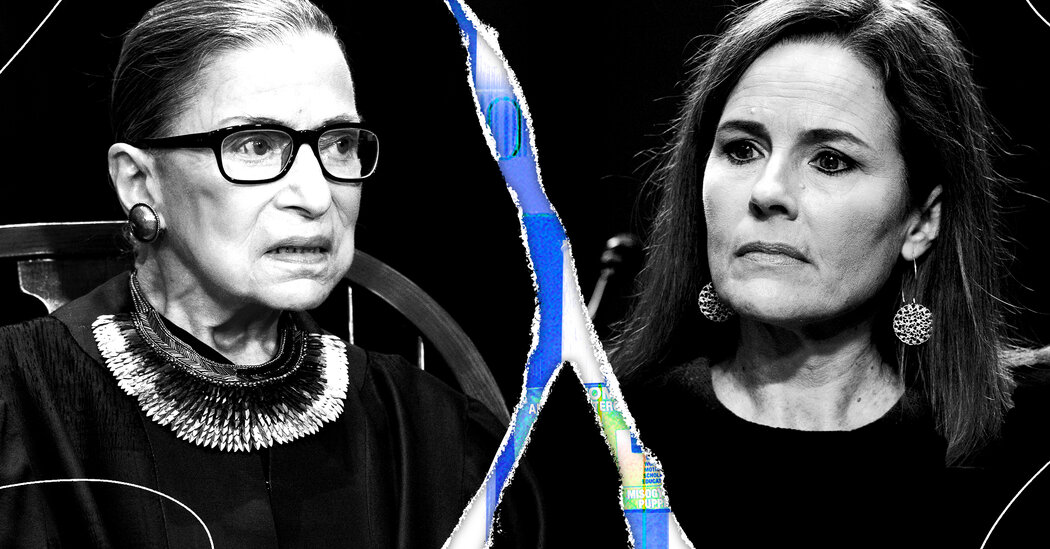 Sitting before the 22 members of the Senate Judiciary Committee on Tuesday — some behind a mask, others behind a computer screen — Judge Amy Coney Barrett took pains to stress that she was neither a pundit nor a partisan.

“Judges cannot just wake up one day and say, ‘I have an agenda: I like guns, I hate guns, I like abortion, I hate abortion,’ and walk in like a royal queen and impose their will on the world,” she said. “I have an agenda to stick to the rule of law and decide cases as they come.”

It was a familiar rendering of the judge as disinterested arbiter of the law, but, as my colleague Nicholas Fandos writes, one that bears scant relation to the reality of the Supreme Court. What does her record tell us about how a Justice Barrett might rule, and how would her tenure shape the country’s future? Here’s what people are saying.

Like her mentor Justice Antonin Scalia, Judge Barrett is an adherent of so-called public-meaning originalism, a jurisprudential theory by which judges claim to interpret the Constitution as people understood it at the time of its ratification.

Conservatives have championed originalism in recent decades as a doctrine of judicial restraint, but it has counterrevolutionary implications: As Judge Barrett herself wrote in 2016, “Some decisions thought inconsistent with the Constitution’s original public meaning are so well baked into government that reversing them would wreak havoc.”

The tension between Judge Barrett’s ostensibly conservative legal philosophy and the radical decisions it might compel — reversing Brown v. Board of Education, for example — is a subject she has explored at length in her legal writings. Keith E. Whittington, a professor of politics at Princeton and an expert on originalism, sums up her position in The Times:

“Even an originalist judge, she believes, should frequently defer to what might be flawed precedents. That is true for what are sometimes called ‘superprecedents’ like the unconstitutionality of racial segregation and the constitutionality of paper money, but it is also true for many more ordinary precedents that might have been badly reasoned but that are now broadly accepted.”

Because she favors what she has called a “weak presumption of stare decisis” — the principle of deferring to precedent — Mr. Whittington believes Judge Barrett would be a less staunch originalist than Justice Clarence Thomas, whose readiness to overturn longstanding rulings was considered extreme even by Justice Scalia.

But in the main, Judge Barrett would still be one of the court’s more reliable right-wing justices, according to my colleague Adam Liptak. “She has compiled an almost uniformly conservative voting record in cases touching on abortion, gun rights, discrimination and immigration,” he writes. “If she is confirmed, she would move the court slightly but firmly to the right, making compromise less likely.”

Abortion rights are one reason Judge Barrett’s views about precedent have featured so prominently in her confirmation process. Where she stands on the issue has long been plain: In 2006, she signed a newspaper ad opposing “abortion on demand” and defending “the right to life from fertilization to natural death.”

While Judge Barrett has vowed to set aside her personal views on the bench, neither her supporters nor her opponents have much reason to doubt that her appointment would threaten access to abortions, which under the Trump administration have become harder to get in many places than at any time since the procedure was legalized nearly 50 years ago. In her writings, she has pointed to the legacy of Roe v. Wade as evidence of a “public rejection” of stare decisis and cited legal experts who do not count Roe v. Wade among untouchable Supreme Court decisions.

Yet as Dahlia Lithwick points out in Slate, the Supreme Court need not overturn Roe v. Wade for abortion access to be further limited. In her time on Seventh Circuit Court of Appeals, Judge Barrett has considered three laws restricting abortions from her home state, Indiana, and in all three instances expressed misgivings about earlier decisions made by appeals judges to block them. And in 2001, she gave a speech in which she said that even if Roe v. Wade remains on the books, laws regulating abortions would change.

“In other words,” Ms. Lithwick writes, “Barrett is letting you know that she might hesitate to overturn Roe and its progeny outright, but she’d gladly let states impose so many barriers that millions of women lose access as a matter of fact, if not law.”

How would her appointment affect the election?

Shortly before nominating Judge Barrett in September, President Trump said he was eager to seat Justice Ruth Bader Ginsburg’s replacement before Nov. 3 because he expected the election would be disputed and wanted a new justice who would rule in his favor. Senate Democrats have said that Mr. Trump’s statements reveal a clear conflict of interest and have called on Judge Barrett to promise to recuse herself from any case involving the presidential election.

Judge Barrett declined to answer that call on Tuesday, instead offering generic assurance that she would faithfully work through the decision. Legal experts told Reuters that while Joe Biden could be justified in filing a recusal motion, the decision would ultimately be hers.

In any case, the election law scholar Richard L. Hasen argues that the public should be far more concerned about the long-term effects Judge Barrett’s appointment could have on voting rights.

“In short, a Barrett confirmation would make it more likely we will see a significant undermining of the already weakened Voting Rights Act,” he writes in New York magazine. “A 6-3 conservative court might allow unlimited undisclosed money in political campaigns; give more latitude to states to suppress votes, especially those of minorities; protect partisan gerrymandering from reform efforts; and strengthen the representation of rural white areas, which would favor Republicans.”

Will Barrett strike down Obamacare?

If Republicans have their way, Judge Barrett will be on the court to hear arguments on the latest challenge to the Affordable Care Act, a week after the election. In a 2017 law review essay, Judge Barrett criticized Chief Justice John Roberts’s 2012 decision to uphold the law by construing its penalty for people who forgo health insurance as a tax, arguing that he had “pushed the Affordable Care Act beyond its plausible meaning to save the statute.”

With that argument in mind, Senate Democrats on Monday suggested Judge Barrett was “a judicial torpedo” launched to destroy the Affordable Care Act. But not everyone is so sure her confirmation would spell the law’s end: As Ruth Marcus writes in The Washington Post, Judge Barrett’s specific criticism of Justice Roberts’s ruling no longer applies — congressional Republicans killed the individual mandate penalty as part of their 2017 tax bill — and many scholars consider the legal argument at the heart of the latest challenge too weak even for right-wing justices to accept.

The gathering storm on climate change

Even before Judge Barrett’s nomination, legal scholars predicted that the Roberts court would probably doom ambitious climate change legislation, in part by restricting the ability of government agencies to enforce environmental regulations.

While Judge Barrett does not have a long record on environmental law, she seems poised to join in the current court’s skepticism of broad regulatory authority. “I view Barrett being added to the court as taking it even further in the direction it was already going,” Jody Freeman, founding director of the Environmental and Energy Law Program at Harvard Law School, told Scientific American.

At the same time, Michael Gerrard, a professor of law at Columbia, argues that Congress could still pass legislation capable of surviving the scrutiny of a right-wing judiciary. “If the laws are clear and unambiguous and specific enough,” he told Grist, “Congress ties the hands of the courts.”

How would Barrett affect businesses and workers?

On corporate and labor law, Judge Barrett’s record tells a fuller story. “In cases ranging from harassment on the job to debt collection, Barrett’s opinions have often tilted toward bosses and business,” Charisse Jones reports for USA Today.

In 2017, for example, she voted against rehearing a case in which the Equal Employment Opportunity Commission accused a company of assigning workers to particular stores based on race and ethnicity. In 2019, she ruled that a supervisor’s calling a Black employee “an egregious racial epithet” did not prove the existence of a hostile work environment. (Interestingly, Justice Brett Kavanaugh took the opposite view while serving as a federal appeals court judge in 2013.) And in August, she ruled against Grubhub drivers, arguing that they were not entitled to sue the company for overtime pay.

It is perhaps also telling that Charles Koch, who has used his vast fortune for decades to advance corporate interests, has activated his political network to support Judge Barrett’s nomination. “Charles Koch believes that an unregulated free market is the only sustainable structure for human society,” Christopher Leonard writes in The Times. “With the nomination of Judge Barrett to the court, he appears to be closer than ever to achieving this goal.”

A reckoning over judicial supremacy?

At FiveThirtyEight, Amelia Thomson-DeVeaux writes that Judge Barrett’s nomination process could further erode public trust in the Supreme Court as an apolitical, independent branch of government, which has already been falling for nearly two decades.

“If Barrett is confirmed and pushes the court’s decisions to the right, I suspect many decisions will be much more conservative than the public prefers, these decisions will get a lot of media attention, and public confidence in the court will decrease,” Peter K. Enns, a political-science professor at Cornell, told Ms. Thomson-DeVeaux.

Yet for those who believe the judiciary wields far too much power over our democracy — and, moreover, that it can never be depoliticized — increased skepticism of the Supreme Court would be a welcome development. The law professors Ryan D. Doerfler and Samuel Moyn argue that as contentious as Judge Barrett’s nomination is, it has had one benefit: “It’s made it clearer than ever that Supreme Court reform is an urgent democratic cause, one that requires rethinking the federal judiciary from the ground up.”

“How L.G.B.T.Q. Rights Will Fare Under a Conservative Supreme Court” [Bloomberg]

“SCOTUS Could Use More Skeptics Like Amy Coney Barrett” [Reason]

Here’s what readers had to say about the last edition: What we learned from the vice-presidential debate.

Rino from Maryland: “Kamala Harris opened the door to enlarging SCOTUS membership with her retort that any court ‘packing’ has already been done by the Republicans. If the Coney Barrett nomination goes forward and the Dems win both the White House and the Senate, court enlargement can be advanced as a corrective of McConnell’s block of Merrick Garland in 2016 and his prior obstruction of dozens of other Obama judicial nominees. SCOTUS expansion would thus be plausibly justified as court unpacking.”

Tim from Colorado: “I wish that debate moderators would ask the ‘contestants’ to define some of the terms they use, e.g., ‘socialism,’ ‘radical left,’ ‘ the American people,’ ‘traditional values,’ ‘socialized medicine’ et al. These terms have as many definitions as the number of people saying or hearing them.”

What John Bolton and His Book Say About Trump’s Washington