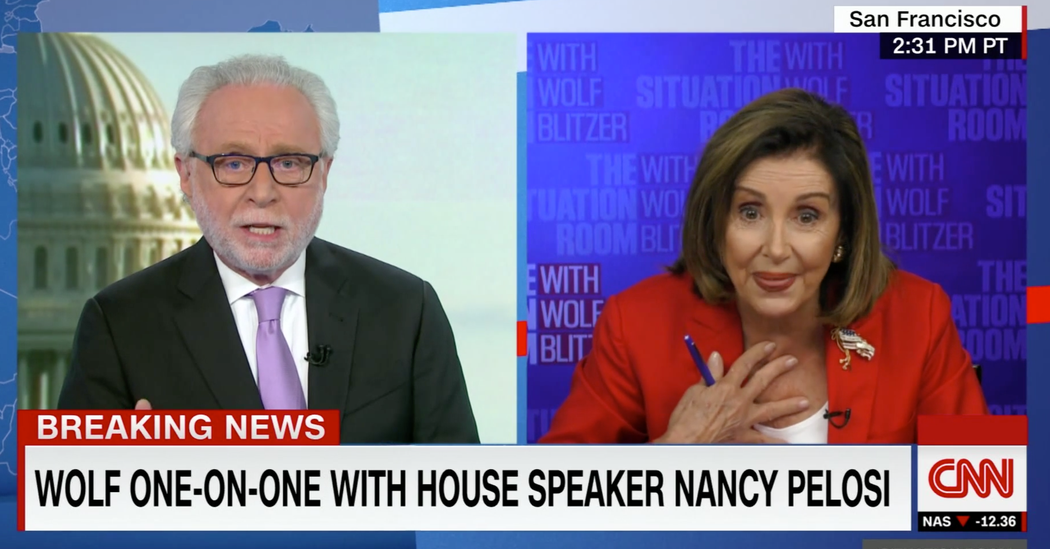 Speaker Nancy Pelosi of California defended her unwillingness to accept anything less than a broad coronavirus stimulus package in negotiations with the administration, on the same day that President Trump called on Twitter for negotiators to “go big or go home!!!”

Senate Republicans, meanwhile, are heading toward a vote to advance a scaled-down package that Democrats are unlikely to support.

In a heated CNN interview, Ms. Pelosi chastised Wolf Blitzer, the CNN anchor, and his colleagues as “apologists for the Republican position” after Mr. Blitzer noted that some Democrats, including Andrew Yang and Representative Ro Khanna of California, have urged her in recent days to cut a deal with the administration. Steven Mnuchin, the Treasury secretary, last put forward a $1.8 trillion framework in negotiations.

The interview on Tuesday further underscored Ms. Pelosi’s unwillingness to accept a scaled-down bill, even as Senator Mitch McConnell of Kentucky, the majority leader, announced the Senate would vote to advance such a package when the full chamber returns later this month. Senate Democrats have also accused their Republican counterparts of prioritizing a Supreme Court confirmation over negotiating a stimulus bill.

The scaled-down package, Mr. McConnell said at an event in his home state of Kentucky, is likely around $500 billion and containing funds for hospitals, schools, enhanced unemployment benefits and the Paycheck Protection Program, a popular federal loan program for small businesses that has expired without congressional action.

It is unlikely that such a package would secure the necessary Democratic support needed to clear the chamber, a reality further highlighted by the combative CNN interview with Ms. Pelosi. When Mr. Blitzer pressed her again to not let perfect be the enemy of the good, given the mounting toll of the pandemic, she said the administration’s offer was “not even close to the good.”

In a private caucus call before the interview, she and her top lieutenants on Tuesday continued to rail against the administration’s latest offer was inadequate.

Ms. Pelosi pushed back on the suggestion that she should accept anything less than the latest $2.2 trillion Democratic proposal, after coming down from the original $3.4 trillion proposal the House approved in May.

“I appreciate, shall we say, a couple people saying, ‘Take it, take it, take it,’” Ms. Pelosi said. “Take it? Take it? Even the president is saying, ‘Go big or go home.’”

But the $1.8 trillion offer also faced additional resistance among the majority of Senate Republicans, who lashed out at top administration officials on Saturday for putting forward a counteroffer that they felt to be too expensive and veering toward catering too much to Democratic priorities.