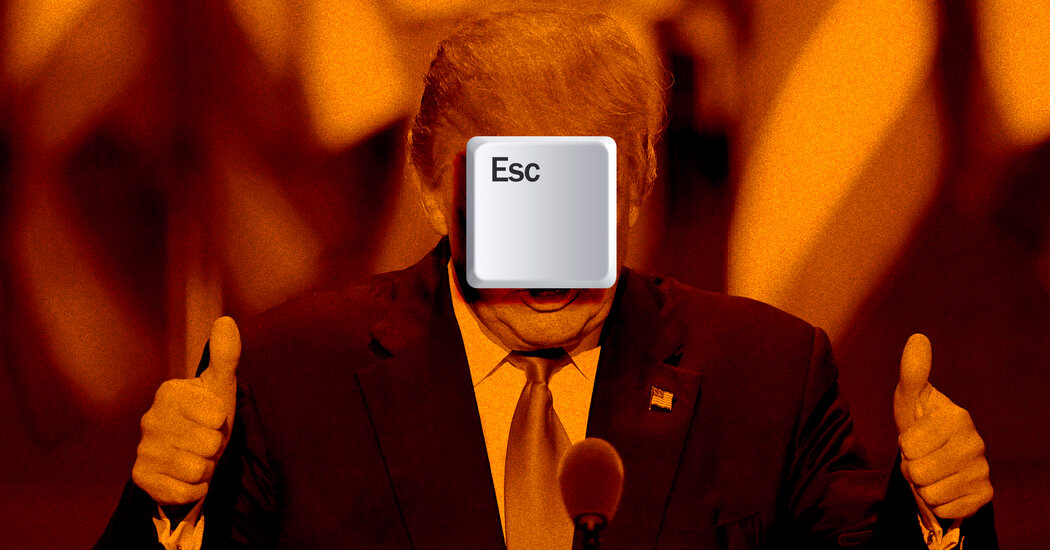 Finishing up the dinner dishes one evening last week, I was jolted by a song on my teenage daughter’s playlist. In the radio-edited version of “F2020,” Avenue Beat delivers a captivating chorus, followed by: “I am kinda done. Can we just get to 2021?”

Turning to my daughter, I joked, “Shouldn’t that be a sort of anthem for this year?”

“For many in my generation, it already is,” she replied.

It’s only October, and 2020 feels like the longest, most brutal year in memory. There are now almost 215,000 lives lost in the United States, vulnerable children missing months of education and tens of millions of people facing economic devastation. President Trump’s willful failure to confront Covid-19 has brutalized our country.

If that is not enough, Mr. Trump continuously stokes division, fear and hatred in this moment of historic racial reckoning, while running roughshod over the rule of law, and our democratic norms and institutions. Almost every day, it seems something crazier happens than on the day before, further straining our collective credulity.

Still, we are most likely facing even worse in the next few months. The pandemic could crescendo in winter. The Senate is poised to ram through a radical and illegitimate Supreme Court nominee. Political tensions are escalating, as Mr. Trump musters white supremacist groups and threatens to thwart the peaceful transfer of power should he lose re-election.

The sense of exhaustion, frustration and foreboding so many of us feel is aptly captured in the Avenue Beat song. But so is what gives me hope — getting to 2021. The prospect of sweeping change, while by no means assured, appears to be in sight.

To dull the pain and bolster my sanity, I allow myself occasionally to take a few deep breaths and just imagine.

I imagine a future with competent, compassionate presidential leadership, which trusts science and adopts policies designed to protect the American people. A future in which we truly bend the Covid-19 curve, a future with a safe and effective vaccine that is free as well as fairly and rationally distributed. I conjure a time when a constructive Congress swiftly enacts economic relief that will ease the suffering of ordinary Americans, support our public schools and other essential state and local government services, and rescue small businesses.

Daring to dream really big, I envision a president who insists on the dignity and worth of every human being, who fervently believes that what unites us as Americans is far more powerful than what divides us. A president committed to equal justice and healing; to ambitious reforms to combat systemic racism and reduce inequality; to humane immigration policies; and to transformational investments in education, housing, health care, the environment, jobs and economic mobility for those who need it most.

Exhaling, I think about sleeping soundly again at night, knowing we have an experienced, empathetic, sober and steady president — one who refrains from tweeting personal attacks on his opponents. One who respects rules and norms, understanding that the law applies equally to him. I long for a leader who aims to serve all Americans, who doesn’t bilk taxpayers to line his own pockets or corrupt the federal government to preserve his own power.

Finally, straining not to let my imagination run too wild, I indulge my national security fantasies. I pine for a commander in chief who knows personally the stomach-turning fear of what could befall a loved one deployed in harm’s way, one who treats our veterans as heroes instead of denigrating them as “suckers” and “losers.”

I imagine allies who allow themselves to trust and respect us again. Adversaries who know they cannot influence an American president with flattery, lucrative deals or election assistance. A White House that upholds our national interests and consistently promotes democracy and human rights — from Xinjiang to Saudi Arabia to Venezuela. The United States would return to the Paris Agreement on climate change and the World Health Organization, as we seek to reinvigorate international institutions, because we understand that many of the most pressing global challenges can be tackled only through effective collective action.

Then, I check myself. Soothing as it may be to disappear briefly into my own dreams, I’m inevitably smacked by the inescapable realities of this year from hell. Still, I remember that what may seem like elusive hopes are no more than the reasonable expectations of a deserving public.

In his Oval Office, President Barack Obama had a large carpet with a border inscription: “The arc of the moral universe is long, but it bends toward justice.” Those words, said often by the Rev. Dr. Martin Luther King Jr., serve as an apt reminder that history is not linear. While progress may ultimately prevail, it comes in fits and starts with severe setbacks. Indeed, our dreams may never become our reality.

Yet in my experience, work matters; no one will do the hard bending but you and me. Progress doesn’t happen automatically. Together, we must drive it.

Susan E. Rice (@AmbassadorRice), the national security adviser from 2013 to 2017 and a former U.S. ambassador to the United Nations, is a contributing opinion writer and the author of the memoir “Tough Love: My Story of the Things Worth Fighting For.”

Bookings for daily flights from Darbhanga to Delhi, Mumbai, Bengaluru to start by September...