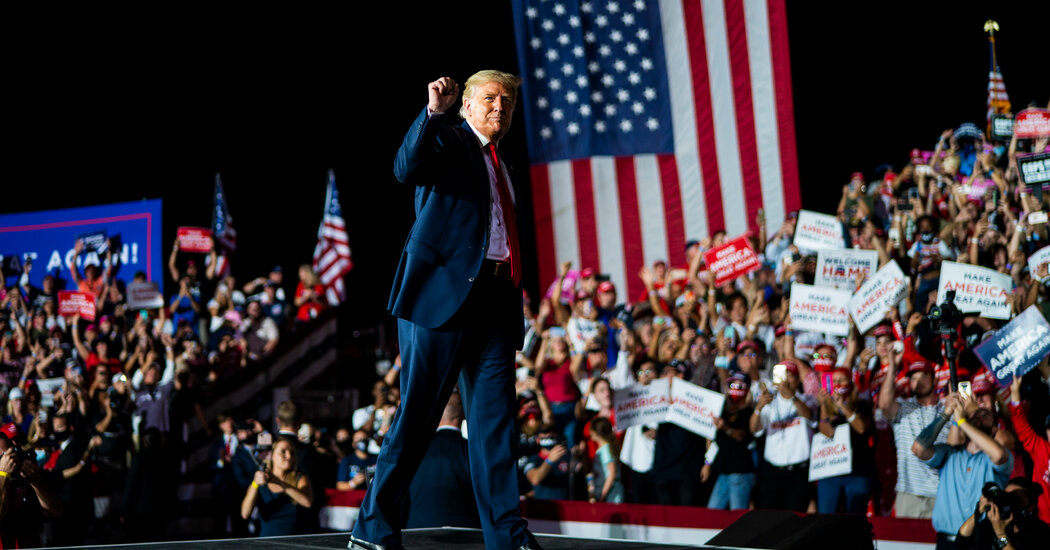 WASHINGTON — Personal lawyers for President Trump, seeking to appeal their case to the Supreme Court for the second time in less than a year, asked the justices on Tuesday to delay a ruling that would allow the Manhattan district attorney to obtain Mr. Trump’s financial records.

In a 38-page “emergency” application, Mr. Trump’s legal team told the court that a Federal District Court judge was wrong to rule that the prosecutor, Cyrus R. Vance Jr., had a legal right to subpoena the materials — and that an appeals court panel in New York was wrong to uphold that ruling this month.

“Allowing this deeply flawed ruling to stand, especially given the prominence of this case, will needlessly sow confusion where none presently exists,” wrote Mr. Trump’s legal team, including William S. Consovoy and Jay Sekulow. “The decision is indisputably wrong.”

The request for Supreme Court intervention had been expected since a three-judge panel of the U.S. Court of Appeals for the Second Circuit unanimously ruled on Oct. 7 that Mr. Vance could use a grand jury to obtain Mr. Trump’s financial records, rejecting the president’s arguments that the request was overly broad and amounted to politically motivated harassment. Mr. Vance is a Democrat.

“Grand juries must necessarily paint with a broad brush,” the judges wrote, adding: “None of the president’s allegations, taken together or separately, are sufficient to raise a plausible inference that the subpoena was issued out of malice or an intent to harass.”

The request for intervention marks a return for the case. In July, the Supreme Court ruled, 7 to 2, that the fact that Mr. Trump was the sitting president did not make him absolutely immune from criminal investigation, as his legal team had argued.

“No citizen, not even the president, is categorically above the common duty to produce evidence when called upon in a criminal proceeding,” Chief Justice John G. Roberts Jr. wrote for the majority in that decision.

However, the Supreme Court left Mr. Trump with other arguments to make before lower courts, including that the subpoena was too broad or issued in bad faith. Mr. Trump’s legal team has been trying out those arguments without success before lower courts — although the litigation has consumed months, continuing to run out the clock before the election.

Breaking with precedent and norms, Mr. Trump refused to release his tax returns when he sought the presidency in 2016. In 2019, House Democrats and Mr. Vance separately subpoenaed the documents from the president’s accountants, and he has been fighting them ever since.

Separately, however, The New York Times obtained access to more than two decades of tax return data of Mr. Trump and the Trump Organization and late last month began publishing a series of investigative articles about what they showed.

The Times found, among other things, that despite Mr. Trump’s boasting about a huge income, his business empire has actually suffered huge losses, which he has leveraged to avoid paying income taxes in 11 of the 18 years The Times scrutinized; he paid just $750 in taxes in 2016 and 2017. It also showed that the I.R.S. was investigating the legitimacy of a $72.9 million refund he claimed in 2010, which he may be forced to pay back with interest, and that in the next four years, more than $300 million in loans for which he is personally responsible will come due.

The records also revealed numerous other issues with potential tax law implications, like a highly unusual $21 million payment from a Las Vegas hotel that Mr. Trump co-owns that was routed through other Trump companies at a time he was raising cash for his 2016 campaign, and the income his properties have received from people seeking favorable action from the government and access to him when he visits those properties.

While it is clear that Mr. Vance is overseeing an investigation about Mr. Trump and his business practices, he has not publicly detailed the precise focus on the inquiry. Still, court filings by prosecutors suggest they are looking at potential crimes that include tax and insurance fraud and falsification of business records. Their subpoena to Mr. Trump’s accounting firm, Mazars USA, also seeks records and communications with the president.

The filing to the Supreme Court by Mr. Trump’s legal team on Tuesday does not mention The Times’s recent reporting, and treats the tax returns as if their contents are still entirely confidential.

Among the arguments that his lawyers made was that the president would be harmed not only by the records falling into the hands of prosecutors — who are generally required to keep subpoenaed material secret under grand jury rules — but also by the risk that they would become public, like if Mr. Vance were to put data from them in an indictment.

“If the president’s records are disclosed publicly (as thus could happen even without a grand-jury breach), then the harm will not only be irreparable. It will be case-mooting,” Mr. Trump’s lawyers wrote, calling that a particularly compelling justification to stay the order for Mazars to turn over the materials while they continue to fight the case.

The Lesson We’re Learning From TikTok? It’s All About Our Data

With Moria’s Displaced, a Larger Conundrum for Europe