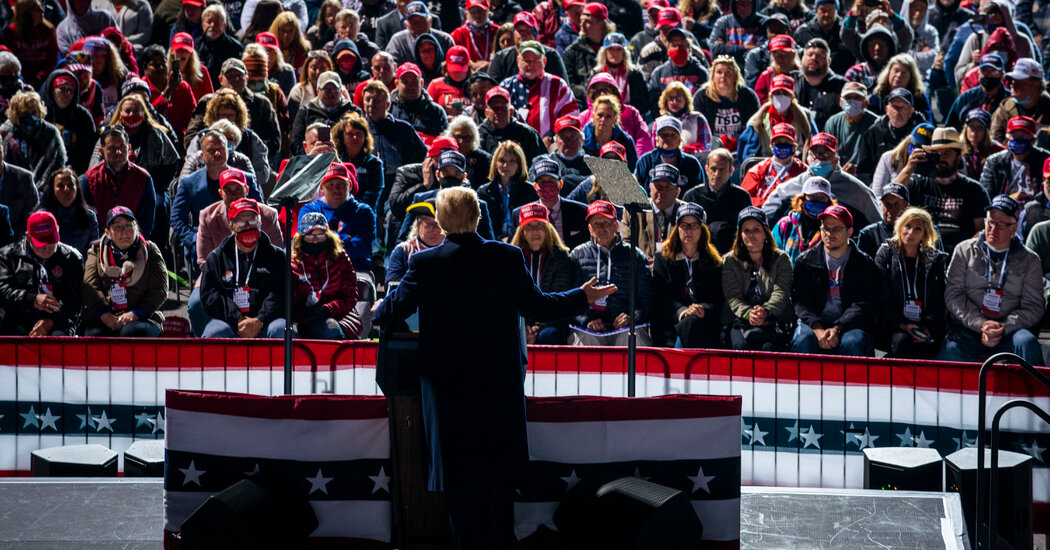 President Trump traveled on Tuesday to Johnstown, Pa. — exactly the kind of place where he needs to run up the score next month — and, even with a teleprompter in tow, he veered off script to instead deliver some stage directions for the electorate.

“Suburban women, will you please like me?” Mr. Trump said at his rally. “Please. Please. I saved your damn neighborhood, OK?”

The itinerary of Mr. Trump’s return to the campaign trail after his multiday hospitalization with the coronavirus this month shows the extent to which the president has been forced into a defensive posture in the final weeks of the campaign.

He is pleading directly with women who have abandoned him in large numbers, and on Friday he will make stops in Florida, a must-win battleground, and Georgia, a longtime Republican stronghold now firmly up for grabs.

And for a second straight day, Mr. Trump joked about wading down into the crowd from the stage to kiss people, since he says he has recovered from the virus. “Now I’m immune,” he crowed.

His Democratic challenger, Joseph R. Biden Jr., spent the day in Florida, and delivered his remarks while wearing a mask.

Mr. Trump’s campaign put out a rare set of “prepared” excerpts in advance of his rally on Tuesday, with messaging that mostly reprised his 2016 come-from-behind approach, calling Mr. Biden a “a servant of the radical globalists” and casting himself as an agitator who would not “play by the rules” of Washington.

As Mr. Trump appealed to women, Mr. Biden sought to bolster his growing strength with older voters, a large, typically Republican bloc that has moved away from the president.

He pitched himself to senior citizens by invoking what many care about most: their grandchildren.

Accusing Mr. Trump of throwing “super-spreader parties at the White House,” he said older voters had been forced into separation from their families for their own safety. “How many of you have been unable to hug your grandkids in the last seven months?” Mr. Biden said.

Shortly after his rally had wrapped, Mr. Trump, 74, posted a meme to his Twitter account mocking Mr. Biden, 77, as elderly. Last week, he had recorded a video on the White House grounds praising seniors as his “favorite people in the world.”

“I just can’t quite figure out why @JoeBiden is the first Democrat in decades to be winning the senior vote??!!” he wrote.