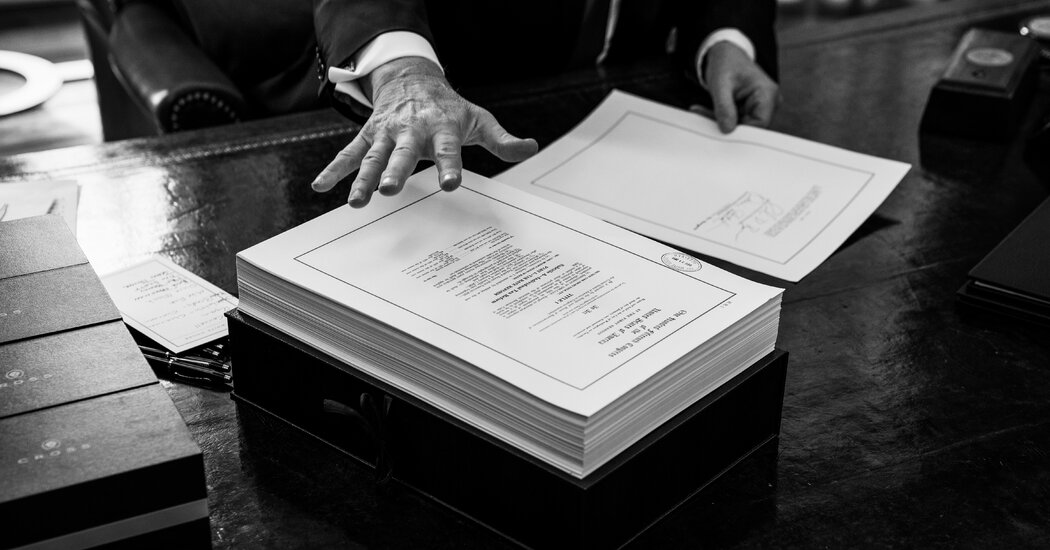 When Americans recently learned how little President Trump has paid in taxes in the past 15 years and how he benefited from financial maneuvers, it reinforced the widespread belief that the rich don’t pay their fair share. Lost in the outrage is the fact that the tax provisions that allowed Mr. Trump to trim his tax bill were probably not illegal or the results of tax schemes concocted by anti-tax legislators.

Those provisions, and many others like them, delivered exactly what their drafters intended: They are engineered to benefit certain kinds of taxpayers — and most Americans are not among them.

There are many aspirational visions for the tax code. If yours is a wildly complex, 2,600-page code of rules and frustration, you win, because that’s what we have now. If you desire a federal tax code that’s an archaeological record of special-interest politics, chiseled out over time with giveaways under the cover of achieving social goals like subsidized child care, homeownership, health care, higher education and more, you win again.

But if your vision is for a more equitable system that can actually be enforced by the I.R.S., what we really need is a simpler and fairer tax code. Some of the current rules are good, but many are political giveaways to special interests. Telling those rules apart is actually harder than it seems, but there are some obvious places to start.

The beneficiaries of the tax code’s complexity are the well-to-do and well-connected individuals and corporations who work hard to create and expand loopholes — and can afford accountants who can take advantage of the intricacies. Politicians, rewarded with campaign contributions, are clear beneficiaries, too. This results in hundreds of tax credits, deductions and special tax rates, including those used by Mr. Trump.

The losers are most Americans, who have no clue what’s in the tax code and collectively spend about eight billion hours a year complying with its filing requirements.

A good place to start simplifying is to get rid of tax privileges granted to politically favored special interests. Listing all of them would be an impossible task, but there are candidates for elimination that enjoy at least some degree of bipartisan support.

Since 1913, interest on municipal bonds issued by state and local governments has been exempt from federal income taxation. It is a favorite loophole for wealthy taxpayers, who invest in them. It is also a delight for Wall Street, which profits from all the municipal-bond issuing and trading.

Getting rid of even one of these deductions is hard. The state and local tax deduction (or SALT) deduction benefits mostly high-income taxpayers. Even many Democrats, who are quick to complain about the rich not paying their fair share, fervently support it.

In a rare exception, the Republican tax reform act of 2017 capped the SALT deduction at $10,000 (previously, more than 88 percent of the benefit flowed to people with incomes in excess of $100,000).

But the fight isn’t over. Covid-19 relief bills adopted in the Democratic House include a temporary repeal of the $10,000 SALT cap; it was not the only recent attempt by Democrats to give a billion-dollar tax break to high-earning households — Senator Chuck Schumer of New York was part of a similar effort earlier this year. (Negotiations over a new relief bill that may or may not take up the SALT deduction continue.)

Yet calls to end all tax deductions, credits and exemptions can be problematic, too. In some cases, what look like “giveaways” to businesses — like a loss carryback, which allows them to smooth out their tax bills over multiple years — actually represent good policy. In Mr. Trump’s case, the public doesn’t know enough to judge whether he abused the exemption or is simply a terrible businessman.

But we wouldn’t want to tax a business that made a $1 million profit this year if it lost $1 million annually over the previous two years. Since it’s still losing money overall, it should be able to average its profits. And we wouldn’t want to tax entrepreneurs and start-ups at higher rates than we tax established businesses like Amazon and Walmart.

The same is true for those who assume it is easy to know which business expenses are acceptable or objectionable. For instance, if the C.E.O. of a company flies to Paris for a meeting with clients on Friday but decides to stay the weekend as a tourist, it seems wrong for this person to deduct the cost of extra hotel nights. But what if the cost of staying the weekend is actually less than the cost of staying for just one night? Which one does the C.E.O. deduct? Or how should we distinguish the cost of hair and makeup for a TV show from the cost of a hair stylist for everyday life?

No matter what the tax system is, as long as we tax businesses, figuring out what counts as a legitimate expense and what doesn’t will often create challenges. Yes, there will be some abuses, but alternatives to this model are also bound to be disastrous.

And the incentives to take advantage of preferences (and the incentives for lobbyists to create them) are higher when tax rates go up — something that Joe Biden and his team may want to keep in mind if they’re in charge next year.

My ideal tax code would eliminate the double taxation of income — taxing the same dollar of income twice (or more). A typical example: taxing corporate income first through the corporate income tax and second through the individual income tax on dividends and capital gains. My tax code would restore “horizontal equity,” meaning that taxpayers making the same income pay the same amount of taxes. It would also broaden the tax base and lower rates. Many of these goals can be achieved by eliminating tax preferences that tilt the playing field in favor of politically connected interest groups.

Finally, this tax code wouldn’t be used to incentivize certain behaviors, which is a poor way to achieve these goals. If we want to encourage certain objectives, do it transparently through subsidies.

The sad truth is that we’ll never have an honest conversation about taxes as long as we don’t recognize that the tax code is an imperfect product of politics and so must also be reformed through the political process.

This Urban Safari Comes With a Warning: Watch Out for Snakes

The Epic Shamelessness of the Republican Convention