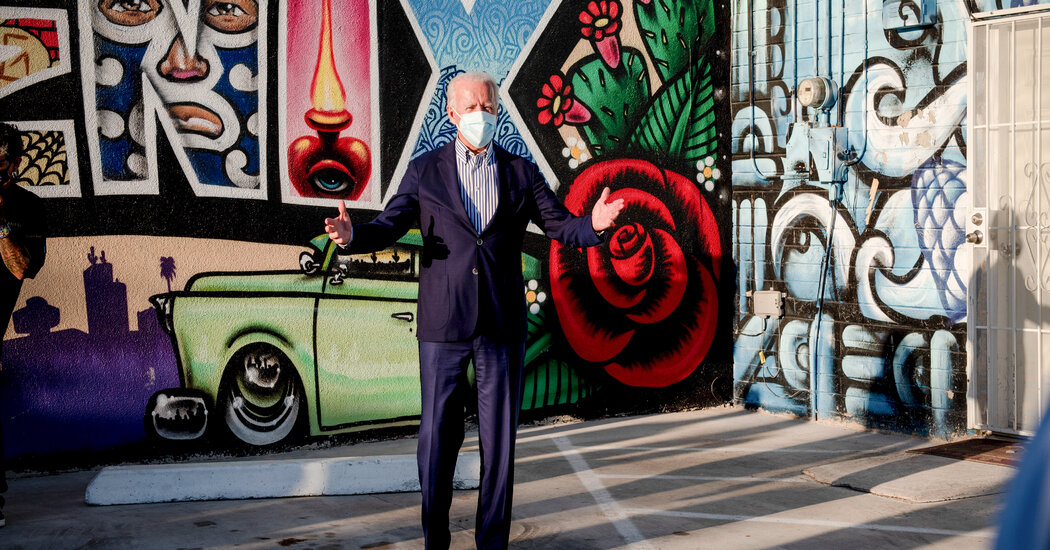 Arizona has not voted for a Democratic presidential candidate in 24 years, and the state has not been represented by two Democratic senators in over 65 years. So we find ourselves in a historically strange place: Joe Biden holds a small but consistent edge over the president, and Mark Kelly, the Democratic Senate candidate, holds a lead in his race against his Republican opponent, Martha McSally.

Why is Arizona suddenly a swing state?

The answer is frequently attributed to changes in the demographics of our electorate. It is true that Arizona’s population is increasingly urban, college-educated and Latino — trends that favor the Democratic Party.

What has changed is that more Republicans aren’t voting for the party’s candidate in elections for national office.

That gets to the heart of why Arizona has become a swing state. What partisans want is no longer necessarily reflected in what their parties have to offer — Arizonans, often moderate Democrats and Republicans, have been left up for grabs in the middle while major-party candidates have often moved to opposite ends of the ideological spectrum.

And that is an overlooked but essential factor to explain our swinging state: The Arizona Democratic Party is more effectively targeting its messages to align with the moderate voters of the state.

That is what we found when in recent weeks and in collaboration with the Arizona Policy Lab, we asked over 1,100 Arizonans about their views toward the candidates, parties and key issues. Arizona Democrats are disproportionately moderate, as are self-identified independents. Even nearly two-thirds of Republicans, typically the most ideological group in the state, describe themselves as either moderate or just leaning conservative.

We asked Arizonans to rate the state parties relative to the national parties on an ideological scale. Large proportions of both Democrats and Republicans view their own party in Arizona as more moderate than what they see in Washington. In other words, there is bipartisan agreement among Arizonans: Washington elites are farther out on the ideological extremes than the people who live here in our state.

Arizonans’ moderate perceptions are largely backed up by what they say about the issues. A fifth of Arizona Democrats, for example, support the construction of a border wall, which Mr. Biden has pledged to immediately halt. A majority of Republicans in Arizona support a pathway toward citizenship for undocumented immigrants who arrived in the United States as children — a program that President Trump has repeatedly tried to eliminate. Over a third of Republicans say that immigrants help Arizona’s culture, and 42 percent say that immigrants help our state economy.

When it comes to the coronavirus, over 80 percent of Republicans in Arizona report that they are often wearing a mask, and a majority support a mask mandate — something that Mr. Trump has refused to endorse.

Scholars have found that Americans generally misperceive members of the opposing party to be more ideologically extreme than they truly are. But remarkably, more than a third of Republicans say that Arizona Democrats are more conservative than the national Democratic Party. State-level Republicans, on the other hand, are seen as ideologically extreme, with 43 percent of Democrats and 44 percent of Republicans viewing state-level Republicans as more conservative than the national party.

The campaigns provide examples. Ms. McSally’s campaign is persistently trying to cast Mr. Kelly as a radical leftist: In the race’s only senatorial debate, Ms. McSally repeatedly referred to her opponent as “Counterfeit Kelly,” as she tried to portray him as a covert radical leftist. But Ms. McSally herself has struggled to convey a moderate stance: When asked during the debate, she would not say whether she was “proud” of her support for the president. Mr. Kelly is actually running a centrist campaign as he tries to appeal to Arizona’s moderate mind-set — just as Kyrsten Sinema did successfully against Ms. McSally in 2018.

We find that both Mr. Biden and Mr. Kelly are especially popular among those who rate Democrats in Arizona as more conservative than the national party. A recent Arizona Daily Star report suggests that nearly a fifth of Republicans in deep-blue Pima County are supporting Mr. Biden. Our statewide analysis shows 10 percent of Republicans supporting Mr. Biden — which, in a neck-and-neck contest, could make a lot of difference.

Demographic trends suggest that Arizona is moving to the left ideologically. But a better explanation might be that the state is moving toward the ideological center — and that’s where winning candidates place themselves.

Dr. Samara Klar and Dr. Christopher Weber are associate professors at the University of Arizona School of Government and Public Policy and co-coordinators of the Arizona Policy Lab.

How TikTok’s Talks With Microsoft Turned Into a Soap Opera