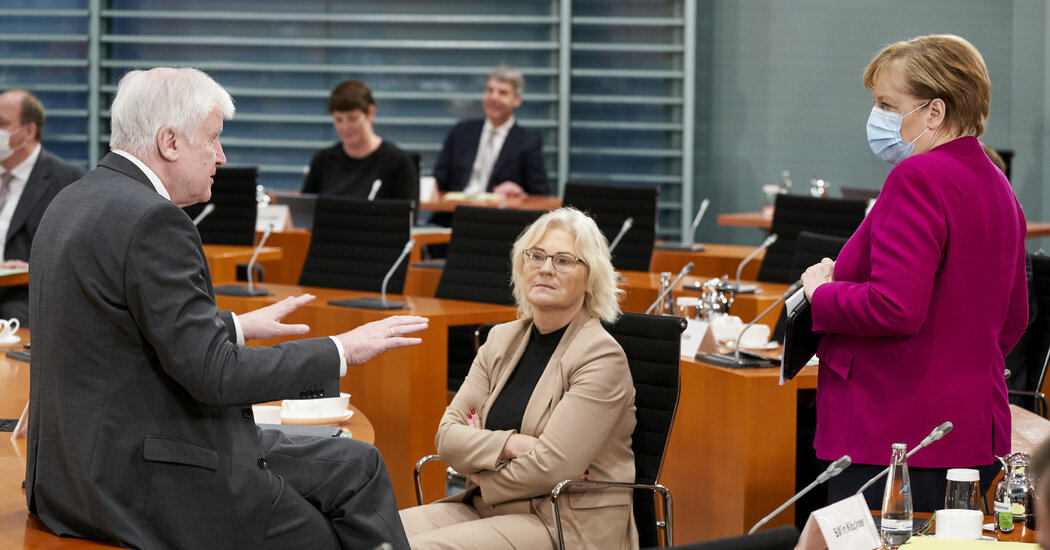 BERLIN — A dispute over grammar between two federal ministries has reopened a front in Germany’s longstanding battle about gender equality, forcing officials to redraft a debt protection bill.

Last month, the Justice Ministry presented a draft of the bill, which aims to shield debtors and businesses from insolvency in the wake of the coronavirus. While the bill drew little attention at the time, the draft language was written employing “Femininum,” a grammatical device that includes the use of the feminine form of plural nouns to describe groups that include both men and women.

An equivalent in English would be to refer to a group of both male and female actors collectively as “actresses.”

On Monday, the Interior Ministry announced that the draft would be rejected based on its use of the generic feminine form, dealing a blow to those who say the usual masculine marginalizes people who do not identify as men. In a country like Germany, where gender norms remain entrenched, the dispute shows how the traditional norms of language can become an obstacle to equality.

Christine Lambrecht, the justice minister who rolled out the draft bill, ran into resistance from the interior minister, Horst Seehofer, who warned that the document’s language could, in legal terms, exclude men from its protections. Steve Alter, a spokesman for the Interior Ministry, said that Mr. Seehofer’s objections were focused solely on the question of whether it was legally valid to use such language in a bill.

“The generic feminine for use for female and male people has not yet been linguistically recognized,” Mr. Alter said. “This applies completely independently of whether a certain social state is desired.”

German has gendered nouns — masculine, feminine and neutral — but as in several other European languages, the masculine form takes precedence when referring to groups of men and women, especially on official and legal documents.

Katrin Gottschalk, a deputy managing editor of the Berlin-based daily TAZ, said, “The current debate is important because we still haven’t found the language in which women and nonbinary people are not only meant to be, but also feel, addressed.”

“It’s not clear yet how we deal with that problem in the German language,” Ms. Gottschalk wrote in an op-ed on the draft bill and the debate it has unleashed.

Other countries with gendered languages have also grappled with the issue: In 2017, the French prime minister forbade the use of “inclusive writing” in official texts.

The debate over whether German usage should be changed to be more inclusive has been simmering for decade. .

The choice in private or professional settings is largely up to individuals or institutions — progressive news outlets in Germany, for example, often use gender-neutral language where possible — but the debate over the draft bill has raised the question to the federal level.

Several regional governments have already taken up the issue. This year, the state government of Saxony announced that it would start using gender-inclusive language in state laws. “The language of our laws is still shaped by a time when women and men did not have the same rights,” the state justice minister, Katja Meier of the Greens, said at the time.

And last year, the city of Hanover, then under the leadership of the Social Democratic Party, announced that it would adopt gender-neutral language in all its communication. The decision only ratified what had been common practice for more than a decade, but it was enough to prompt a group of 70 influential, mostly conservative figures to publish an public appeal against the policy.

Although language is not considered the most important battlefield for those fighting for a fairer and more inclusive society in Germany, the debate over the draft bill is the latest chapter in the long struggle for equality. Those efforts have included demands for more accessible child care, equal pay for men and women doing the same jobs and more female representation on corporate boards.

When a federal official made a passing suggestion to change the word “fatherland” to “homeland” in the German national anthem in 2018, it led to a minor political storm. The far-right party Alternative for Germany called it “gender nonsense.”

Ms. Lambrecht, the justice minister, is a member of the Social Democratic Party, the furthest left in Chancellor Angela Merkel’s governing coalition. Mr. Seehofer was the longtime head of the Christian Social Union, the conservative Bavarian sibling party to Ms. Merkel’s Christian Democrats.

The Justice Ministry said that using the feminine form in the draft bill was simply the easiest way to write it and that it was not meant to send a political message. “We weren’t trying to float a trial balloon,” Stefan Zimmermann, a spokesman, said.

The conservative German language association, VDS, criticized the draft text on the grounds that using the feminine form muddled the writing of legal documents.

Alternative for Germany was searing in its denunciation. “Legal texts are not a romping place for left-wing ideological craziness,” Stephan Brandner, a member of the party who sits in Parliament, wrote on his official Facebook page on Tuesday. In his post, Mr. Brandner compared the justice minister to a misbehaving toddler.

Katja Mast, a Social Democratic lawmaker who publicly defended the ministry’s decision to release the bill, wrote in an email that women still faced discrimination in Germany. “This also happens through language,” she noted, adding that she was grateful for the discussions.

In the end, political expediency won out. On Wednesday, the Justice Ministry submitted a new version of the bill to the cabinet.

“Because the project is of great importance to us and because it is important to us to reach an agreement between the ministries as quickly as possible, we have decided in favor of the conventional variant,” said Mr. Zimmermann, the spokesman for the Justice Ministry.

A Promising Life Is Cut Short, Becoming a Symbol of Lebanon’s Heartache

What All That Touch Deprivation Is Doing to Us