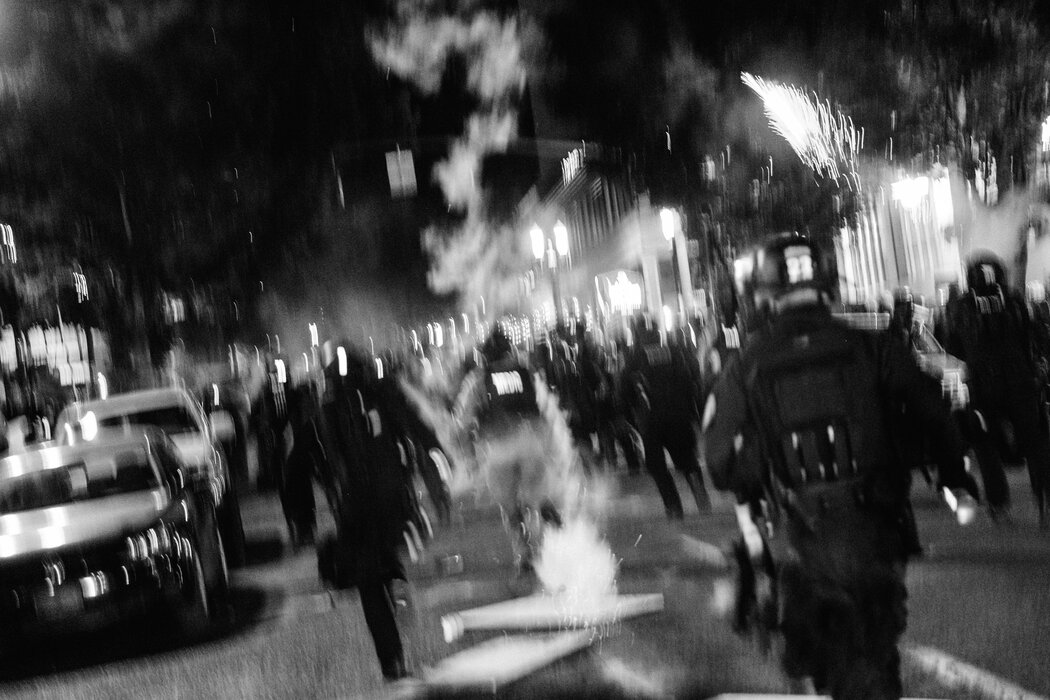 Kathleen Kingsbury, acting editorial page editor, wrote about the editorial board’s verdict on Donald Trump’s presidency in a special edition of our Opinion Today newsletter. You can read it here.

This month, federal and state authorities arrested 13 Michigan men on terrorism, conspiracy and weapons charges. Six of the men are alleged to have been plotting to kidnap the state’s governor, Gretchen Whitmer, with whom they were furious for imposing shutdowns, as most other governors did, in the early weeks of the pandemic.

Ms. Whitmer’s actions most likely saved thousands of lives. The arrested men, along with hundreds of other anti-shutdown protesters who swarmed the State Capitol in Lansing, considered her a tyrant.

As the protests grew in April, President Trump could have supported a governor navigating a tough situation and reminded Americans about the importance of stopping the spread of the coronavirus. Instead, he tweeted, “LIBERATE MICHIGAN!” — a message that has to date received nearly 200,000 likes and almost 39,000 retweets. He tweeted the same of other states with Democratic governors and said the Second Amendment was “under siege.” It was as though Mr. Trump saw himself as another anti-government insurgent.

The message seems to have come through loud and clear. Protesters became bolder, and some marched into the Michigan statehouse brandishing semiautomatic rifles and long guns, forcing a shutdown of the State Legislature. Many political leaders rightly condemned the armed display. Mr. Trump defended the protesters. “These are very good people, but they are angry,” he wrote on Twitter.

As Ms. Whitmer said after this month’s arrests: “Hate groups heard the president’s words not as a rebuke, but as a rallying cry. As a call to action. When our leaders speak, their words matter. They carry weight. When our leaders meet with, encourage or fraternize with domestic terrorists, they legitimize their actions, and they are complicit. When they stoke and contribute to hate speech, they are complicit.”

Even after the arrests and charges, Mr. Trump has refused to rebuke violent agitators. Instead, he keeps feeding the fire. Speaking on Fox Business on Thursday, he said of Ms. Whitmer: “She wants to be a dictator in Michigan. And the people can’t stand her.”

A president’s words are among his most powerful, and potentially dangerous, tools. They can rally the American public to work together toward a common cause. They can soothe the jangled nerves of a frightened nation, or provide a healing balm at a time of mourning. They can move global financial markets, start wars — and embolden violent individuals.

From the start of his campaign for president in 2015, Mr. Trump has gleefully upturned every expectation Americans had about how their presidents speak. He revels in crude insults, trivial gripes and constant mockery of those who disagree with him.

This is harmful on many levels. “The president isn’t just the chief of the executive branch, but the head of state,” said Ian Bassin, who worked in the White House Counsel’s Office during the Obama administration and now runs the nonprofit group Protect Democracy. “That means part of what the presidency is about is norm-setting. When a president establishes that it’s OK to make fun of people with disabilities, or to be racist, or to lie, or to assault women, you see that replicated in society. That’s not a surprise.”

Mr. Trump doesn’t just mock his enemies. He demonizes and dehumanizes them. His attacks have resulted in his targets — whether a lawmaker like Representative Ilhan Omar of Minnesota, a television personality like the former Fox News anchor Megyn Kelly, a government scientist like Dr. Anthony Fauci, or a regular American citizen — getting swamped with death threats, and in some cases requiring personal protection.

The violent rhetoric, and its consequences, began almost as soon as Mr. Trump’s campaign for the White House did.

In August 2015, barely two months after Mr. Trump announced his presidential bid by accusing Mexican immigrants of being “rapists,” two Boston men beat a homeless man with a metal pipe and then urinated on him. “Donald Trump was right,” one of the men said, according to the police. “All these illegals need to be deported.”

Mr. Trump tweeted out a condemnation of the attack, calling it “terrible” and saying, “I would never condone violence.” But repeatedly on the campaign trail, he did just that.

At a February 2016 campaign rally, he told his supporters: “If you see somebody getting ready to throw a tomato, knock the crap out of them, would you? Seriously. Just knock the hell out of them. I promise you, I will pay for the legal fees.”

A few weeks later he said of one protester, “I’d like to punch him in the face, I’ll tell you.”

At another rally, a protester being escorted out by the police was sucker-punched. Mr. Trump called the attack “very, very appropriate” and the kind of action “we need a little bit more of.”

In August 2016, he warned that if Hillary Clinton was elected, she would appoint Supreme Court justices who would rule in favor of gun-control laws. “Nothing you can do, folks,” Mr. Trump said, before adding, “Although the Second Amendment people — maybe there is, I don’t know.”

This language was dangerous enough coming from a candidate. With Mr. Trump’s ascension to the most powerful job in the country, the stakes got only higher, and his reach broader.

A few months after his inauguration, he told a gathering of police officers that they should rough up the people they arrest. “Please don’t be too nice,” Mr. Trump said, to laughter and cheers.

When a Republican representative from Montana physically assaulted a reporter who had asked a question, Mr. Trump praised the lawmaker. “Any guy that can do a body-slam,” Mr. Trump said, “he’s my guy.”

In May, Mr. Trump responded to protests against police brutality by saying, “when the looting starts, the shooting starts.” When the shooting did start, he defended one person accused of gunfire: a 17-year-old boy who drove 20 miles to a Wisconsin protest armed with a semiautomatic rifle, which he allegedly used to shoot three people, killing two of them. It was self-defense, Mr. Trump suggested days after the teenager was charged with murder.

At the presidential debate last month, Mr. Trump was asked to condemn white supremacists without equivocation. He would not. Instead, he instructed the violent right-wing group the Proud Boys to “stand back and stand by.”

Mr. Trump and his defenders regularly claim that he is being misunderstood and say that he has condemned violence and white supremacy more than any president in history. The president is asked to condemn violence so often because violence is so often committed in his name. The Proud Boys, for one, did not take his words as a condemnation. “I think he was saying I appreciate you and appreciate your support,” the group’s founder said after the debate.

Trump supporters are not the only people who commit acts of political violence. But Mr. Trump has been invoked in dozens of acts of violence, threats of violence or allegations of assault, according to a review of five years of criminal cases by ABC News.

The victims of some of the worst attacks have been from the minority groups that Mr. Trump so often targets with his words. In addition to the 2015 attack on the homeless man in Boston, there was the terror campaign involving more than a dozen pipe bombs sent to prominent journalists and critics of Mr. Trump by a Trump supporter. There was the massacre in an El Paso Walmart that left 23 dead; minutes before the attack, the 21-year-old suspect said he was doing it as a response to “the Hispanic invasion of Texas.” And there was the slaughter of 51 people during prayer in two New Zealand mosques by a right-wing zealot who said he saw Mr. Trump as “a symbol of renewed white identity and common purpose.”

In 2017, a federal judge in Kentucky ruled that Mr. Trump could be sued by protesters who had been assaulted at a 2016 rally where he had said, “Get ’em out of here!” That statement was “an order, an instruction, a command,” the judge said, and the protesters’ injuries were “a direct and proximate result” of Mr. Trump’s words. The case was dismissed on appeal, but the judge was right: Mr. Trump’s supporters know that his first response is the truest expression of his beliefs, and Mr. Trump, for all his dissembling, knows exactly what he is saying.

This harm won’t end with Mr. Trump’s presidency. His toxic rhetoric has filtered down to elementary and secondary schools around the country, where children have been repeating the president’s most vile language for the past five years. In hundreds of cases, children have reported being mocked, harassed or attacked for being Hispanic, Black or Muslim, according to a survey by The Washington Post. Many of the incidents have made reference to Mr. Trump’s border wall, including one case last year in which a 13-year-old New Jersey boy told a Mexican-American classmate that “all Mexicans should go back behind the wall.” Soon after, the 13-year-old assaulted the boy and knocked his mother unconscious.

“It’s gotten way worse since Trump got elected,” said Ashanty Bonilla, a Mexican-American high school student who endured so much ridicule from classmates that she changed schools. “They hear it. They think it’s OK. The president says it. … Why can’t they?”

The Conspiracist in Chief Will Save Us All

On the Shores of Cape Cod, Where the Oyster Is Their World