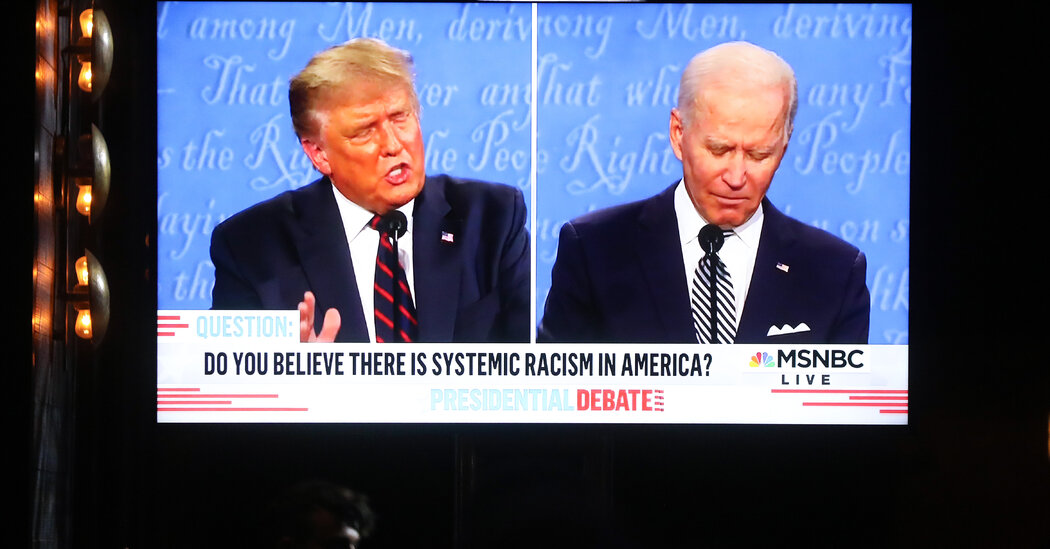 The presidential candidates are responding to questions from voters in prime time on Thursday at two live, nationally televised town-hall-style events. Unusually, the programs are being broadcast at the same time on rival networks, although recordings of each event will be available afterward.

Joseph R. Biden Jr. is appearing at an ABC News forum held at the National Constitution Center in Philadelphia and moderated by the ABC anchor George Stephanopoulos. The 90-minute event began at 8 p.m. Eastern time and will be followed by a 30-minute wrap-up featuring analysis from ABC political reporters and pundits.

About 20 voters from across Pennsylvania, of varying political views, are on hand to ask Mr. Biden questions. Mr. Stephanopoulos is guiding the discussion and asking follow-up questions.

Mr. Biden’s town hall can be seen on ABC television stations and on ABC News Live, an online service that can be watched on Hulu, YouTube TV, Sling TV and other streaming platforms, as well as on the ABC News website.

President Trump’s NBC News event is being held outdoors at the Pérez Art Museum in Miami and is being moderated by the “Today” show host Savannah Guthrie. The broadcast started at 8 p.m. Eastern and is expected to last for about an hour.

About 60 Florida voters are in the audience to ask the president questions; some of the voters are undecided, and some are leaning toward supporting one of the candidates. NBC said it was not discussing the question topics in advance.

The Trump town hall is airing on NBC broadcast affiliates and the cable channels CNBC and MSNBC. It is also being streamed on NBC News NOW, an online service available on numerous streaming platforms, and available to watch on demand after the broadcast on Peacock, the NBCUniversal streaming service.

The event is also available in Spanish on the digital sites of Telemundo, the Spanish-language television network.

The New York Times is covering the simultaneous events live, with real-time analysis from teams of reporters watching both candidates, on nytimes.com.

A virus cluster erupts in the Arkansas Legislature and the state surgeon general’s family.

Mexico City’s mayor tests positive as the city grapples with a surge in cases.

Gen Z Will Not Save Us

A virus cluster erupts in the Arkansas Legislature and the state...

Mexico City’s mayor tests positive as the city grapples with a...