Former Jammu and Kashmir chief minister Farooq Abdullah on Monday stated that the “fight for the restoration of Article 370 and resolve will never change even if I’ve to be hanged” after the Enforcement Directorate (ED) questioned him. The ED questioned him in connection with a money-laundering probe related to a multi-crore scam in the Jammu and Kashmir Cricket Association, officials said.

He added, “This questioning has been going on for many years, it is nothing new. I am not going to say anything. The Court will decide what is to be done. I am not worried.” 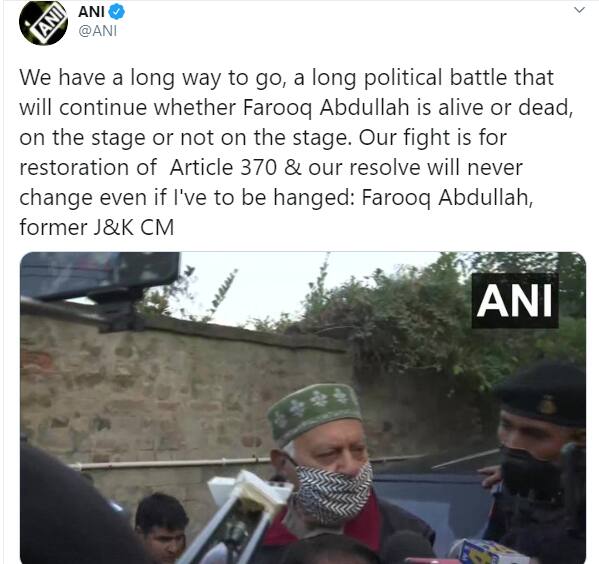 Several constituents of the newly formed People’s Alliance, comprising mainstream political parties from Jammu and Kashmir, described Abdullah being summoned by the ED as a “witch hunt” and “political vendetta” by the Centre.

The 82-year-old National Conference president was questioned at the agency’s regional office at Raj Bagh in the case connected to the embezzlement of more than Rs 40 crore of JKCA funds. He received the summons a day after the formation of the People’s Alliance was announced in the Gupkar declaration on October 15. 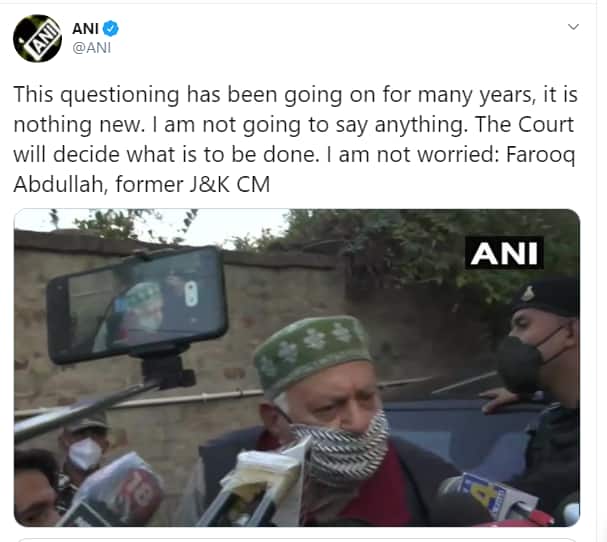 Officials said Abdullah’s statement will be recorded under the Prevention of Money Laundering Act (PMLA). The Lok Sabha MP and former JKCA president, who was also questioned in the case in Chandigarh in July last year, is being asked about his role and decisions taken when the alleged fraud took place in the association, they said.

The ED case is based on an FIR filed by the CBI, which booked former JKCA office-bearers, including general secretary Mohammed Saleem Khan and former treasurer Ahsan Ahmad Mirza. The CBI later filed a charge sheet against Abdullah, Khan, Mirza as well as Mir Manzoor Gazanffer Ali (former JKCA treasurer) and former accountants Bashir Ahmad Misgar and Gulzar Ahmad Beigh for the “misappropriation of JKCA funds amounting to Rs 43.69 crore” from grants given by the Board of Control for Cricket in India (BCCI) to promote the sport in the state between 2002-11.

The ED said its probe found that JKCA received Rs 94.06 crore from BCCI in three different bank accounts during financial years 2005-2006 to 2011-2012 (up to December 2011). The ED alleged that several other bank accounts were opened in the name of the JKCA into which the funds were transferred. The bank accounts along with the existing bank accounts were later used for laundering JKCA funds.
Abdullah’s son and NC leader Omar Abdullah said the ED action was “…Nothing less than political vendetta” and came days after the formation of the People’s Alliance for Gupkar Declaration.

“To set the record straight no raids are being conducted at Dr Sahib’s residence,” he said on Twitter. Other leaders spoke up too. PDP leader and former Jammu and Kashmir chief minister Mehbooba Mufti said the ED’s “sudden summons to Farooq sahab displays the extent of GOIs nervousness about mainstream parties in JK fighting as one unit. (it) Also reeks of political vendetta and won’t in the least blunt our collective resolve to fight for our rights,” she said on Twitter.

People’s Conference leader Sajjad Lone also said the move reeked of vendetta. “What a sorry state of affairs. Dr Farooq sahib summoned by ED. Reeks of vendetta. Contrary to what they want to coercively achieve this will certainly have the opposite impact,” he tweeted.
The National Conference issued a statement saying the BJP was indulging in “coercive” measures by employing its agencies after it had failed to politically fight Abdullah.

“The ED summons to Dr Farooq Abdullah is clearly the result of the unity that Dr Sahib has been able to forge among mainstream political parties in Jammu and Kashmir. “This is the price one faces when opposed to BJP’s ideology and divisive politics. Recent history is a witness to how BJP has been employing coercive and intimidative measures through various departments to target opposition leaders across the country…,? it said.

The NC said “the timing of the recent summons is very clear” as his previous summons was just before August 5 last year — when the Centre revoked Jammu and Kashmir’s special status under Article 370 and bifurcated the state into two union territories. The statement said its president continues to maintain “his innocence and will cooperate with the authorities in what is nothing but a witch hunt.”

In February 2020, the ED attached assets worth Rs 2.6 crore of Mirza and Gazanffer, a member of the finance committee of the JKCA. The agency had then said Mirza transferred huge amounts into his personal bank accounts, and the money was further transferred or withdrawn in cash. “Out of the laundered amounts, Rs 1.31 crore was received by Gazanffer who was a member of the finance committee of JKCA between 2006 to 2009. This committee was arbitrarily constituted by Dr Farooq Abdullah, the then President of JKCA,” the ED claimed.

The court stay was vacated the same year and Gazanffer was not given charge of treasurer. Instead, Farooq Abdullah constituted a finance committee comprising Mirza and Gazanffer and both were empowered to jointly operate JKCA bank accounts, it said. The two “opened a personal bank account” in their joint names with Jammu and Kashmir Bank and crores of funds belonging to JKCA were transferred into it, the agency alleged. These funds were either withdrawn in cash or transferred to other bank accounts including the bank account of Mirza’s firm, it added.

In 2011, Mirza was elected JKCA general secretary and Farooq Abdullah president. During the period, JKCA funds were continuously laundered, the ED alleged.. “From 2004 till March 2012, Mirza continued as the authorised signatory in the bank accounts of JKCA,” it said.

Mirza was arrested by the ED in this case and a chargesheet under the PMLA has also been filed before a special court in Srinagar.
Immediately after revoking the state’s special status on August 5, a host of political leaders, including the two Abdullahs and Mehbooba, were booked under the draconian Public Safety Act.

While the Abdullahs were released on different days in March this year, Mehbooba’s PSA was revoked on October 13, nearly 14 months after she was detained. Two days after her release, on October 15, a meeting was held at the residence of Farooq Abdullah where parties, including the NC, PDP, CPI-M, Awami National Conference and other smaller groups, announced the formation of the People’s Alliance which would seek restoration of special status to Jammu and Kashmir.

The House Moves to Avert a Shutdown