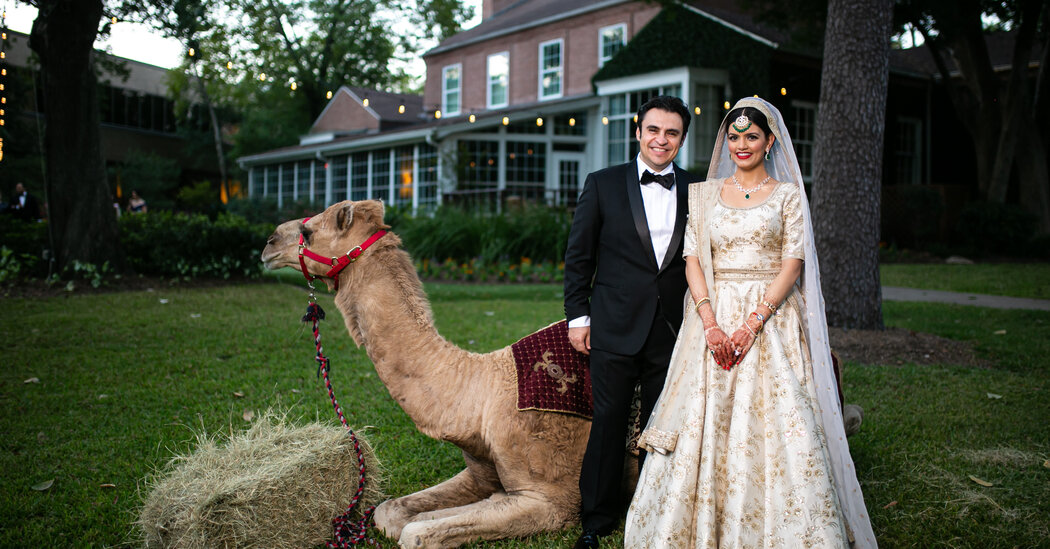 Alia Mohammed’s favorite subjects — energy, oil and her hometown Houston — may not be catnip to most suitors. But for Saamir Elshihabi, they sparked electricity.

Ms. Mohammed, 34, and Mr. Elshihabi, 46, met in 2014, when he was working in Abu Dhabi, United Arab Emirates, for Occidental Petroleum, an American energy company, and she was a policy adviser in the Energy and Commerce Departments in Washington. Her job was to help American energy companies expand their presence overseas; his was to maximize Occidental’s business opportunities.

“We had started to collaborate with the U.S. government, and her boss pushed an email to her and said, ‘Can you manage this account with this company?’” Mr. Elshihabi said. A work correspondence was born as Ms. Mohammed tried to help Mr. Elshihabi figure out how to best make use of government advocacy resources.

The acquaintance felt strictly professional to both until 2015, when Mr. Elshihabi took a new job with Occidental in Houston. “I had known from some of our correspondence that she was from Houston, and I remember telling her that I didn’t have any family there and I didn’t know anyone,” he said. He asked her for the usual recommendations: neighborhoods, grocery stores, restaurants.

Ms. Mohammed was thrilled. “I don’t know if you can tell, but I’m kind of a chatterbox when it comes to energy, oil and Houston,” she said. First she advised him over the phone, then she started showing him around town on her monthly trips home. Romance was in the air, but it went mostly unacknowledged until Mr. Elshihabi started making occasional weekend visits to Washington.

“I consider myself an East Coaster,” said Mr. Elshihabi, who grew up in New York and Washington, but spent a dozen years in Abu Dhabi. “I liked the idea of having someone I could visit in Washington.”

He especially liked that this someone was Ms. Mohammed. Over lunch at the Hamilton, a downtown Washington restaurant, in 2016, he ventured past their usual energy industry talk. “I asked her, What’s your view on kids and parents and how we take care of them as we get older?” He found her answers as smart as they were heartfelt, and started thinking he would like to build a future with her. But, he said, “we knew we wouldn’t be able to make it work unless we were in the same city, that only then would we be able to figure it out.”

The boundaries of their relationship got less blurry after the 2016 presidential election, when Ms. Mohammed, who had hoped to land a position in the administration of the first female president, instead found herself packing up her office and moving home to Houston in the spring of 2017. By summer, they had fallen in love.

Mr. Elshihabi’s background is Syrian; Ms. Mohammed’s is Indian. But both are Muslim, which laid the groundwork for a smooth introduction to each other’s families. “We come from different Muslim traditions, but the core is 98 percent the same,” Mr. Elshihabi said. “We also realized we had a similar upbringing, with less religious teachings and more moral teachings.”

By the time Mr. Elshihabi proposed, during a late night walk around Ms. Mohammed’s Houston neighborhood on June 28, they had gone over the details of their joint vision of the future with a fine-toothed comb. “Locked down in Houston, we had a lot of quality time to talk,” said Ms. Mohammed, now director of external relations at the energy company Ocean Petroleum, and the founder of her own jewelry line, Alousha.

On Oct. 10, Ms. Mohammed and Mr. Elshihabi were married by Sheikh Refaat Elsayed, the imam at the Muslim American Society mosque in Katy, Texas, before a few family members at the home of the bride’s parents. “One type of energy brought us together, but a very different one wouldn’t let us stay apart,” Ms. Mohammed said.

A Summer Without Superheroes